But watching how the fake news blew through the conservative ecosystem is illuminating.

The lib-owning idea went something like this: Nancy Pelosi and her ilk have overreacted to COVID-19 at every turn. Ron DeSantis is a freedom loving governor of the greatest state in America. And now Pelosi was all but admitting that DeSantis was right by spending $25 million on Florida real estate. What an elitist hypocrite!

The story appeared to get its start on a fringe webpage called Big League Politics. Note the site’s ads. You can’t make this stuff up. 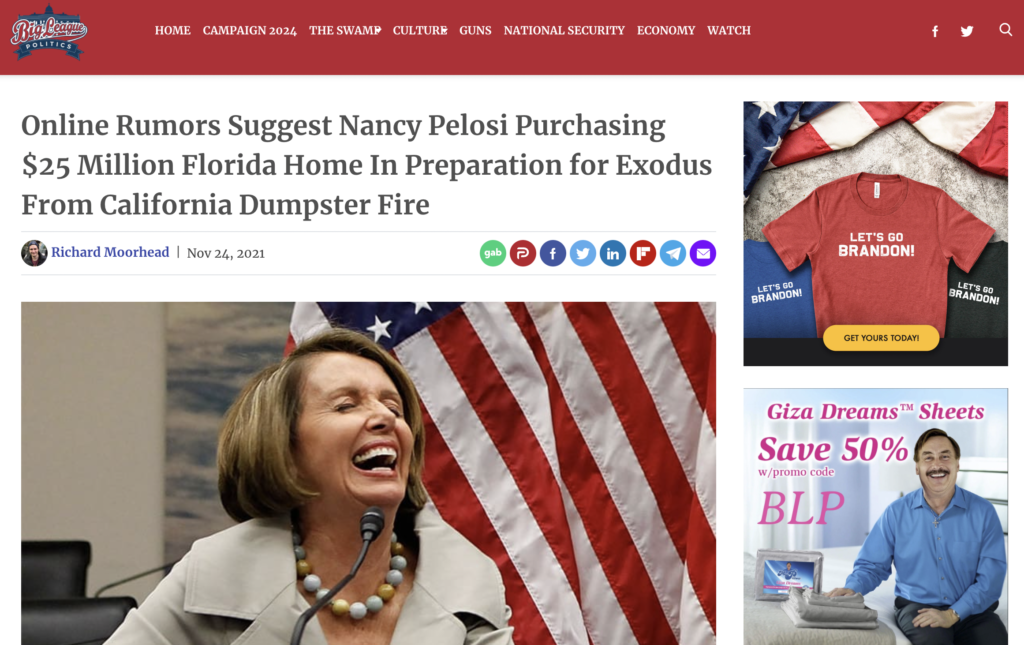 Here’s how the story was sourced:

Corrupt Democrat oligarch Nancy Pelosi is reportedly finalizing the purchase of a $25 million mansion in South Florida, departing California amid the state’s decline as a result of policy she’s long supported.

Pelosi is slated to become a resident of Jupiter Island in Martin County, an elite community with the distinction of its residents possessing the highest per capita income of any municipality in the United States.

Sources cited elite South Florida real estate brokers who confirmed Pelosi was in the closing stages of the purchase of the property.

Just checked with top broker in area who confirmed this information

Pelosi was observed scouting out properties in Florida earlier this year, with some speculating the powerful Speaker of the House and oligarch would retire in the aftermath of the 2022 midterms.

In case you’re wondering about the sourcing, that @gabehoff tweet seems to have disappeared. And as for the idea that Pelosi has been “house hunting” in Florida, that link goes to another Big League Politics story which makes the assertion based on a tweet from Marjorie Taylor Greene.

So this wasn’t crackerjack stuff to begin with.

The Big League Politics story was then picked up by Fox News contributor and “Investigative Reporter” Sara Carter’s site, though the story on Carter’s site carries the byline of “Staff Writer.”

As is usually the case, after these fringe outlets write vague, unsourced stories, slightly more respectable conservative sites aggregated them under the guise of “according to” various “reports” without noting how disreputable the sources of the reports are, or making any attempt to confirm them. These aggregations exist solely to farm clicks.

Pelosi, one of the richest members of Congress, reportedly owns nine properties worth a combined total of more than $20 million already. But if she picks up the 10,000-square-foot beachfront property on prestigious Jupiter Island, it would give the speaker a big presence in a state led by defiant Republican Gov. Ron DeSantis.

Several south Florida Twitter users say they have sources confirming that Pelosi is in fact buying the house, which is listed for sale on several real estate sites. Local property tax records list the home as having last changed hands in 2015 and still list that buyer as the current owner. But Zillow and other listing services state that a sale is “pending.”

That same reporter, Haisten Willis, eventually re-wrote the story—still leading with a slightly altered paragraph—and no indication that the story had been edited:

An internet rumor that House Speaker Nancy Pelosi is purchasing a $25 million mansion on Florida’s Atlantic coast, just 25 miles from former President Donald Trump’s Mar-a-Lago home, may just be too juicy to be true.

Note the word “may”—as if no one really knows if this rumor is true or not. It’s not until four paragraphs later that Willis gives the relevant information:

Drew Hammill, Pelosi’s deputy chief of staff, told the Washington Examiner the speaker of the House has no interest in buying a house in the Sunshine State.

“This is completely false,” Hammill said. “There’s no such pending sale nor is the family looking or interested.”

So random people on Twitter said that Pelosi had already bought a $25 million dollar house. Pelosi’s office called the story “completely false.” And the Washington Examiner could only say that the story “may just be too juicy to be true.” After all, can any of us truly know anything?

By then, the DeSantis stans and were on the case. The governor’s spox, Christina Pushaw—whose Twitter bio says she is here to “debunk false Narratives about Florida…”—tweeted out the story with a hand smack to the face emoji. 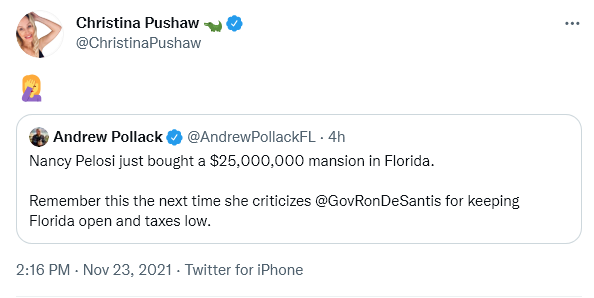 Sean Hannity also tweeted it out

As did Dinesh D’Souza:

The good news is that someone was willing to do actual journalism.

The bad news is that the someone was Realtor.com, where a writer named Claudine Zap—who does not appear to be an “investigative reporter” at Fox News—actually made some calls, got to the truth, and wrote a responsible piece headlined “No, Nancy Pelosi Did Not Buy a $25M Mansion in Jupiter Island, FL.”

“This is completely false,” said Drew Hammill, deputy chief of staff for the speaker. “There’s no such pending sale, nor is the family looking or interested.”

The $25 million mansion in question is pending sale, which means the property has found a buyer. It’s just not Pelosi.

“I have no idea where the rumor started in regards to Nancy Pelosi,” says the listing agent, Beth Bourque with Southern Shore Properties, who has been swamped with calls for the last week asking about the supposed Pelosi purchase.

“I keep saying I can’t disclose who the buyer is, but it’s not Pelosi,” she says.

The new owners are just as displeased by the unwelcome fuss about their newly purchased home.

I’m sure the corrections and apologies will be flooding in now that Realtor.com has done the shoeleather journalism to debunk this wildly false claim. 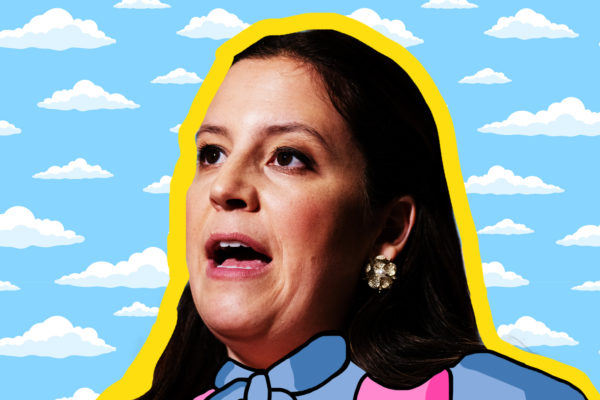