In the Final Turn, Oz is Closing

The Pennsylvania Senate race between Democrat John Fetterman and Republican Mehmet Oz is as tight as can be, but Oz has clear momentum. The middle columns in the table below are drawn from the USA Today/Suffolk University conducted Oct. 27-30—entirely after the candidates’ debate last week. The column on the right shows how far each category has shifted since the previous iteration of the same poll, conducted Sep. 27-30. 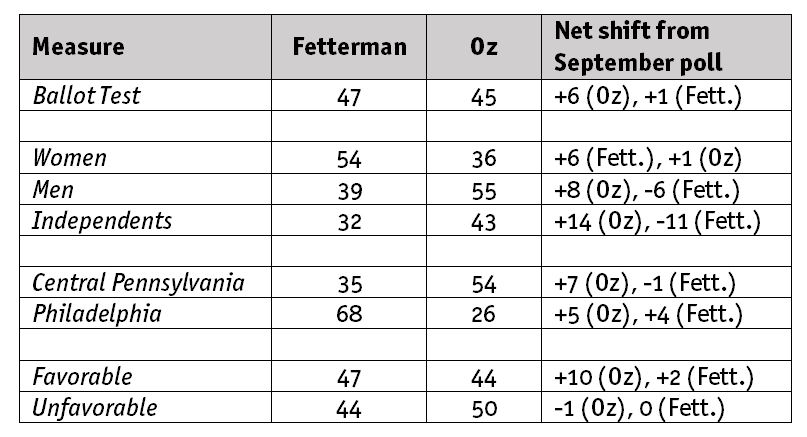 The first thing to note is that is that virtually all the improvements we see in this poll have gone to Oz. He’s cut Fetterman’s lead to 2 points, down from 6 a few weeks ago. In terms of favorability, Fetterman is still in the black but his unfavorable rating is up 17 points since June. We see virtually identical gender gaps for the candidates, with Oz having a 16-point lead among men and Fetterman leading by 18 points among women. Oz has improved his favorability rating by 10 points but is still 6 points underwater. That’s not great, but it is 11 points better than the previous month’s poll (when he was 17 points underwater) and 16 points better than the June survey (when he was 22 points underwater) . Still, in June, 51 percent of Pennsylvania voters viewed Oz unfavorably, and today 50 percent of the voters continue to view him unfavorably. Oz just isn’t likable and that’s probably his biggest liability heading into Tuesday.

So, what underlies the change in the topline ballot test? In addition to his challenges among men, independent voters have swung sharply away from Fetterman and toward Oz. Oz currently has an 11-point lead among independents while just a month ago Fetterman was winning independents by 14 points, a massive 25-point swing. In June, Fetterman was leading among independents by 20 points. In the GOP heartland between Philadelphia and Pittsburgh, what James Carville called “the Alabama of Pennsylvania,” Fetterman has ticked down about 5 points since June while Oz has moved up from 46 percent to 54 percent. Not calamitous for Fetterman but a serious “coming home” effect. Oz has also improved by 5 points in the Philadelphia region over the last month, which is probably largely an effect of his surge among men, but Fetterman has ticked up by 4 as well, making the changes a wash in relative terms.

It is unclear what accounts for these changes. In the new survey, only 7 percent of voters say Fetterman’s stroke persuaded them to vote against him with 78 percent of those voting against him saying that they would have voted against him with or without the stroke. It is hard to imagine that Fetterman’s debate performance didn’t have some effect, perhaps especially among independents, but that may have been blunted by Oz’s offsetting gaffe when he suggested decisions about abortion should be left to women, their doctors, and Doug Mastriano. (OK, he actually said “local officials” but the point remains.)

To invert an old expression, defeat has more than one father. The debilitating effects of the stroke have hurt Fetterman politically even if his health doesn’t represent a serious challenge to being a senator. (Having worked in the Senate for twelve years and witnessed the end games of figures like Strom Thurmond, Robert Byrd, and Quentin Burdick, I’d say Fetterman’s more than physically robust enough to work in what’s sometimes referred to as the World’s Greatest Nursing Home.)

But that’s only part of Fetterman’s problem. The other part is that he’s seriously left-wing in a purple state that hasn’t elected a progressive to the Senate since . . . ever? While a normie Republican in the mold of Arlen Specter, Pat Toomey, or even (the 1994 version of) Rick Santorum probably would’ve put Fetterman away long ago in such strong Republican year, Oz’s daytime TV strangeness (remember that rock-solid 50 percent unfavorable rating) has kept Fetterman in the race. Now the underlying makeup of the state and the problems of the economy, inflation, and crime are catching up with him.

Fetterman’s opening chapters of the campaign with their focus on his pro-wrestling demeanor and self-presentation with its brilliant (and fun) Twitter jabs were evanescent in a year that tilts toward Republicans. Once those gambits started to falter and Oz gained his footing (he’s a lot of things but actually stupid isn’t one of them), Fetterman’s progressive views have left a rather bare cupboard from which to choose. On a lot of questions other than abortion, Fetterman’s platform is a tough sell among suburban voters concerned about the economy. Voters may like him (or perhaps “may have liked him” would be more accurate) but they don’t have a natural affinity with his positions, and the effects of his stroke make it hard for him to argue for them. If Oz wins, Democrats will have to decide whether they want primaries to be purity contests similar to the GOP’s or about pro-democracy electability. Just because the other side nominates crazy doesn’t mean you can, too.

Last thought: Part of Democrats’ theory of elections is to “book votes early”—that is, to rely heavily on early voting so that the party can focus its Election Day effort on getting lower-propensity voters to the poll. According to the new Suffolk survey, 75 percent of Democrats have already voted while just 19 percent of Republican voters have availed themselves of that option. Since Pennsylvania doesn’t allow absentee votes to be counted until Election Day, we’re likely to see a very distorted picture on Tuesday night. If the race turns out to be as close as this poll says it is, we may not know who the next senator from Pennsylvania is until Thanksgiving.