Is Trump Losing the Culture War?

NASCAR, renaming the forts, and the politics of kneeling.
by Charlie Sykes
The NASCAR Series flag flies alongside the old Confederate Stars and Bars battle flag during the NASCAR Winston Cup Series Primestar 500 race on 9 March 1997 at the Atlanta Motor Speedway, Hampton, Georgia, United States. (Photo by Darrell Ingham/Allsport/Getty Images)
Share on Facebook Share on Twitter Share via email Print

Until now, Trump has seemed to have an almost reptilian instinct for tapping into the Zeitgeist. Amid his crudity, he has been able to read the darker impulses of the culture to exploit simmering, even dormant, frustration and fear.

He rode those cultural anxieties to the White House and hopes to stoke them again. So his campaign is essentially: Cry havoc and let loose the tweets of culture war. Play the usual cards of racial anxiety, patriotism, law and order, caravans, rapist immigrants, China, deep state, antifa, the media, and socialism.

But has Trump lost the narrative here? Is heable to read the room? Or is he merely content to create his own room and populate it with MAGAites?

For a candidate who has thrived on cultural conflict this is not a trivial question: is he suddenly losing the culture war?

Consider three scenes from the battlefront: NASCAR, the forts, and the politics of kneeling.

In February, Trump was the grand marshal of the Daytona 500. These are his people. The applause was thunderous. On Wednesday, NASCAR banned confederate flags.

The move comes amid social unrest around the globe following the death in police custody of George Floyd, an unarmed black man in Minneapolis. Protests have roiled the nation for days and Confederate monuments are being taken down across the South — the traditional fan base for NASCAR.

Bubba Wallace, NASCAR’s lone black driver, called this week for the banishment of the Confederate flag and said there was “no place” for them in the sport. At long last, NASCAR obliged.

“The presence of the confederate flag at NASCAR events runs contrary to our commitment to providing a welcoming and inclusive environment for all fans, our competitors and our industry,” NASCAR said. “Bringing people together around a love for racing and the community that it creates is what makes our fans and sport special. The display of the confederate flag will be prohibited from all NASCAR events and properties.”

Even as NASCAR made its move, Trump was doubling down on his defense of the Confederate legacy, by refusing to allow the renaming of U.S. military bases that honor defeated southern generals. 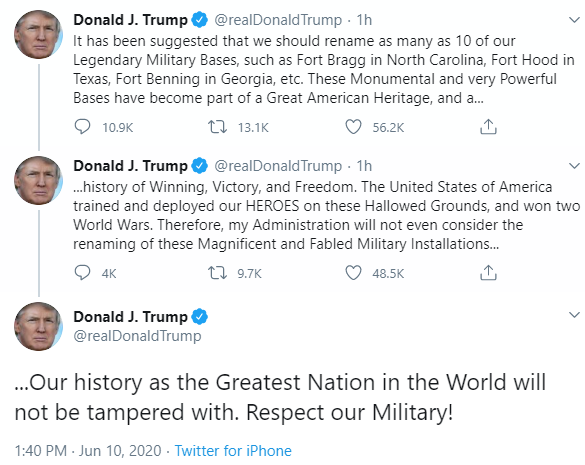 As the New York Times reminds us:

Today, Beauregard has a U.S. Army base in Louisiana named after him. Anderson does not.

What side of the political divide would you like to be on this one? The Lincoln Project was quick to jump on this issue:

Trump made clear today which flag he stands with. The one that stands for failure, disunion, and oppression. #AmericaOrTrump

And then there is the NFL.

In September, 2017 Trump thought he had stumbled on a potent wedge issue. Speaking in Alabama, Trump called on team owners to fire players who took a knee during the playing of the national anthem. “Wouldn’t you love to see one of these NFL owners, when somebody disrespects our flag, to say, ‘Get that son of a b—- off the field right now. Out! He’s fired. He’s fired,'” Trump declared.

He relished the fight. In his book, Team of Vipers, Cliff Sims quotes Trump gleefully predicting that the NFL protests would be a potent issue in his re-election bid.  “The Democrats – you watch – they’re going to nominate a kneeler,” Trump says, “2020 will be fun, that I can tell you – a lot of fun … the kneelers! Just watch”

This week, he sounded the note, when he lashed out at the conciliatory remarks by NFL commissioner Roger Goodell.

Could it be even remotely possible that in Roger Goodell’s rather interesting statement of peace and reconciliation, he was intimating that it would now be O.K. for the players to KNEEL, or not to stand, for the National Anthem, thereby disrespecting our Country & our Flag?

So Trump is still convinced that going after the “sons of bitches” in the NFL who knelt in silent protest was a winning issue for him.  But how will it actually play this November?

All of this comes at a moment when public opinion sees to be undergoing a tectonic shift. Look at these numbers from the NYT: “Over the last two weeks, support for Black Lives Matter increased by nearly as much as it had over the previous two years, according to data from Civiqs, an online survey research firm. By a 28-point margin, Civiqs finds that a majority of American voters support the movement, up from a 17-point margin before the most recent wave of protests began.” While Trump appears fixated on the playbook of 1968, there is more evidence that the public is moving in the opposite direction. Polls show nearly three-quarters of Americans say they support the peaceful protests that have spread throughout the country since the killing of George Floyd at the hands of Minneapolis police. As the Wapo notes: “he recent demonstrations have bipartisan appeal, with 87 percent of Democrats saying they support them, along with 76 percent of independents. Among Republicans, the majority — 53 percent — also back the protests.”

Trump’s instincts tell him to keep firing up his base, which is already en fuego. He’s bringing back the rallies. He’s going to recite the snake poem; he’s going to play the hits. He won’t move to the center or try to heal. Instead, he’ll do what he always does: turn up the volume of chaos and hope that the Democrats will self-destruct.

But here’s the problem: no matter how aflame MAGA World is, it is not big enough to win the election; and the more he indulges his id, the harder it will be to appeal to the rest of the electorate.

And at the moment, he appears remarkably tone-deaf.

It was one thing to vote for a the candidate who would “burn it all down,” but it’s very different to find that you are the one on fire, with the arsonist in chief eagerly passing the kerosene.

2. So, Some Things Do Matter After All

Really make sure to read Mona Charen in this morning’s Bulwark.

The party of Lincoln has assented to the pardon of Joe Arpaio. It found nothing much to say about the smearing of Mexicans as drug dealers and rapists. When the president said an Indiana-born judge could not be fair because his parents were from Mexico, one prominent Republican, Paul Ryan, called that “classic racism.”

He’s gone now. When the president told four darker-skinned members of Congress to “go back where you came from” (three were born here), the Republican party was mum.

The Republican party has been led, by stages, out on a very thin ledge. Most are not extremists or conspiracists or racists, but they look at their shoes and kick the dirt when those elements succeed in their party. They’ve allowed their conscience muscles to atrophy. Now the country is reevaluating questions of policing and race, finding previously elusive agreement on the need for reform, and exposing just how lost the Republican party has become.

Read the rest in the Bulwark.

… and it’s pretty weak stuff, which is painful because Victor Davis Hanson used to be a name to conjure with in conservative circles. These days he’s a full-time Trump apologist.

Jim Swift writes in today’s Bulwark that Hanson’s latest blast against James Mattis is “an invalid and hypocritical criticism wrapped in a history lesson, like a water chestnut is wrapped in bacon.”

Hanson’s third rule—that a retired general’s critique of a sitting president “should rest on clear factual evidence, not emotive anger or partisan disagreement,” isn’t really applicable in Mattis’s case. It’s true that Mattis didn’t assemble a fact-laden lawyerly brief against the president. But that’s because the facts of the proximate cause for his critique of Trump were already widely known: last week’s incident at Lafayette Square, which just about every national news outlet covered. And no fair reader of Mattis’s statement would detect in it either “anger” or “partisan disagreement.”

Which brings us, finally, to Hanson’s fourth rule, which holds that even an “inadvertent appearance” of “coordination” among retired officers should be avoided when criticizing the president. It’s not hard to understand Hanson’s rationale for suggesting this rule. But how is it supposed to work in practice? Must a retired officer with serious concerns about a sitting president send an email to every other retired officer in his address book to make sure nobody else is thinking of going public with concerns around the same time? Maybe Hanson wants retired generals to fire up Zoom for a group chat to prevent a glut of complaints? Or maybe Slack or a listserv? In fact, the only way in practice to ensure no appearance of coordination—to really ensure it—is to have the reality of coordination behind the scenes. That is the perverse unintended consequence of Hanson’s fourth suggested rule.

Read the rest in the Bulwark.

Ashley Feinberg writes in The Independent: “The Republicans who’d prefer Joe Biden are out in full force — and it looks like they might swing the election.”

But James Carville, the veteran Democratic strategist and a longtime observer of American presidential politics, said the groups’ impact on the 2020 race has so far been “significant,” and said Democrats could learn a thing or two from them when crafting their attacks on Trump.

“Democratic political culture is different from Republican political culture in that they don’t have all these endless meetings and go ‘let’s hear from 20 people’ [before putting out an attack ad],’” he said. “But these guys, they just go — they know how to pull a trick, and they’re motivated because if Trump wins, they have nowhere to go. If we lose an election and I’m a Democratic consultant, I’m still in good standing with the Democratic Party, but they don’t have a plan B because they’re playing to win.”

Asked why he thought his group’s ads were resonating with voters, Weaver had a different explanation: “There’s science and there’s art to politics, and the Democrats have become more science-based and less emotive-based. We’re very emotive, and in these days where there is so much information and disinformation… you have to use the power of emotion to cut through, and that’s entirely what we focus on.”…

“Obviously, you can’t coordinate with the never-Trumpers, but you’re aware that they’re running these negative spots… so that’s something that you don’t necessarily have to replicate every time. There’s so much that is going on with the anti-Trump groups that a good part of the Biden campaign negative ads has just been outsourced,” he said.

According to Carville, one way they’ve been so effective is by helping to drive down the number of voters who identify with the Republican Party.