Spoilers No More: The Decline and Decline of Third-Party Candidates

by Daniel McGraw
Theodore Roosevelt shown trying to get support for his nomination as a third party candidate in the presidential election, July 1912. The illustration appeared on the cover of Harper's Weekly. In August, Roosevelt was nominated by the Progressive Party, also known as the Bull Moose Party, as its candidate for president in the 1912 election. He lost to Democratic candidate Woodrow Wilson. (Photo by Stock Montage/Getty Images)
Share on Facebook Share on Twitter Share via email Print

After the 2016 presidential race, some post-election analysis showed the third-party candidates – Libertarian Gary Johnson and the Green Party Jill Stein — cut into Hillary Clinton’s base and helped Donald Trump win. Most of the analysis was based on the national popular vote–Johnson and Stein (and independent candidate Evan McMullin) garnered a total of about 6.7 million votes nationally.

That may seem like a lot. But as it always works out in the American electoral college voting system, it’s not how many votes, but where they are cast, in which states. As to what effect a third-party vote will likely have in 2020 – likely much smaller and important in just a few swing states — it seems that will favor Biden. Won’t be big, but could be influential.

That decrease in the third-party votes will likely be nationwide, but it is certain some states won’t be as affected as battleground states. The 2020 results from Ohio, Texas, Georgia and Iowa will not see much change because Trump’s victory in those states was too large and the third-party votes were too small a factor in 2016 to make much of a difference four years later. On the opposite side, a state like New Mexico, which had more than 10% of its electorate vote for Johnson and Stein, will likely be affected because Biden is far ahead of Trump in the polls.

On the surface, this is not all that complicated. Look at Florida. Johnson and Stein had a combined vote total of 270,026 in Florida, and Trump beat Clinton by about 119,770. Though third-party voting behaviors polls are usually smaller in the number surveyed and mostly national, an NBC News/Wall Street Journal poll released in late August has 47% of those who voted for Johnson or Stein switching to Biden, 20% to Trump, and 33 % would back another candidate or were undecided.

If you play those numbers out in Florida, it would mean that Biden would take 127,000 of the 2016 third-party voters, Trump getting 54,000, and 89,000 being undecided on them or staying with the Libertarians or Green Party.

It’s impossible to know if this will be a deciding factor in the election in a state like Florida. But it will be some sort of factor. The latest polls have Biden ahead in Florida by 2-3% and a swing of 73,000 votes in a state won by Trump by 119,770  in 2016 can be big. Especially when the polling and decision-making is taking place in the last eight weeks of a campaign. 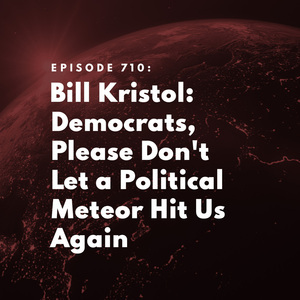 Podcast · October 21 2021
Bill Kristol: Democrats, Please Don't Let a Political Meteor Hit Us Again
Republicans have no agenda beyond denying the truth about 2020, and changing election rules. But if the Democrats can't ...

There is something else at play here, however, that is different from the historic context of third-parties in presidential elections. For most of the elections since 1900, the most influential third-party candidates came from their own personal popularity based on the hot issues of the times. Think of Socialist Eugene V. Debs and former President Theodore Roosevelt in 1912, Alabama’s George Wallace in 1968, and Dallas businessman Ross Perot in 1992 and 1996. All of those candidates received more than 10% of the popular vote on their own, while Johnson and Stein only got only 4.3% combined in 2016.

What the likely difference was is that Roosevelt and Wallace and Perot got most of their votes mostly because of their own popularity and far less due to a dislike of the opposition candidates. In 2016, a good percentage of the third-party votes came about because of dislike of both Trump and Clinton. The dislike was so prevalent that independent voters were choosing to support candidates for president who they knew couldn’t win.

This time it is different. “It’s a clear referendum election. Either you want to return Donald Trump to office, or you don’t,” said Patrick Murray, director of the Monmouth University Polling Institute, in a recent interview. “In 2016, there was so much uncertainty about both candidates, so much disagreement about whether one was any worse than the other, that a lot of people threw up their hands.”

There was little personal popularity for Johnson or Stein in 2016. But this time around, the candidates are even less known. Green Party candidate Howard Hawkins, a retired Teamster union worker, has been with the organization since its founding in the early 1980s, running for various offices 26 times without ever winning. Libertarian Party candidate Jo Jorgensen is a psychology professor who has little experience in running for office.

On the other hand, the candidates in 2016, were former New Mexico Governor Johnson and Stein, a physician specializing in internal medicine who ran for president for the Green Party in 2012. That’s one reason the numbers will be less this time around.

There are a number of other factors at play, but all indicate there will be less third party voters in 2020 than in 2016. The death of U.S. Supreme Court Justice Ruth Bader Ginsburg will likely push most voters into voting for either Biden or Trump, rather than voting for the Libertarian or Green Party candidate to make an ephemeral statement.

The bigger reason, perhaps, is that the like or dislike is definitely centered more on Trump and less on Biden. There seems to be little appetite for middle-ground undecided voters seeking out a third-party candidate as a protest vote. There is also far less serious organizing, and far less money being spent by both the Libertarian and Green Party in this environment. The Green Party is not on the ballot this time around in some important states. In the last week or so, courts in both Pennsylvania and Wisconsin knocked the Green Party off the ballot. Nor are they on the ballot in the influential swing states of Nevada and Arizona either.

The voting numbers show that Biden will have an advantage with the decline in third-party voting likely in some swing states. It looks like Florida and Arizona could see a larger Biden advantage. The “Blue Wall” states of Pennsylvania and Michigan and Wisconsin, could see some positives for Biden based on the result projections, but are more volatile. North Carolina is a “maybe.” Pennsylvania had close to 200,000 third-party votes in 2016, and Trump won by about 44,000. In Michigan it was 223,000 third-party votes and Trump winning by 11,000. In Wisconsin it is 137,000 and 23,000.

The recently released Great Lakes Poll– a survey of voters in Pennsylvania, Ohio, Michigan, and Wisconsin – asked the voters if they were voting for Libertarian or Green Party candidates in November. Those who said they would go third-party were much smaller compared to 2016. Libertarian Party candidate Gary Johnson took between 2.5% and 3.5% in the 2016 election in those states, while current Libertarian candidate Jo Jorgensen was listed as their voting preference by less than 2% in all four states.

What that means in that many crucial Midwest swing states voters who went third-party in 2016 will be “free agents” this time around. In the states of Michigan, Pennsylvania and Wisconsin – which Trump won by only about 77,000 combined votes in 2016 — roughly 425,000 voted Libertarian four years ago. The Great Lakes Poll results indicate that only about 191,000 will vote for that party in November. That means around 234,000 voters in those three states will likely be going with Trump or Biden this time around, about three times the number that Trump won by.

“I would say absolutely that the third-party voters from 2016 could have an effect,” Robert Alexander, professor of political science at Ohio Northern University told The Bulwark. “A number of polls in 2016 found that 13-15% were going into the last days of the election undecided or considering a third party. You just don’t see that this time around.”

Given this history of third-party candidate impact, and with the numbers as close and uncertain as they are, one might have expected the wild card entry of musician/entrepreneur Kanye West to make more of a difference. His candidacy, however, will have no importance on the outcome of the election in spite of his name recognition and the chaotic news cycles he briefly commanded.

There has been speculation that Trump pushed West to run, with the goal of siphoning off African-American voters in swing states like Michigan and Pennsylvania. West has acknowledged a meeting with Jared Kushner in August, Trump’s son-in-law and White House adviser. The involvement of numerous GOP-associated attorneys to help him get on the ballot in some states is not debatable.

This plotting and planning only went so far though as Mr. West faced the even greater challenge of a psychiatric condition.

What is important for those who thought Kanye West might have some meaningful voter number tweaking in November, will not happen because they didn’t get on the ballot in many states, and the ones he is on are mostly irrelevant.

West will only make it on the ballot in 12 states: Idaho, Minnesota, Tennessee, Iowa, Arkansas, Colorado, Oklahoma, Vermont, Mississippi, Louisiana, Utah, Kentucky. Of those states, nine of them voted for Trump in 2016 by large margins. The only state really in play on this Kanye West ballot list is Iowa, where Trump is up in the polls by about 2 points right now.

Mr. West and his foray into national politics join the long line of ill-fated third-party candidacies with little to show for their efforts. As the country heads to the polls and mails in ballots over the coming weeks, America will see whether or not the candidates challenging the two-party rule can make more than a marginal difference. 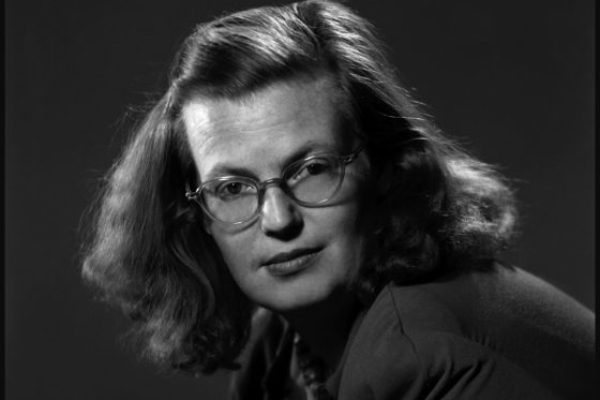 Shirley Jackson and the Unsettled Mystery of Life

Dispatch from the Republican Meme Wars 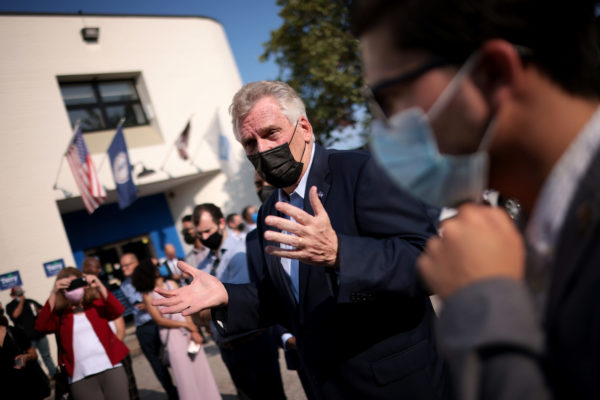 Why Is the Virginia Governor’s Race So Close?