Takeaways From One of the Biggest Polling Days of the Year

At the moment when he should be trying to expand his appeal to other groups in the electorate, Trump is trapped by his base in a mutual feedback loop that increasingly looks like a death spiral.
by Charlie Sykes
A woman marks down her vote on a ballot for the Democratic presidential primary election at a polling place in Armstrong Elementary School on Super Tuesday, March 3, 2020 in Herndon, Virginia. 1,357 Democratic delegates are at stake as voters cast their ballots in 14 states and American Samoa on what is known as Super Tuesday. (Photo by Samuel Corum/Getty Images)
Share on Facebook Share on Twitter Share via email Print

Joe Biden heads to Kenosha, Trump threatened to cut off funds for “anarchist jurisdictions” and encouraged his supporters to engage in voter fraud. Facebook says it will block political ads the week before the election, 881K more Americans filed jobless claims, 1,075 more Americans died of COVID-19, and you will be made to care about Nancy Pelosi and her hairstylist.

Welcome to the Daily Countdown. We have 60 days to go until the election; and then 78 days after that until Inauguration Day

I’m guessing we are going to be getting some tweets about this: 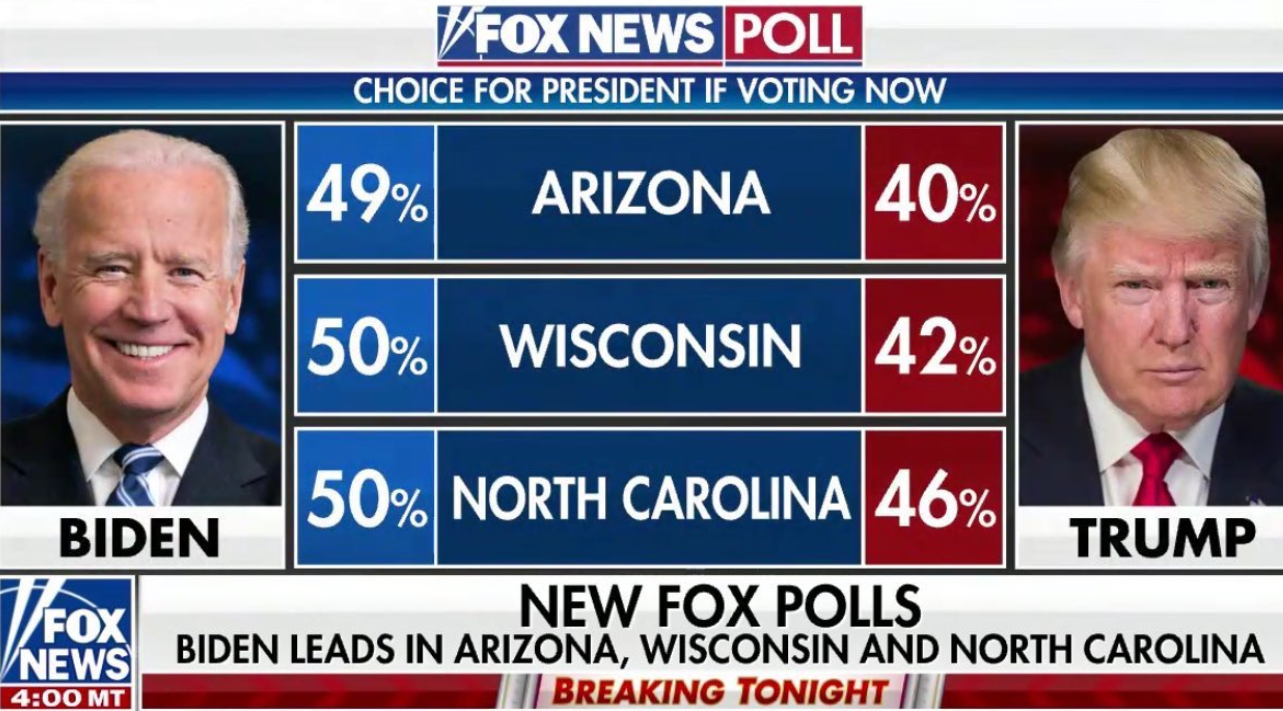 Actually, Wednesday was something of a poll-apalooza, probably the biggest polling days of the year…so far.  The Biden camp got a scare from a new Monmouth poll showing a much smaller lead in Pennsylvania, but most of the rest of the polls show (1) Biden with a solid national lead, (2) a fleeting or nonexistent convention bounce, and (3) evidence that Trump’s strategy isn’t working, at least for the moment.

But, but, but, you say, those are meaningless national polls. The only polls that matter are the numbers from the battleground states. This is true, but here is a handy way to think about those national numbers and the Electoral College. 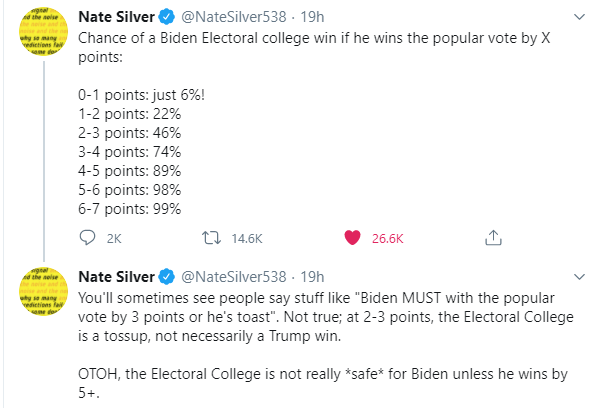 Here are some interesting details from the polls. CNN’s pollster asked voters whom they thought would “keep America safe from harm.” The result:  Biden 51% (+6) Trump 45%.

The same poll asked which candidate would “unite the country and not divide it”?  Biden 56% Trump 36%—a 20 point gap.

Even the Fox poll shows that Trump is having trouble getting traction with his law-and-order pitch. “In Arizona and Wisconsin, voters said they preferred Mr. Biden over Mr. Trump to handle the issues of policing and criminal justice by a five-point margin; in North Carolina, voters were basically split down the middle on that.”

Here’s a piece of campaign literature that showed up in my mailbox here in Wisconsin. Apparently, Team Trump is sending these out in all of the battleground states. 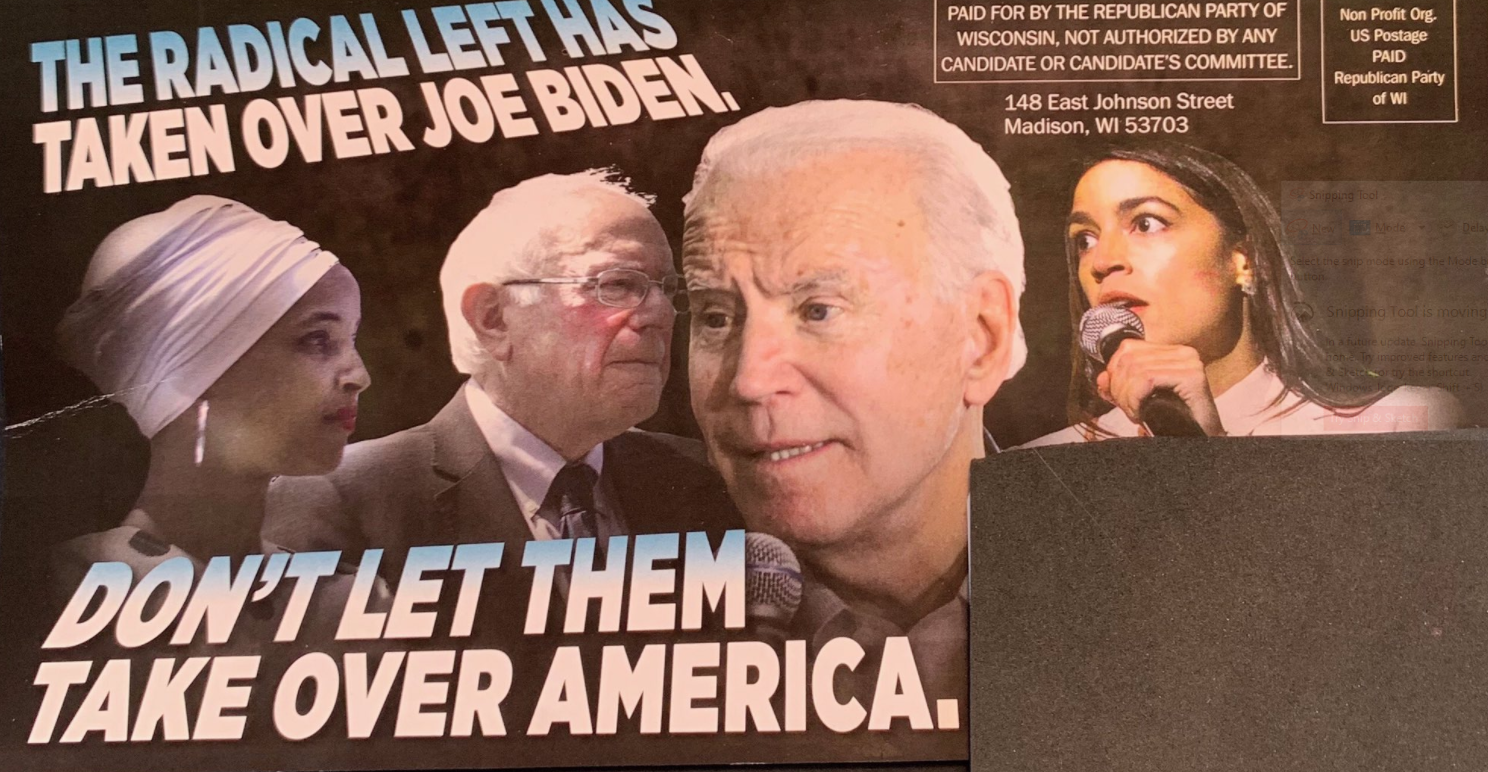 A Muslim, a Jew and an Hispanic woman walk into a bar…. No points for subtlety here.

It’s eye-rollingly awful, but this is exactly what Trump’s base wants. And that is a problem for Trump. At the moment when he should be trying to expand his appeal to other groups in the electorate, Trump is trapped by his base in a mutual feedback loop that increasingly looks like a death spiral.

I’m old enough to remember when conservatives pretended to care about this sort of thing.

The president suggested that his supporters vote twice, which is illegal.

Another thousand Americans died of the coronavirus yesterday. It’s less than a week since Trump turned the White House into a convention prop, and he continues to encourage right wing vigilantism.

But the BIG story on Facebook right how is…

Meanwhile, Trump appears intent on rushing a vaccine to be approved before the election.