With Putin’s recent moves, we’ve reached what may be the most critical inflection point in the war.
by Giselle Donnelly
A Ukrainian serviceman sits on a tank on the road near recently released Dolina village, Donetsk region on September 22, 2022. (Photo by Anatolii Stepanov / AFP) (Photo by ANATOLII STEPANOV/AFP via Getty Images)
Share on Facebook Share on Twitter Share via email Print

With his delayed and cursory announcement of a “partial” further mobilization of Russian military forces, Vladimir Putin has made several things plain—and inadvertently also made plain what an effective response should be. It is not hyperbole to observe that Putin has opened a window for a decisive Ukrainian victory, if President Joe Biden will only climb through it.

The big headline from Putin’s speech is that he has issued an executive order drafting an additional 300,000 troops, about twice the estimated size of the invasion force this past February. He also laid out plans for annexing territories held in Ukraine to Russia and again rattled his nuclear saber: “I want to remind [you] . . . that our country also has various means of destruction. . . . [W]hen the territorial integrity of our country is threatened, to protect Russia and our people, we will certainly use all the means at our disposal,” Putin declared. Then, turning to the camera with his best cold-fish, Bond-villain look, “This is not a bluff.”

But the real threat is that Putin is willing to shed more oceans of Russian blood—estimates of Russian casualties to date exceed 50,000—in pursuit of his goals in Ukraine. And indeed, there are indications that this is merely the first tranche of reservist call-ups; reports from outlying Russian provinces, which have provided the bulk of the troops fed into the Ukrainian meat-grinder, suggest that steps are being taken to add up to 1 million “recruits.”

Perhaps the best evidence of Putin’s larger intent is the reaction of draft-eligible Russians, some of whom have fled to Finland—reportedly causing Finland’s government to consider stopping traffic across the border—and Serbia—to which all flights were quickly booked. Some of those who can’t get out took to the streets in Moscow, St. Petersburg, and dozens of other cities. In sum, Russian nationals, heretofore exempted from the war’s burdens, are starting to panic. “Until recently,” longtime Russian political analyst Dmitry Oreshkin told the Associated Press, Russians participated in the war “with pleasure, sitting on their couches, [watching] TV. And now the war has come into their home.” He added: “People will evade this mobilization in every possible way, bribe their way out of this mobilization, leave the country.”

Thus the Putin regime’s cynical mix of brutality and incompetence is clearer than ever. A great many of those caught in this call-up are very likely receiving a death sentence. The training, equipment, planning, and leadership of the Russian army have been disastrous since the start of the war. Soldier morale, never high, has plummeted. Newly formed units will be still worse in every way—and the Russians know this. The Russian Duma rammed through legislation threatening heavy prison terms—up to 15 years under some circumstances—for those who refuse to serve or voluntarily surrender on the battlefield. These are not the actions of a leader certain of his own people.

Nor can Putin provide substantial new combat power in a timely way. Russian troops lack the most basic equipment, from proper uniforms, helmets, and body armor to rifles and radios. They are now issuing T-62 tanks—first fielded in 1961—and similar vintage infantry vehicles. There is but one small central training center, and the traditional Russian modus operandi—basic training within the home unit—is a recipe by which the blind teach the blind.

In combination with the recent and smashing Ukrainian counteroffensives, Putin’s risky and relatively weak moves add up to an inflection point in the war—perhaps the most critical moment to date. Putin has been knocked down; now is the time to knock him out of Ukraine.

The needs of Ukraine’s military are well known. The first priority is for wide-area air and missile defenses; the only even marginally effective weapon in Russia’s conventional arsenal is the long-range missiles being employed against Ukrainian cities. These are few in number, and—as has been the historical record with terror-bombing campaigns—have only hardened Ukrainian resolve. Defenses against such weapons are near to hand, easy to emplace, and relatively plentiful—as indicated by the bubble around the supply and assembly areas in eastern Poland, where Western armaments are transferred. This is the first step in the “taking back the skies” that Ukrainian President Volodymyr Zelensky emphasizes.

The second and related step is to provide Ukraine fighter jets with the capability to broadly suppress Russian local air defenses over the battlefield and to render null the rump of the Russian air force, thus clearing the way for more vulnerable Ukrainian reconnaissance and strike unmanned aircraft. Longer-range rocket artillery—the Army Tactical Missile System—would speed the Ukrainians’ ability to retake Crimea, one of the toughest challenges remaining to Kyiv but also the sine qua non of its victory.

It’s also time to give the Ukrainian army the qualitative advantage in direct combat that Western artillery has provided in indirect fires. This means late-model Western tanks—either the German Leopard or, preferably, American M1s like those the Poles are buying—and fighting vehicles.

Finally, it’s critically important to expand the Ukrainian training system. Since the initial Russian invasion in 2014, the Ukrainians have created what the Russians could not: an increasingly professional officer and noncommissioned officer corps. This is the most important qualitative advantage enjoyed by Ukrainian forces and it is now on full display, but the scope of Ukrainian counteroffensives is draining its training cadre.

Accelerating the pace and prospects for a decisive Ukrainian victory would be not only smart strategy but an act of mercy—mostly for Ukrainians, who deserve it, but also for Russians who do not. One may have sympathy for the draftees from impoverished, non-Slavic regions of Russia who provide Putin’s cannon fodder, but these are also the ones committing the barbarities and war crimes that have so marked the war.

One cannot say it too often: The Biden administration holds the key to making this war shorter, less destructive, and less bloody than it already is. The war cannot end—nor a just peace begin—without a Ukrainian victory that secures all of its sovereign territory. We can see this victory just outside the window now. 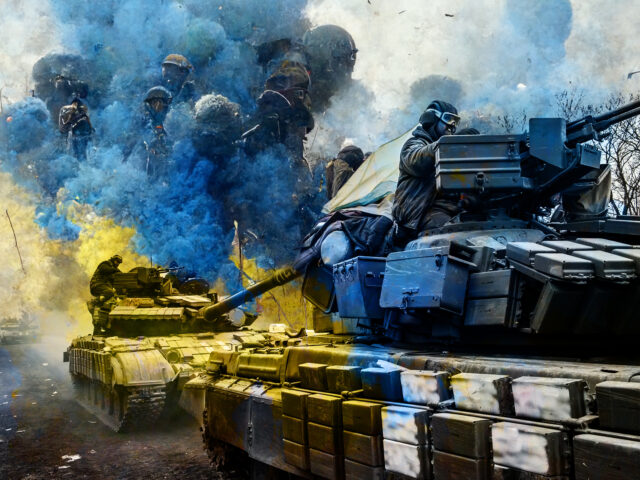