The Fabelmans has been sold to audiences as A Movie About Movies, or perhaps A Movie About The Magic Of Movies. The trailer features Mitzi Fabelman (Michelle Williams) telling her son, Sammy (Mateo Zoryan as a younger child; Gabriel LaBelle as a young adult), “movies are dreams . . . that you never forget.” Her voice is tremulous; she is down on one knee handing the young boy a camera.

The best sequence in the film comes as Sammy is splicing together footage from a family camping trip. He resents the task that his father, Burt (Paul Dano), has given him, because it is going to take him away from what he really wants to do: make an exciting war movie with his friends. But he sets to the task and as he’s putting the pieces together, he notices a recurring pattern in the background: Mitzi and family friend Bennie (Seth Rogen). Happy. Laughing. Trading hats.

When the dots connect, Sammy scrambles from the table. Frightened by what he’s pieced together. Resentful of the knowledge he’s forced to hold, secret, from the rest of the family. The whole thing is masterful; it’s like the showcase set pieces of Blow-Up or Blow Out, if Antonioni or De Palma had decided to depict the murder of a marriage rather than a shadowy assassination.

Burt is a technician (a computer scientist, to be precise), Mitzi is an artist (a pianist forced to give up her career after the kids were born), and Sammy is the synthesis of the two: the avatar of the man who is almost inarguably the greatest natural technician American cinema has ever known and also, perhaps more arguably, the single most important American visual artist of the final quarter of the American Century. The Fabelmans is, perhaps, a little self-indulgent, a trifle masturbatory. But it’s still of interest because it is the singular American artist’s effort, using the medium he has mastered, to help us understand what makes him tick. And, maybe, to help himself understand the same.

As much as I admire individual sequences of the film—Judd Hirsch’s magnificent speech about the tension between art and family and love; Sammy prompting a meatheaded actor into an existential crisis on the set of his war movie; director David Lynch’s walk-off performance as one of the all-time great helmers—the whole thing feels kind of soggy at nearly two and a half hours.

And yet, the sogginess itself almost feels like a cinematic representation of memory, a way to highlight the moments that matter while the connective tissue of life falls away. 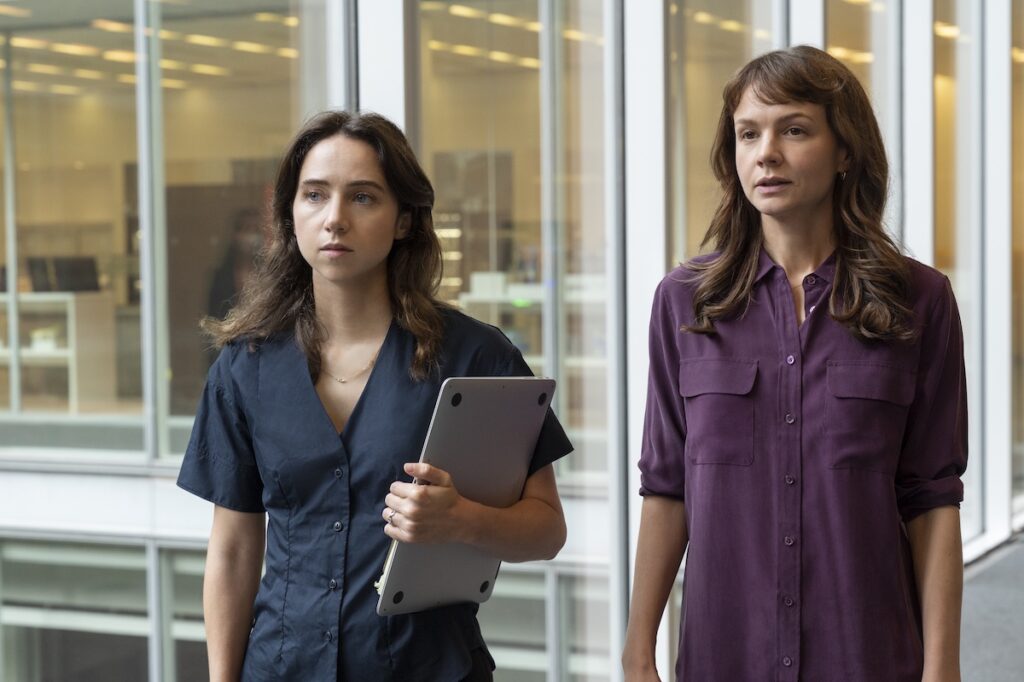 I mentioned this on Across the Movie Aisle this week, but it feels worth reiterating in written form: She Said has a real problem in that it is a drama-free drama.

One issue is that successful investigative journalism is actually quite boring: When publishers, editors, writers, and sources alike are all in agreement about the importance of a story and the need to see it published, what you’re left with is a series of phone calls and meetings and then the writing, always the writing.

Look at the movies about journalism that do maintain your interest and you’ll see that what makes them fascinating is that they’re less journalism stories than journalism-obstruction stories. The Insider, for instance, keeps you glued to the screen because it’s actually a story about corporate malfeasance and efforts to placate sponsors by burying a whistleblower’s testimony. Shattered Glass is about the efforts to uncover a fabulist’s nonsense. All the President’s Men is intriguing, at least in part, because they heroes actually botch the story they’re working on at the end of the film. The Post is less a journalism movie than a corporate/legal thriller. The reporting team in Spotlight is up against not only a powerful  institution bent on keeping its failings secret but also a community that would rather not look squarely at the ugly truth.

But She Said has none of that, really. Aside from Harvey Weinstein (here played by Mike Houston), everyone’s on board with what they’re doing. The movie doesn’t even delve into the various ways in which Weinstein himself perverted journalism—handing out lucrative book deals and magazine gigs to potentially adversarial writers—which could have at least possibly highlighted the difficulty of the work done by Twohey and Kantor.

All of which is to say that this was, perhaps, the wrong book about the saga to turn into a movie. Ronan Farrow’s accounting of his effort to uncover Weinstein’s monstrousness, Catch and Kill, has all the hallmarks of a good journalism movie: corporations working to undercut him; executives in the pocket of Weinstein; a literal spy thriller in the form of Israeli intelligence agents sent to keep tabs on Farrow and his sources.

The performances in She Said are all top-flight; Kazan and Mulligan are excellent, and Mulligan’s faux-buddy-buddy bit with Peter Friedman, who plays noted Washington bag man Lanny Davis, is just a pitch-perfect depiction of source massaging. It’s just too bad the story behind the story is so lacking in drama. 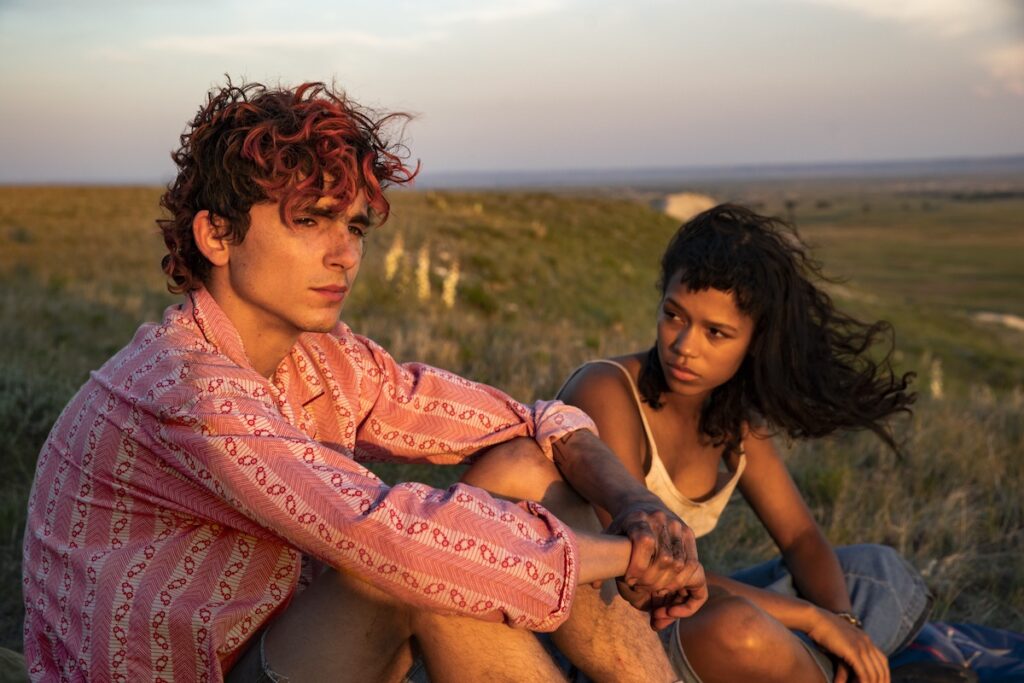 Bones and All has what I’ve come to think of as the True Blood Problem.

HBO’s absurd (and absurdly popular) vampire melodrama was intended as a parable of sorts for the gay experience in America: Vampires were “coming out of the coffin” in order to take part in proper American society, their struggle for acceptance opposed by close-minded preachers and pols and the such. Fairly straightforward stuff.

Except, of course, that the vampires on the show were almost uniformly terrifying monsters—literally bloodthirsty, being, y’know, vampires—in addition to being unrepentantly debauched (this was HBO, after all, so vampire sex in all its configurations was prominently featured). Which in turn meant that the parable that creator Alan Ball was going for here was, well, fraught. To put it mildly.

Bones and All posits a hidden world of vampire-like cannibals who are compelled to consume human flesh, who can sense one another, who have to stay hidden from the world in order not to run afoul of humanity’s wrath. Maren (Taylor Russell) is forced to go on the run sometime in the 1980s after eating one of her classmate’s fingers at a sleepover; Maren’s father (André Holland) abandons her, afraid of—and for—her. As she crisscrosses America’s Midwest, Maren hopes to learn more about what she is and what she has to do, first coming into contact with the creepy Sully (Mark Rylance) and then the dreamy Lee (Timothée Chalamet) and the tenuous nature that accompanies living on the outskirts of society.

Director Luca Guadagnino is making a point here about life on the margins. The cannibals-as-LGBT-outcasts-in-Reagan’s-America isn’t even really subtext; it’s right on the surface. Lee’s sister says he looks gay in the shirts he chooses to wear; Lee at one point seduces a man in order to kill and feed on him. The youngsters wrestle with questions of suicide and self-harm while avoiding normal folks as much as possible. But herein lies the True Blood Problem: If you are in fact a cannibal whose compulsions make you kill for sustenance, then you probably should be separated from society. It would be wise to cast such individuals out.

Setting aside the, ah, trickiness of the film’s central metaphor, it is, all told, a fine movie. I’m always up for a good ramble through the heartland, and Guadagnino makes good use of the American countryside, hills and trees and golden light flying by the cars and buses streaming along its endless stretches of highways and byways. Bones and All has at its heart very nice performances by Russell and Chalamet—there’s almost a YA sappiness to its earnest awkwardness, and Russell gives off early Natalie Portman vibes in a standout role—and a wonderfully creepy supporting turn by Michael Stuhlbarg as a hillbilly cannibal.

The one false note is Rylance’s Sully, who is less a character than a grab bag of tics (deep nasal breaths accompanying a sucking of teeth alongside a mumbling delivery) attached to a cardboard cutout of an archetype we now refer to as an “incel.”