‘Death on the Nile’ Review

The opening moments of Death on the Nile take place in black and white and are set in and around the trenches of World War I. As the camera tracks through no man’s land and into the deadly ditches (and a CGI bird flies by from behind the frame, for some reason), we settle on a face. It’s a familiarly hirsute face, a bushy mustache that calls to mind that of Hercule Poirot as played by Kenneth Branagh. Yet this is not Branagh. But this is many years ago, so perhaps it is just a younger Poirot.

Alas, no, this is not Poirot. It is Poirot’s commanding officer. Poirot is played by Branagh (who appears to have been given the now-customary and still-discomfiting CGI de-aging procedure) and during this sequence we learn why it is he adopted the famous facial hair—to whom it is in tribute; what it is hiding—and the whole thing is a bit weird in that it centers Poirot, rather than the murder-mystery, as the film’s raison d’être.

A movie needs a protagonist and Poirot need not be a cipher—indeed, the fussiness and self-centeredness with which Branagh plays Poirot is at least part of the charm. As a character sniffs at one point, she’s never heard anyone say their own name as often or as lovingly as Hercule Poirot. But one can be forgiven for questioning what Poirot’s WWI backstory really adds to our enjoyment of the picture.

And this is a picture that is built on enjoyment. Enjoyment of Branagh’s scenery chewing; enjoyment of watching beautiful people like Gal Gadot and Armie Hammer dance dirty while dressed in lavish evening wear; enjoyment of seeing our greatest taboo, murder, being broken so we can voyeuristically peer through our window on the effort to solve the crime in question.

Death on the Nile is, like Branagh’s 2017 film Murder on the Orient Express, adapted from one of Agatha Christie’s Poirot novels. The plot is straightforward: Poirot joins newlyweds Simon Doyle (Hammer) and the fabulously wealthy Linnet Ridgeway (Gadot) on a Nile cruise as they attempt to flee Simon’s jilted lover, Jacqueline de Bellefort (Emma Mackey), who is obsessed with ruining their honeymoon. Joining the happy couple and the unhappy detective attempting to keep an eye on the proceedings is a colorful cast of characters—played by Annette Bening, Letitia Wright, Russell Brand, and Rose Leslie, among others—all of them suspicious in their own right, all of them suspects after someone dies.

And then someone else dies.

And then a third person dies after that.

So many deaths! So many tears in the fabric of society. So many chances for Poirot to look morose as he contemplates not only the thin and weary nature of our souls but also man’s inhumanity to his fellow et cetera. 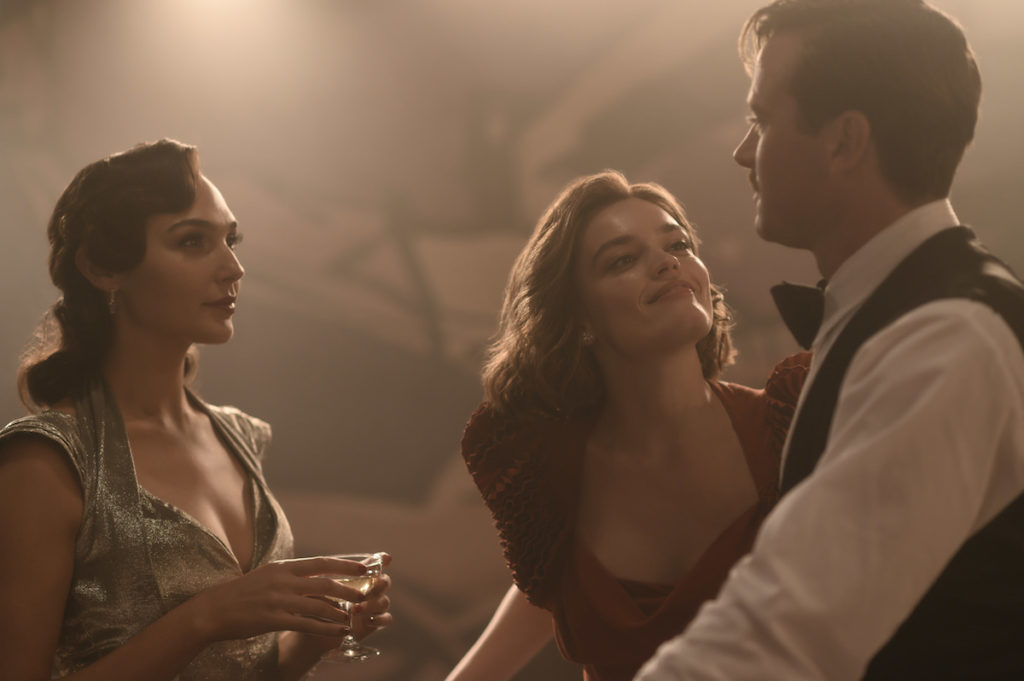 I don’t mean to come off as dismissive here because I actually quite enjoy Branagh’s work in this movie and its predecessor; Orient Express, in particular, does a fantastic job of dealing with the weightiness that accompanies murder in a way that the source novel, frankly, does not. Christie’s novel is weirdly … snide. Or perhaps unserious is a better word. Branagh treats murder with gravity rather than as a game—even if part of the fun, naturally, is solving whodunit (three times) on the River Nile.

My biggest complaint about Death on the Nile is the look of the thing. Interior shots are all fine and dandy, occasionally even smoky and handsome, but anytime the titular river—or, really, any outdoor location—comes into view there’s an obvious and glaring greenscreen effect that gives lie to the whole proceedings. It heightens the artificiality in a way that unfortunately emphasizes the clockwork nature of the murder plot.

A quick example: At one point, the jilted Jacqueline enters the frame wearing a striking red dress, the sort of outfit that screams devilry is afoot. Her face smolders; she slinks forward; a cunning smirk and slit eyes target her prey. It’s a striking image but its power is completely undercut by the fact that the light behind her is just the wrong color, the shading is off, the interacting shadows and penumbra just slightly wrong. I understand that the studio cannot build a working version of the Karnak and plop it onto the Nile to paddle idly along, but the background work in this picture is distracting throughout.

Still, I quite enjoyed Death on the Nile, and most of the credit has to go to the cast. Branagh’s hammy performance never fails to bring a smile to my face. Gadot was done no favors by the trailer’s emphasis on her “enough champagne … to fill the Nile!” line read; Twitter wasn’t wrong to mock it, but she’s excellent in this movie as the clueless and casually cruel heiress who also happens to be stunningly beautiful. Hammer’s greatest strength has always been “generic-but-exceptionally-attractive leading man prone to flashes of anger,” and he leans into that here.

Perhaps I’m simply at the point in my life where my enjoyment of watching attractive people on a giant screen trumps everything else. Whatever the reason, I look forward to the continuing adventures of Hercule Poirot and his Magic, Tragic Mustache.