The world has missed Adrian Lyne, the British director of erotically charged cinema like Fatal Attraction, Indecent Proposal, and 9½ Weeks. Absent from the big screen since 2002’s Unfaithful, Lyne is a throwback to an earlier, better age, one in which he and Paul Verhoeven (Basic Instinct, Showgirls) were the kings of movies for adults that nudged up to the line of being adult movies. Before the billion-dollar tentpole—and attracting the audience of teenage boys in America, China, and elsewhere needed to secure that bounty—became the be-all, end-all of studio moviemaking, guys like Lyne and Verhoeven repelled moralists and attracted audiences, their films performing a strange cinematic magnetism.

The world has also moved on from Lyne and Verhoeven’s tastes. Fatal Attraction (1987), Basic Instinct (1992), and Indecent Proposal (1993) were all massive hits, each landing in the top ten of their respective years. In the last decade or so, the only movies I can think of that made the domestic top ten and were rated R for sex or nudity were Deadpool and The Hangover Part II: not exactly movies for adults, even with the Restricted tag from the MPA.

Lyne’s Deep Water is a real throwback. It has big stars (Ben Affleck and Ana de Armas). It is unapologetically sexy and sexual, with all the uncomfortable hangups such material brings to the fore. It is violent, and in a more visceral, bloody way than the CGI violence of recent years in our big budget spectacles has permitted.

And it is going straight to Hulu. Because God forbid something with a little fire in its belly sully our big screens.

Affleck stars as Vic Van Allen, who made a fortune on microchips for military drones and was able to retire to the bayous of Louisiana as a result. What his wife, Melinda (de Armas), sees in him is less clear, since by film’s beginning she’s so brazenly cheating on him that friends, male and female alike, are pulling him aside and telling him that Melinda’s shenanigans are making them all uncomfortable. Her latest conquest is Joel (Brendan Miller), who plays his part a bit like Brad Pitt crossed with Cro-Magnon man, all furrowed brows and flowing locks.

Vic scares off Joel by asking him if he knows that Melinda’s previous “friend” disappeared. Because, Vic tells Joel, Vic killed him.

Haha, just kidding! But maybe not? But definitely, seriously, just joking. Except, you know, who can say? Joel takes the hint. Melinda’s successive suitors, well, they’re not so lucky. 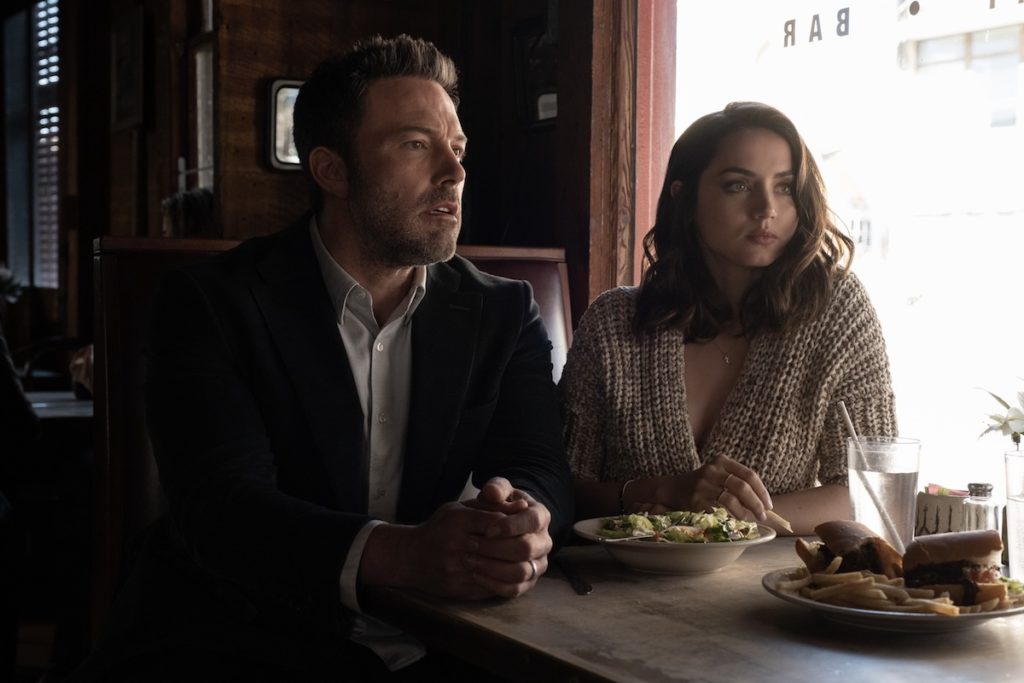 It also looks weirdly cheap in places. The lighting, for starters, has a very basic quality to it; there’s little play with smoke or shadows, everything’s too bright. I find it hard to believe that this is made by the same guy who directed Flashdance and Jacob’s Ladder, two films that understood just how to sell sexy smokiness. They were literally steamy films; Deep Water just feels kind of flat, overlit. On top of that, the rear-projection or whatever was being used to simulate motion in driven cars was just exceptionally poorly done, jittery and shuddery with a distinctly computer-generated feeling of weightlessness.

All that aside, I was smitten. De Armas was practically designed in a lab to make movies like this: she’s just pure, smoldering temptation, careening into open arms wherever she finds them. It is almost painful to watch her bounce off the nearly asexual Vic; no wonder their bedroom life cascades into a terrifying game of murder and misery.

And Lyne’s film drifts through a fascinating ideological undercurrent throughout, the way Vic’s progressive desire to let his wife make her own decisions butts up against the regressive need to defend their relationship’s existence to ensure for the benefit of their daughter, Trixie (Grace Jenkins), that they don’t split up. But there’s more at work here than maintaining an intact family unit for appearance’s sake: Vic wants what’s his and doesn’t want anyone else to have it, despite his proclamations to the contrary. That friction between what we say we want and what we actually want ensures real sparks are thrown off by what might otherwise be a mildly ludicrous premise.

Speaking of Trixie: make sure you stick around a bit through the credits. I get the sense that Lyne is not-so-subtly suggesting the girl deserves some share of the murderous burden this family bears. Kids: they’ll drive you nuts, man.