Democrats Are Now the Party of American Leadership in the World

When I was growing up in the 2000s, the Republican party was associated with a muscular foreign policy—what George W. Bush in his second inaugural address dubbed “the concerted effort of free nations to promote democracy.” Democrats, on the other hand, tended to put more faith in diplomacy and international organizations, believing that soft power was more effective.

For two or three generations—since Eugene McCarthy’s challenge in 1968, probably—these views of foreign affairs were a more or less consistent cleavage between the parties. The Taftian isolationism that had long ago been a major strain of GOP thought had never entirely disappeared, but it had shrunk considerably, and post-Reagan, post-Gulf War, post-9/11 Republicans tended to believe that the United States should use its power to preserve the liberal global order and to protect democracies. Post-9/11 Democrats, more skeptical about how American power could be used effectively and morally, tended to prefer what one Obama adviser called “leading from behind.”

How things have changed.

Two focus groups I recently observed with Republicans and Democrats from Texas suggested the ways in which the parties have been undergoing a realignment on foreign policy.

Here are some statements from members of the two groups. Try to guess which is the Republican group and which is the Democratic group.

Here’s the first Texas group, where six of the ten participants were in favor of sending American troops to Ukraine.

Moderator: What would the situation there need to look like for everybody, personally, to feel comfortable or want to send troops over? Nobody’s brought that up.

Texas Voter 1: I would have already.

And here’s the other Texas group, where only three of nine were in favor of sending troops to Ukraine:

Texas Voter 6: I was just gonna say, I think we should support Ukraine with troops, temporarily. And I emphasize that word “temporarily” because I think we have to call Putin’s bluff. I think it’s a bluff myself.

At this point I’m sure you can guess the trick: The hawkish first group was made up of Democrats, and the more dovish second group was the Republicans.

These trends have been developing for a while. A Pew analysis from 2019 showed a steady reversal in what had been the dominant Republican and Democratic attitudes on foreign policy: 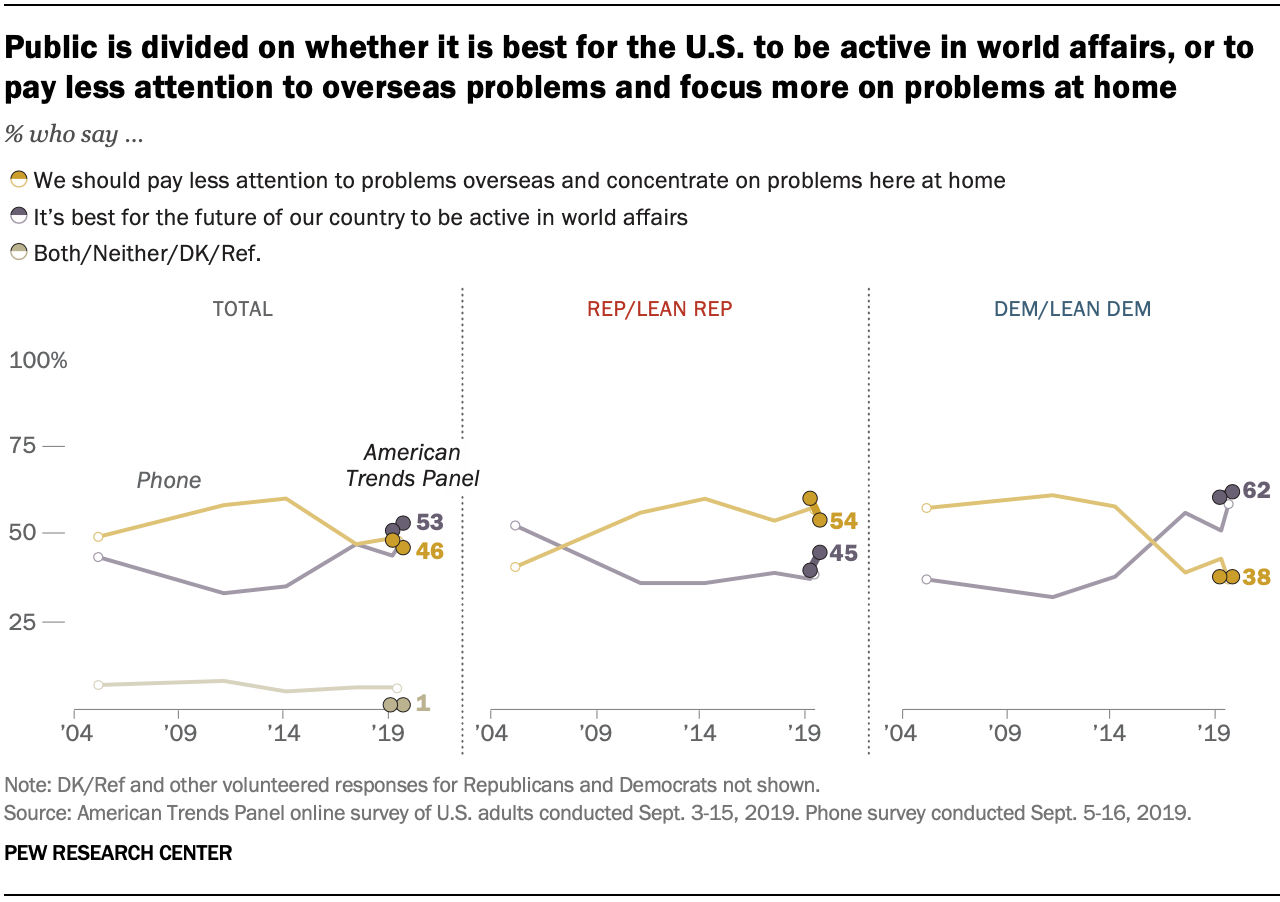 Today, the Republican party’s leader calls Vladimir Putin a “genius” and whitewashes his carnage in Ukraine as “the strongest peace force I’ve ever seen.” Meanwhile, the Democratic party is led by a president who, unlike his predecessor, did not hesitate to call Putin a “killer” and helped assemble the free world to enact crippling sanctions on the Russian economy.

But the strangest change from the politics of the 2000s is that prominent Republicans and conservatives—major figures in the pro-Trump right—have turned out to be actively pro-Putin. From Tucker Carlson becoming a Kremlin propaganda fixture to Candace Owens regurgitating Putin’s propaganda about Ukrainian history to Madison Cawthorn suggesting that Volodymyr Zelensky is a “thug,” the rhetoric of the right has clearly shifted away from support for a foreign policy explicitly promoting human dignity in the face of an authoritarian Russian regime.

But to what extent are the views of those conservative elites also held by rank-and-file Republicans? Let’s turn to the data.

In an AP-NORC poll conducted in mid-February—that is, just prior to the invasion of Ukraine—22 percent of Republican respondents thought the United States should play a “major role” in the Ukraine conflict. For Democrats, the number was 32 percent. 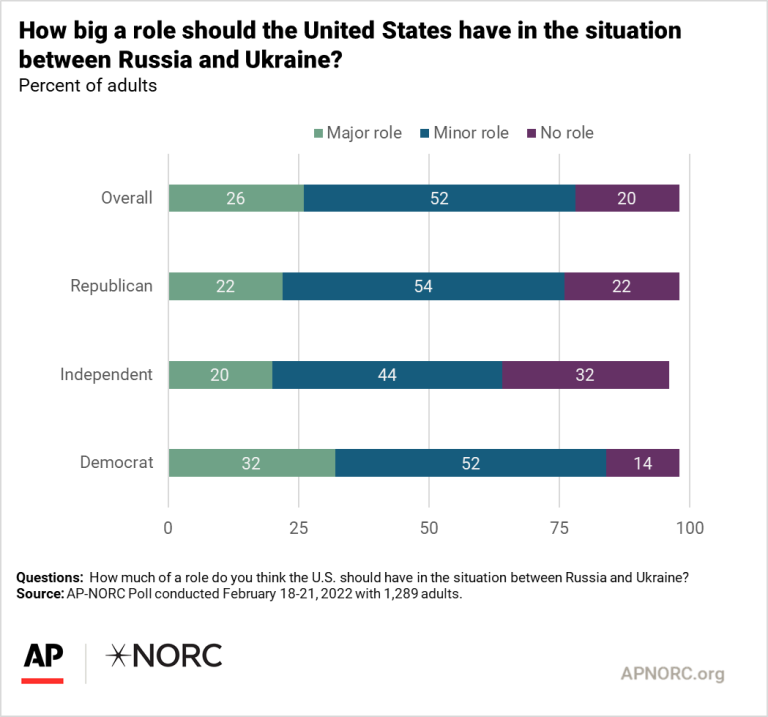 A post-invasion Navigator survey of registered voters conducted from March 3 to March 7 found that Democrats were more supportive than Republicans of sanctions on Russia and of sending Ukraine “military aid including arms and air support”:

A Pew poll conducted last week appears to suggest that Republicans may be returning to their post-9/11 outlook, finding that 49 percent of Republican respondents believed the United States was not providing enough support to Ukraine, compared to Democrats who felt the same at 38 percent: 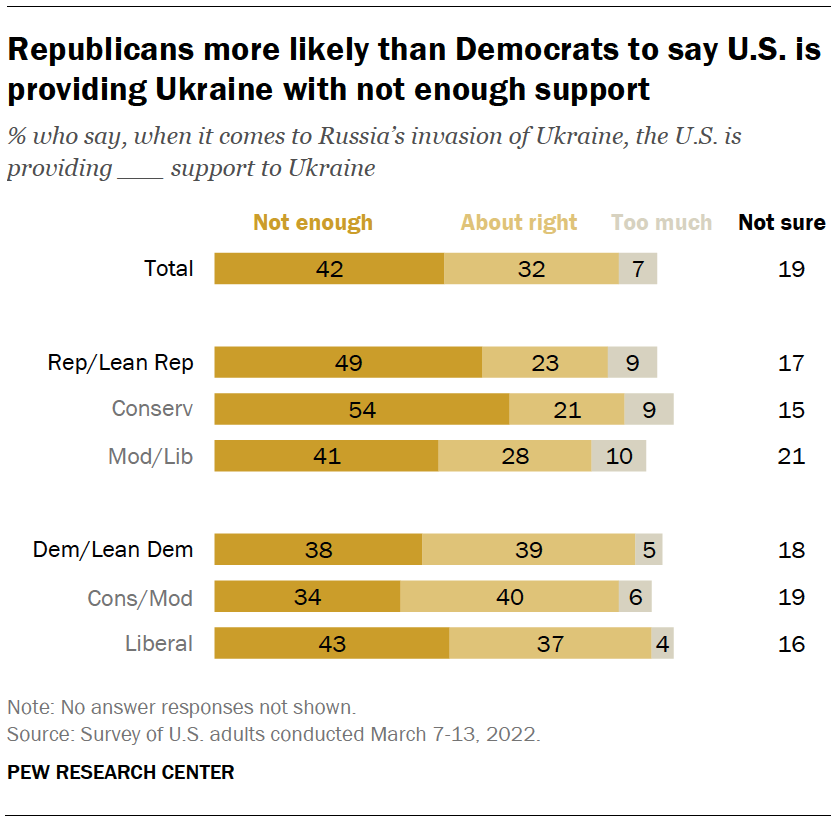 To some extent, Republican views of U.S. policy toward Ukraine must be understood through a partisan lens rather than an ideological one. The Pew poll found that 67 percent of all Republicans, including 74 percent of all conservative Republicans, disapproved of the Biden administration’s response, compared to 17 percent among Democrats. Which raises the question of what, then,  Republicans are in favor of doing that the Biden administration is not already doing?

Not sending troops. In a Monmouth University poll conducted from March 10 to March 14, 78 percent of Democrats say they are in favor of “sending troops to support our European allies as a deterrent to keep Russia from invading those countries,” compared to 65 percent of Republicans. This backs up a striking finding from the Navigator poll: Democrats had a much more favorable view of NATO than Republicans, by 50 to 24. The Pew poll, too, found more Democrats than Republicans favoring a large U.S. military presence in NATO countries neighboring Ukraine.

As far as sending troops to fight specifically in Ukraine, the Monmouth poll showed Democrats almost evenly split, with 46 percent in support and 49 percent opposed. But among Republicans, only 37 percent say they support deploying troops to Ukraine, while 62 percent are against.

Imagine going back in time to 2003 and telling Dick Cheney or Trent Lott that in about twenty years, more Democrats than Republicans would want to deploy U.S. troops abroad in response to a major foreign crisis. They’d think you were crazy.

Some of this shift can be chalked up to the partisanship surrounding Russia that went along with the Trump era. But there are deeper forces at work, too, having to do with the aftermath of the 9/11 era, the wars in Afghanistan and Iraq, and the changing nature of our political coalitions.

Because of those forces—and because of how Donald Trump remade the GOP—Republican voters abandoned their longstanding commitments to free trade, small government, public morality, and the rule of law.

The crisis in Ukraine can be seen as a test of how entirely Republicans have abandoned muscular foreign policy as well.

Robert Rosamelia is a researcher and writer in Washington, D.C.

How Big Is the Red Wave Going To Be?

Fear and Loathing in Dane County