‘Everything Everywhere All at Once’ Review

Everything Everywhere All at Once is simultaneously supremely silly and profoundly moving, a film that hides its earnestness under multiple layers of jokes without dipping into deadening ironic detachment. Plus: there’s kung fu and talking rocks and an everything bagel that really has everything and looks a little like a black hole.

Evelyn Wang (Michelle Yeoh) can’t quite see that she’s on the verge of losing it all. Her laundromat to the taxwoman, Deirdre (Jamie Lee Curtis). Her husband, Waymond (Ke Huy Quan), to divorce. Her daughter, Joy (Stephanie Hsu), to the world. And the world—all the worlds, every one of them in the multiverse—to Jobu Tupaki (also Hsu), a malevolent force of chaotic energy that gained access to everything, everywhere, all at once, and went mad as a result, trying to track down and kill every Evelyn in every corner of the multiverse.

Dan Kwan and Daniel Scheinert (the co-writers and co-directors who are known, collectively, as “Daniels”) conceive of the multiverse as a way to instantly download skills needed to fight Jobu Tupaki. With the aid of a Bluetooth headset and the re-creation of a memory that comes from something unique to happen in each multiverse that sent each iteration of a person down wildly divergent paths—something as silly as eating a tube of lip gloss or as horrifying as accidentally blinding yourself as a child by breaking a fall onto a pair of sticks with your eyeballs—Evelyn can learn kung fu or become an amazing singer or learn how to use her feet to perform everyday tasks just as she’d need to if an evolutionary quirk left people with hot dogs for fingers. It’s kind of like the training programs from The Matrix, just with the multiverse instead of an AI construct.

I have streamlined this as much as possible because the actual mechanics don’t matter that much and would probably drive you mad if you thought about them logically for too long. Suffice to say that the effect is comic, that the multiverses are amusingly divergent, and that Evelyn has a guide in this adventure in the form of her husband from the so-called alphaverse, the first point in the multiverse to discover the multiverse and figure out how to “communicate” from -verse to -verse.

Everything Everywhere All at Once is almost aggressively silly, using the idea of the multiverse and the suggestion that literally anything can happen at any point, anywhere to do things like change blood into organic ketchup or blow minds like they’re confetti. (Literally.) At one point a character realizes that the unique memory he has to generate to hop from -verse to -verse involves the use of a trophy that looks more than a little like a buttplug, and, I mean, if you can’t imagine how that plays out or how it could be done in a way that generates genuine belly laughs, well, maybe this isn’t the movie for you.

But the silliness is deployed by Daniels as cover to keep cynics in the audience from being overwhelmed by the earnestness at the heart of Everything Everywhere All at Once. This is a deeply moving movie, an extended meditation on the meaning we derive from family and friendship. On the power of kindness. It’s a rousing rejection of the irony-soaked meme-mind that has so come to dominate the political and cultural discourse, the “lol nothing matters” state of mind that so many of us have adopted to protect our psyches from the realization that we have very little impact on macro trends. And it all works because Ke Huy Quan gives one of the best, most heartfelt performances I’ve ever seen on the big screen. Love—for his wife Evelyn, for their daughter Joy, even for the taxwoman Deirdre—pours out of him, overwhelms the bloody ugliness onscreen. 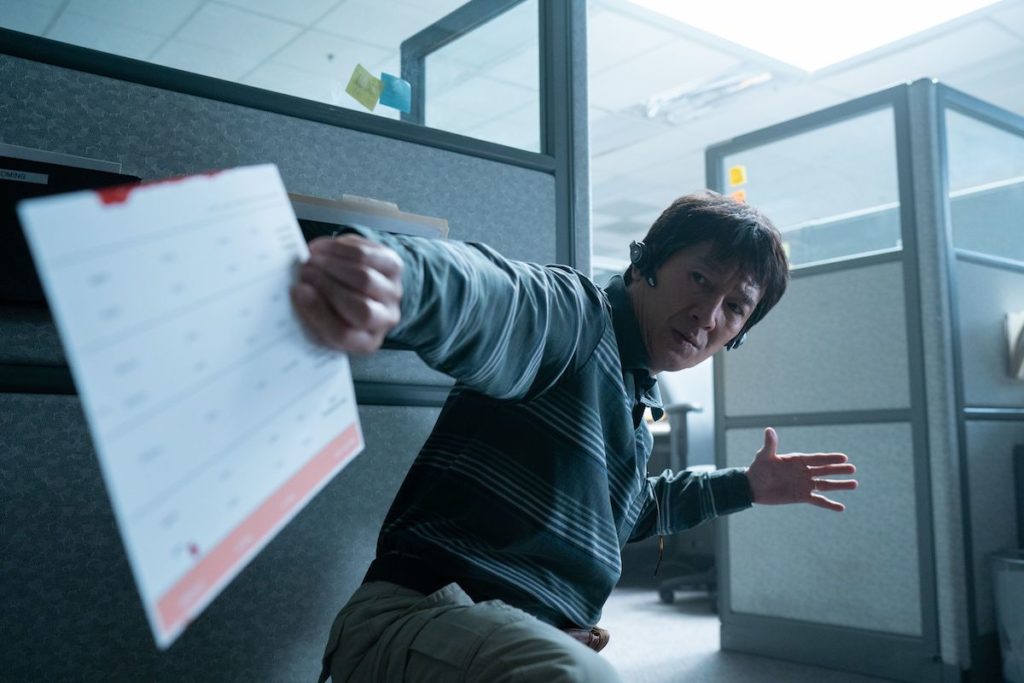 Everyone in this movie is great. Yeoh is always great, so no surprise there. Hsu simply nails the dual nature of being young—the simultaneous desire to be loved and to reject everything at the same time. Evelyn’s father is played by the legendary James Hong (Blade Runner, Wayne’s World, and maybe more movies than anyone else) and it’s always a pleasure to see him onscreen. They all seem to have genuine affection for each other, and that’s where the movie’s power resides. Everything Everywhere All at Once is, ultimately, a story of family and the way in which family does more to define us or give us purpose than anything else.

In a better, more elegant age, Daniels’s blending of genres and deft combination of deep emotion and spontaneous gusts of laughter would make Everything Everywhere All at Once an enormous, monstrous hit at the box office, one that played for months and found new audiences every week as it expanded around the country. It has the potential to be a generation-defining film, the sort of picture that shows why movies matter and how movies can move us. The way I felt walking out of Everything Everywhere All at Once reminded me of how I felt after The Matrix: I’ve never seen anything quite like it and immediately wanted to see it again. Do yourself a favor and watch it as soon as you can on as big a screen as you can.