Algorithmically speaking, I’m what you would think would be a prototypical Glenn Youngkin voter: a white male around 40 with a near-perfect voting frequency and obvious signs that throughout my voting life, I’ve been a Republican. That is the kind of publicly accessible information that can be hoovered up by anyone building databases for advertising campaigns.

Much less readily available, though, is the kind of information that would distinguish a Trump-supporting Republican from a longtime Republican now critical of the party and of Trump.

Which is why I wasn’t surprised to get this advertisement yesterday on Facebook: 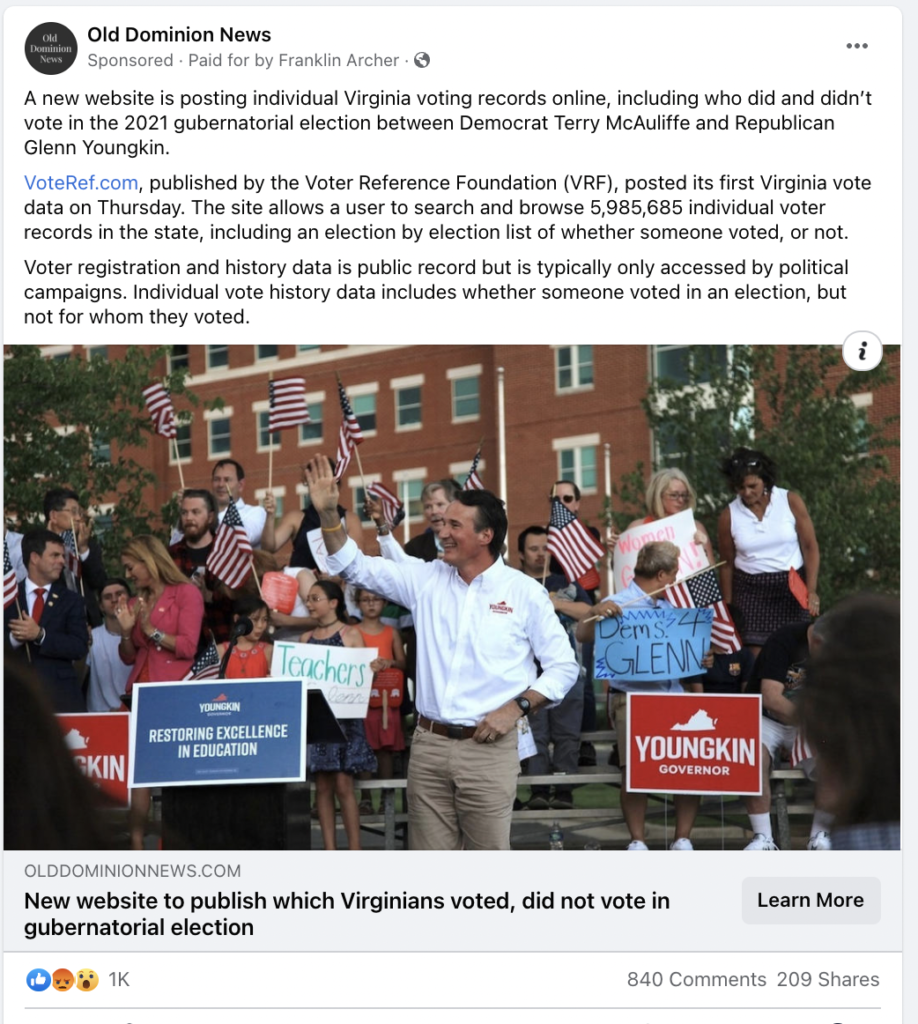 The promoted Facebook ad was for a supposed publication with a Plain Jane logo, the “Old Dominion News.” It’s a page that had fewer than 20 likes as of Sunday night—which is to say, it was little-read and obscure. It is clearly a fake publication trying to push people like me to turn out to vote.

Despite the “publication” having such little influence, the ad has 840 comments and 209 shares.

It turns out that “Old Dominion News” is an example of what the Columbia Journalism Review calls a “pink slime” outlet, one among hundreds. The sites

can be traced back to conservative businessman Brian Timpone. In 2012, Timpone’s company Journatic, an outlet known for its low-cost automated story generation (which became known as ‘pink slime journalism’), attracted national attention and outrage for faking bylines and quotes, and for plagiarism. Journatic rebranded as Locality Labs in 2013; Locality Labs is behind many of the publications we discovered that mimic the appearance and output of traditional news organizations. These sites do not bear much information about their political use or funding, but some of them have been funded by political candidates and lobbying campaigns. Metric Media, Locality Labs (or LocalLabs), Franklin Archer, the Record Inc., and Local Government Information Services (LGIS) are the main organizations involved in operating these networks of publications, and Timpone is associated in one way or another with each of them. Michigan Daily has detailed the convoluted relationship between these organizations.

When I clicked through the Facebook ad, I was brought to an (obviously fake) article about a new website:

Affording [sic] to its website, VoteRef.com is “dedicated to ensuring transparent, accurate and fair election” by providing public access to official government data pertaining to elections, including voter registration rolls, with a goal of encouraging greater voter participation in all fifty states.”

“Our system of government is based upon citizen participation. We believe the people, in effect, own this data and have a legal right to see it in an understandable and transparent form,” the site says.

VRF’s executive director is Gina Swoboda, formerly an executive with the Arizona Secretary of State.

There are a few things to unpack here.

First, the website that the “news” article points to, VoteRef.com, resembles the mailers that political parties and organizations have used in previous election years and again this year. The idea of these mailers—targeting algorithmically selected voters—is to try to shame the recipients into voting. Maybe the guilt over seeing your own past voting record would get to you; maybe the fear that your neighbors can see that you haven’t voted will get to you; either way, the idea is for you to hie yourself to the voting booth.

Second, keeping in mind that this astroturfing fake news site exists only as a way of taking advantage of Facebook’s algorithms, it’s hilarious that two of the top trending stories on the site are attacking . . . Facebook:

Third, check out the entity behind that VoteRef website: the “Voter Reference Foundation” and its executive director, Gina Swoboda. This new organization has reportedly been spreading lies about the 2020 election. And Swoboda, who served as the director of elections for the Trump campaign in Arizona, is herself apparently a devotee of conspiracy theories about the 2020 election:

Swoboda is also an apparent Sharpiegater, attesting to a conspiracy theory that has been debunked by officials' testimony and abandoned by the Trump campaign's own lawyer who now claims it's not not to their case.

(It's in their complaint and all over the affidavits.) pic.twitter.com/ErGYSZuAWe

Finally, one can’t read too much into either the Youngkin or McAuliffe campaigns (or their allies) in Virginia based on the use of this sort of eleventh-hour Facebook advertising and astroturfed news outlet. This fake publication—and the hundreds of other such fakes out there, and the ads promoting them—are reminders of just how much money is mysteriously sloshing around on the hidden, fake-news, data-driven side of our politics.

As McKay Coppins reported in the Atlantic last year:

According to one longtime strategist, candidates looking to plant a negative story about an opponent can pay to have their desired headlines posted on some of these Potemkin news sites. By working through a third-party consulting firm—instead of paying the sites directly—candidates are able to obscure their involvement in the scheme when they file expenditures to the Federal Election Commission. Even if the stories don’t fool savvy readers, the headlines are convincing enough to be flashed across the screen in a campaign commercial or slipped into fundraising emails.

Cambridge Analytica may be dead and gone, but its successors are still clunking along.

Are Democrats Trying to Lose Elections?

Is Eric Adams the Democrats’ Next National Star?