Monumentally impressive in every way, The Beatles: Get Back, Peter Jackson’s three-part mini-series documenting the beginning of the end for the quartet from Liverpool, is a paradox. It both dispels and reinforces the myths about the greatest and most influential rock band in history. The project’s very length is one cause: distilled from over 60 hours of film footage and 150 hours of audio, the eight-hour documentary’s sheer scale increases its scope, making it expansive in tone and story. But the series’ confounding nature derives from the lack of commentary from talking heads.

There’s no commentary by the two surviving members of the band, or any other contemporary musician, or any critic, or any famous Boomer recalling his first memory of the Fab Four. The result is a sort of Rorschach test as the viewer projects onto it the meaning they want it to have.

This doesn’t mean Jackson refrains from manipulating the audience; he simply does so by letting the footage speak for itself. There’s a scene in the third episode where the band and their collaborators are listening to the latest take of the title song, the one that’s actually on the album, Let It Be, when Ringo offers Yoko a piece of chewing gum, which she summarily rips in two. The song continues as we cut to minutes earlier to show the band playing the tune. Cut back to Yoko as she practically shoves the gum in John’s face, inches away from his eyes, but he is in such deep conversation with Paul next to him that he doesn’t even notice the love of his life. So Yoko gently places it in John’s hand, who instantly throws it in his mouth like a sheepish kid gulping down whatever his mum just gave him, and playfully raises his eyebrows. It’s all very chilled and laid back.

Get Back offers a glimpse at the platonic ideal of The Beatles. The age-old cliché that John, Paul, George, and Ringo were not just friends but a family is vindicated. In fact, the entire posse around them, from Mal Evans, their gentle giant of a road manager, to Neil Aspinall, head of Apple Corps, feel like an extension of the core group. When the band reunites for the first time in the cavernous Twickenham Studios to ostensibly make a film, record an album, and rehearse for a live show the venue for which remains a mystery, it’s like an awkward family reunion. The Fab Four are clearly uneasy with each other, both as surrogate brothers and members of the band. These initial days of writer’s block and frustration bring out their worst impulses: Paul’s professionalism graduates into full-on patronization. John, nursing a comedown or possibly still high on smack, is aloof and churlish. Feeling dismissed by the band’s two main songwriters, George simply quits the band. Ringo remains the only accessible and constructive one of the four.

There’s a lot to take in during these bleak, early days, and Jackson’s lack of editorializing has led to varied interpretations of key scenes. We don’t just feel like a fly on the wall, but almost an active participant of the daily goings on. And yet no one can agree on what it is exactly that we are observing. Probably the signature moment of the entire endeavor takes place a few days after the band has first convened. They are all still wary around each other as a frustrated McCartney starts riffing on his bass, waiting for something, anything to come up as Starr and Harrison sit across from him. It takes only a few minutes for Paul to compose “Get Back,” even (more or less) composing the first two lines of the lyrics as we now know them.

Yes, Ringo looks a bit distant and sure, George yawns through the whole thing, and as a result many read this as a microcosmic view of the group’s dynamics. But that’s not how I read it. It’s first thing in the morning and the lads are still groggy from the night before. That Ringo and George are patiently waiting for inspiration to strike feels like something they had done many times before. And once it does, and the bare bones of the tune are apparent, George says it’s “musically great” and starts strumming along as Ringo provides rhythm by clapping along. Hungover or not, they are a band again.

Further, the absence of John during these sessions, either physically or mentally, dispels another myth, one of Lennon’s own making. Previously, what we knew about John’s contributions came from the film Let It Be, but more importantly what he said took place in Lennon Remembers and other interviews: Basically that he got no support from Paul, who dominated the whole thing, a notion backed up by Harrison. But the footage shows Paul as almost paternalistic in his professionalism while George throws dig after dig his way and Lennon just sits there, mouth agape, staring at middle distance. It’s much cooler to watch this and think “the hepcats are rolling their eyes at the taskmaster Paul,” but the footage doesn’t support this.

But perhaps I’m projecting: I admit that Paul has always been my favorite Beatle. 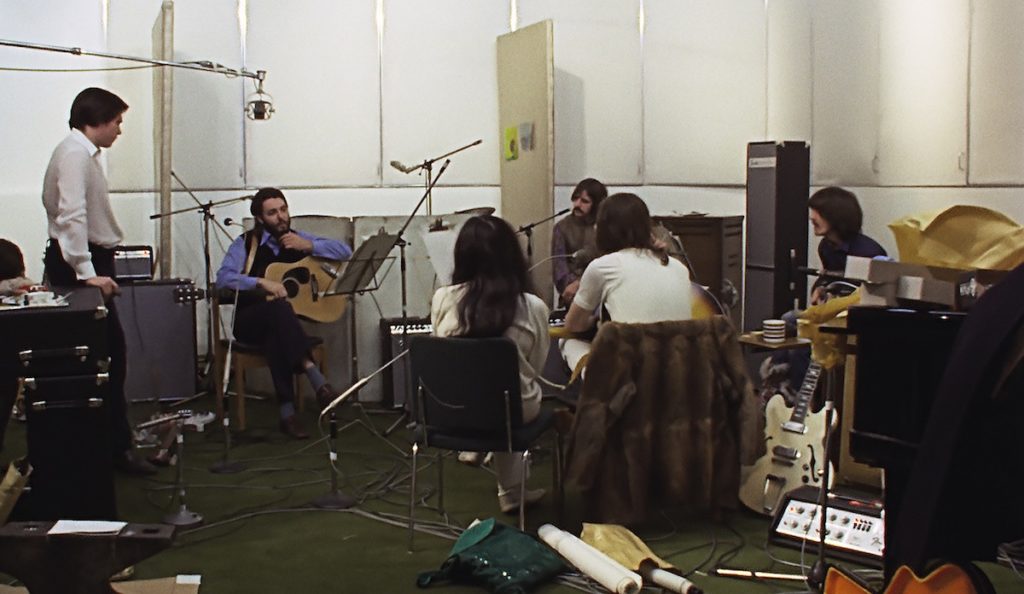 Even at their cattiest, the band members seem to be having a family argument rather than being in the throes acrimonious rancor, as had previously been the commonly accepted nature of this particular phase of the band’s history. After George leaves the band, Paul and John have a private conversation, secretly recorded by the film crew. For the first time, Lennon seems engaged, admitting that they have been dismissive of George, and that Paul has been domineering in his approach. But this feels like the sort of engagement that Paul could’ve used while he was dangling out there alone being sneered at by Harrison. I was talking to the actor Curtis Armstrong about this yesterday, and he put it perfectly (check out his book, by the way, it’s terrific): “John waits until the two of them are (apparently) alone, to reveal all this stuff. Condemning McCartney for his behavior, but also taking responsibility for doing it himself. Admitting that most of the time when McCartney insisted on arrangements, he was right to do so, except when he wasn’t. Evenhanded. In a script, Paul was the dad being reasoned with by the mom (John) about not being so hard on our George, who after all is just acting out. And Paul, in response to this, never once says, well, why didn’t you say this during the last few days of hell? Instead, it’s just, ‘Yeah, I know…’ over and over. It’s a kitchen table scene in a fifties English family drama, only no one winds up crying or drunk and smashing plates!”

Paul’s paternal instincts come to the fore in other throwaway moments. He is always early, either the first one there or arriving just after Ringo. In one scene, before the day starts to get going, he talks about the piano and how “all the music that’s ever been written” is there in those keys. He has an audience of one, Paul Bond, the wide-eyed clapper/loader, beaming with an infectious smile on his face, in full realization that he is getting a private lesson from Paul Bloody McCartney!

There is a gap of five days or so after George has quit the band and before the other three convince him to return. It’s obvious that they have had some serious talks in the interim: When they regroup at Apple, it’s Paul, who comes in late and is slightly aloof, perhaps a tad pissed off that his status as boss has been compromised. But he remains in control. At Twickenham, the power belonged to the person who was there early. Responsible. Disciplined. Doing the job. But this time, it belongs to the one who comes in late. Paul seems to be admitting to having caved to George’s demands, but when he saunters in late, it’s just to show everyone that he’s still “daddy.” So, yes, the documentary seems to confirm that Paul was perhaps a bit too overwhelming during these sessions, but it also shows us why. Paul is basically the “this is fine” meme personified.

Perhaps the best moment of both repudiation and confirmation of the Beatles legend comes in Part One leading to George’s exit. John’s catatonia momentarily gives way to something like inspiration as the band rehearses, and he and Paul finally connect. They’re making eye contact, smiling, playing together and they cut to George, watching them; his eyes going back and forth, realizing he’s lost his power. If John is on fire with Paul, he’s outside again. The politics of friendship is in plain view. Like it were scripted. 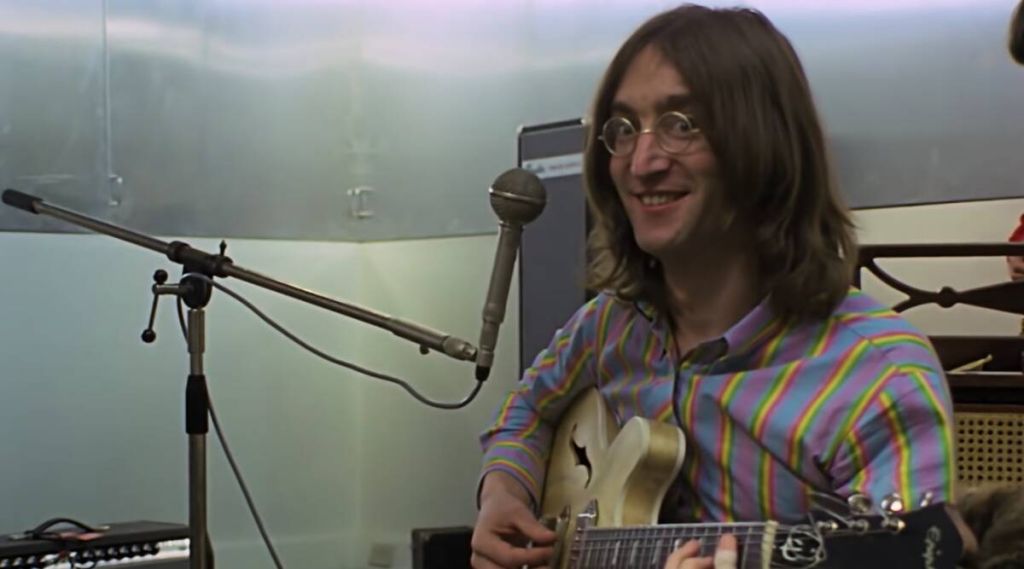 While wondering about how to decorate the Apple Crops basement, George jokingly suggests they should do a collage of “all our gold discs on the wall.” Laughing, John replies: “If you can get them off Mimi’s wall.” It’s these sorts of uninterrupted, moments of naked truth where Peter Jackson’s gargantuan project truly excels. Yes, it’s very long. No, it doesn’t have anyone leading us through one emotion to the next. And I’ve got a feeling (ho-hum) that those with no particular investment in The Beatles will not be won over by this (if they get through it at all).

However, for anyone who is obsessed with not just this music, but this family, it is a treasure trove. It confirms their godly talents and frail personalities, but it does so by refuting so many things we believed were true for over fifty years.

Ali Arikan is a writer in Turkey whose work has appeared at RogerEbert.com, Slate, The Village Voice, Hollywood Reporter, IndieWire, Slant Magazine, and the BBC.