Hispanics and the COVID Recession

Hard-hit and hard-working.
by Brent Orrell
Los Angeles County Supervisor Hilda L. Solis joined The Consul General of Mexico Marcela Celorio for a press conference to announce a new COVID-19 testing site at the Mexican Consulate office in Los Angeles.The free testing site opened August 12, 2020 with data revealing that Latinos in L.A. County have been disproportionately impacted by COVID-19. Tests will be administered at this location five days a week with more than 1,500 tests to be administered weekly. (Al Seib / Los Angeles Times via Getty Images)
Share on Facebook Share on Twitter Share via email Print

COVID-19 and its accompanying recession have been hard on everyone—but one demographic group seems to have suffered more economically than others. In looking through the data of AEI’s recent poll on employment attitudes and opportunities, it’s hard to escape the conclusion that when it came to illness-driven job and financial impacts there were actually two pandemics: one for Hispanics and one for just about everybody else.

Overall, our poll found that Hispanic respondents were twice as likely as whites (18 percent vs. 9 percent) and almost four times more likely than blacks, to report having contracted the virus. (CDC statistics say that COVID cases are 1.1 times as likely as among blacks as whites and 1.9 times as likely among Hispanics as whites.) Unsurprisingly, Hispanics were also much more likely to report knowing someone who had contracted the virus. Only 19 percent of Hispanics reported they did not know someone who had had the illness (roughly the same as whites), compared to 30 percent of blacks.

The stay-at-home orders and layoffs took a larger toll on Hispanic workers and families. Forty-four percent of Hispanics said either they or someone in their household lost their job or had hours reduced, compared to 24 percent of blacks and 22 percent of whites. To make ends meet, Hispanics dipped into their retirement accounts during the pandemic to pay their bills at a significantly higher rate, 24 percent, than either blacks (20 percent) and whites (18 percent). Hispanics were more likely than whites or blacks to have worked part-time and minimum-wage jobs or in positions where tips were the main source of compensation. Hispanics also reported greater economic distress on measures like “lack of money” and “cost of living,” with almost one-third citing housing and living costs as the most important problems facing their household. 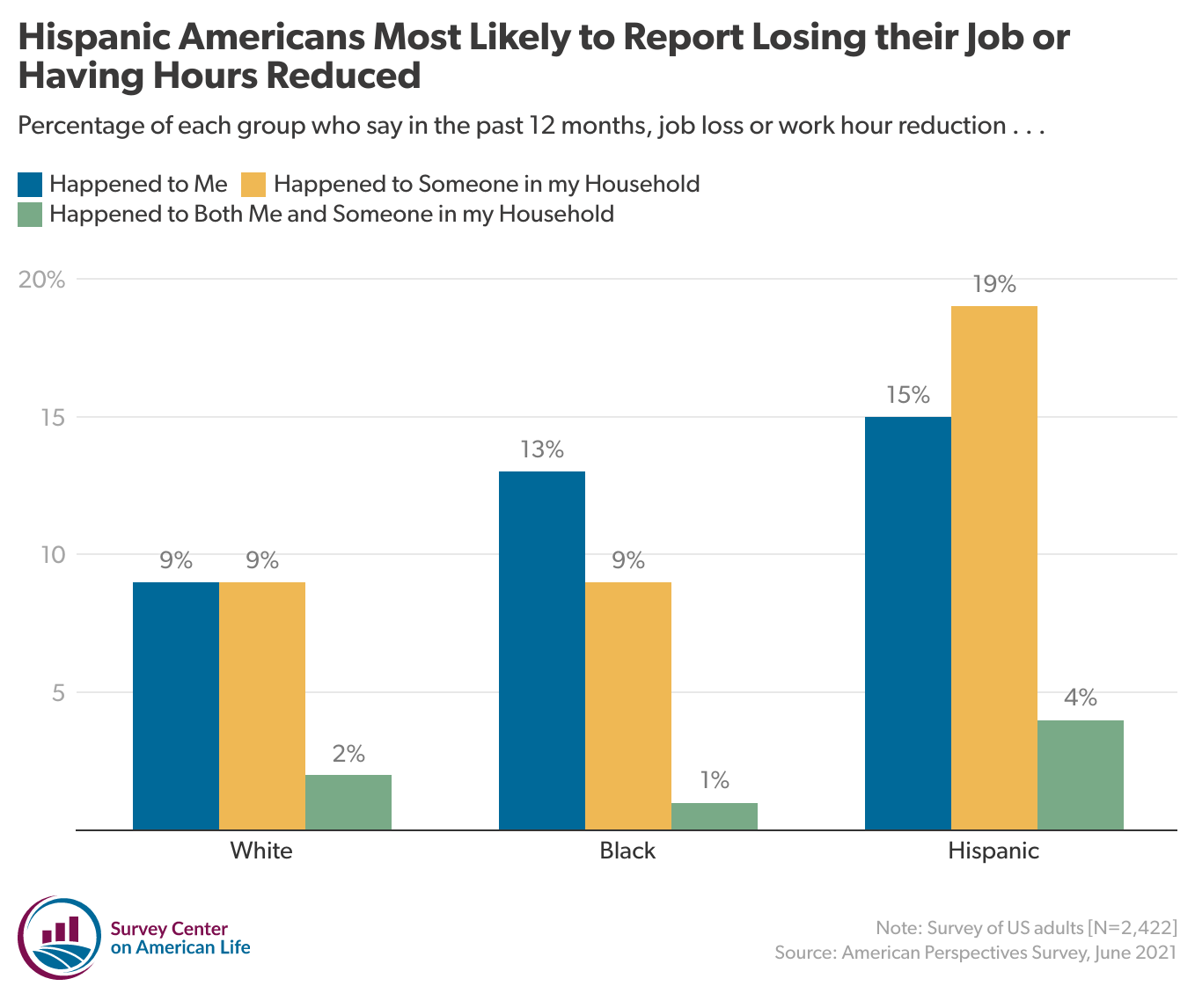 Together, these numbers paint a portrait of a Hispanic population that places a high value on work, is seeking new skills aggressively, and does not want to spend time out of the workforce. Hispanics are also somewhat suspicious of what they see as overly generous unemployment insurance (UI) benefits. While not as critical as whites, Hispanics were three times more likely than blacks (35 vs. 10 percent) to say the government was doing too much to help the unemployed during the pandemic. Thirty-three percent of Hispanics said the UI benefits were too generous, compared to 13 percent of blacks. (Forty-six percent of whites agreed the UI benefits were excessive.)

At the same time, Hispanics are not, strictly speaking, libertarian boot-strappers. They are strongly supportive of other measures that seek to ameliorate challenges faced by working Americans. They favor a $15 dollar-per-hour minimum wage (82 percent favor vs. 53 percent of whites), more federal childcare spending (78 percent vs. 62 percent of whites) and a universal basic income (60 percent vs. 36 percent of whites). 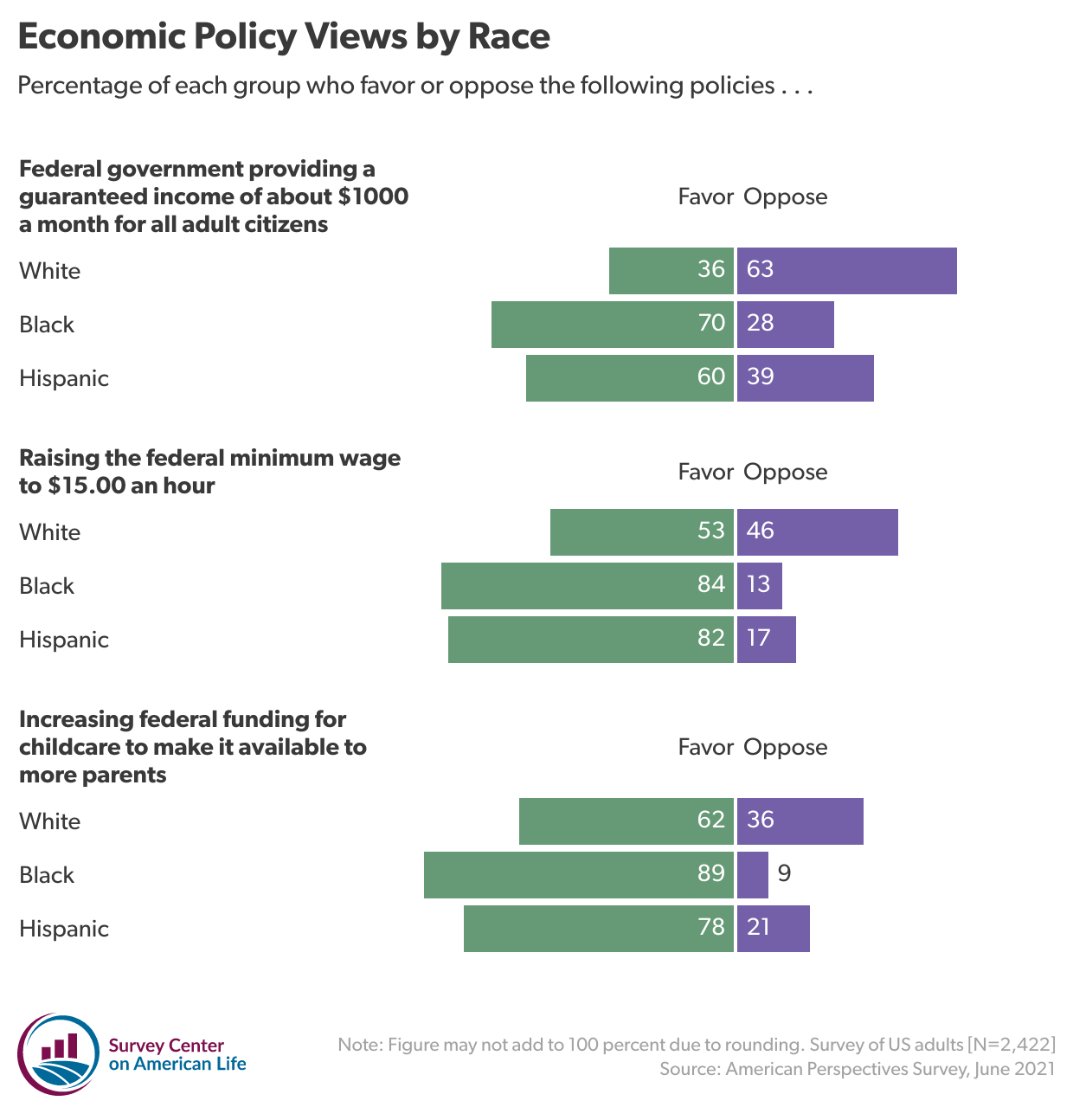 In other words, Hispanics are conflicted on the degree to which government should intervene in the economy, even under crisis conditions, and tend to take a more skeptical view of benefits that might discourage work while supporting some measures, like higher minimum wages and childcare subsidies, that ease some of the struggles faced by working families.

Various hypotheses have been bruited as to why Hispanics were more supportive of Donald Trump’s re-election than his first run in 2016 (e.g., support for religious liberty and law-and-order policies). Based on this data, the deep impact of the COVID-19 recession on Hispanics, combined with strong, pro-work and anti-dependence attitudes, needs to be added to that list.