Larry Hogan’s Successor May Be an Insurrectionist

The choice facing Maryland voters: a candidate endorsed by their popular governor or one preferred by the disgraced former president.
by Jim Swift
ANNAPOLIS, MD - MAY 15: Maryland Del. Dan Cox, a Frederick Republican, holds up a book of the Declaration of Independence as he addresses a group called "Reopen Maryland as they gather to protest the restrictions imposed by Maryland Governor Larry Hogan to combat the spread of the novel coronavirus. Most states and U.S. territories have begun to ease restrictions on businesses and social activity, moving to reopen economies battered by the novel coronavirus pandemic and weeks of stay-at-home orders that affected some 315 million Americans. (Photo by Jonathan Newton/The Washington Post via Getty Images)
Share on Facebook Share on Twitter Share via email Print

Larry Hogan is a two-term governor with an approval rate of nearly 75 percent, making him the most popular governor in America. He’s overseen “one of the biggest economic turnarounds” in the country. And he’s done so in a blue state that has overwhelmingly elected Democrats to the statehouse in Annapolis and only one other Republican governor since the days of Spiro Agnew. But this year Hogan is term-limited out, and the GOP has to decide whom it should nominate to be his successor.

On a saner planet far away from here, someone with Hogan’s resume would be the darling of the Republican party, a king-maker who could bestow his magic political touch on up-and-comers in need of his endorsement.

But that’s not the planet we inhabit.

Here on Earth One, the choices facing Republicans in the Old Line State are as follows:

You might think that the basketball troll would be the craziest SOB in the race.

Cox is a member of Maryland’s House of Delegates, elected in 2019 from Frederick County, a rural part of the state in the Piedmont Plateau wedged between Pennsylvania and West Virginia. A lawyer by trade, he’s 47, a devout Reformed Presbyterian, and the father of nine children. If you read through his bio, he seems like your general far-right Republican. He attended Pat Robertson’s Regent University for law school.

But if you look at his campaign website, the endorsements are . . . something else. There’s Doug Mastriano, the Trumpy candidate for governor of Pennsylvania; crazy Arizona state Senator Wendy Rogers; and Kim Klacik, who ran an embarrassing congressional race and insisted her election was stolen after a blowout loss, natch. Cox also enjoys the support of the Green Firearm Training Company, a couple of quacky “medical choice” COVID groups, and something called “The Machine Gun Nest.”

But the last major endorsement for Cox was a biggie. It comes from former President Donald J. Trump.

And while Trump has endorsed some pretty fringey candidates, Cox may be the fringiest of them all.

What attracted Trump to Cox? For starters, the fact that Cox sought to impeach Gov. Hogan, a “Never Trumper” whom the former president never liked. The delegate’s impeachment attempt, premised on Hogan’s relatively mild COVID restrictions, lasted a grand total of six minutes.

Incredibly, the governor’s office responded to the proceedings with this: “This guy is known to be a QAnon conspiracy theorist. He’s got this weird obsession with the governor. Surprised it took this long, frankly.”

Indeed, Cox and his running mate, Gordana Schifanelli, have tweeted the QAnon hashtag #WWG1WGA. When asked about his use of the hashtag, Cox responded: “I support President Trump and General Flynn and that’s all my point was about.”

When Sidney Powell put out a call on Twitter for #DigitalSoldiers to “find the facts” about globalists’ ties to China, Cox heeded the call with this bizarre, since-deleted, tweet: 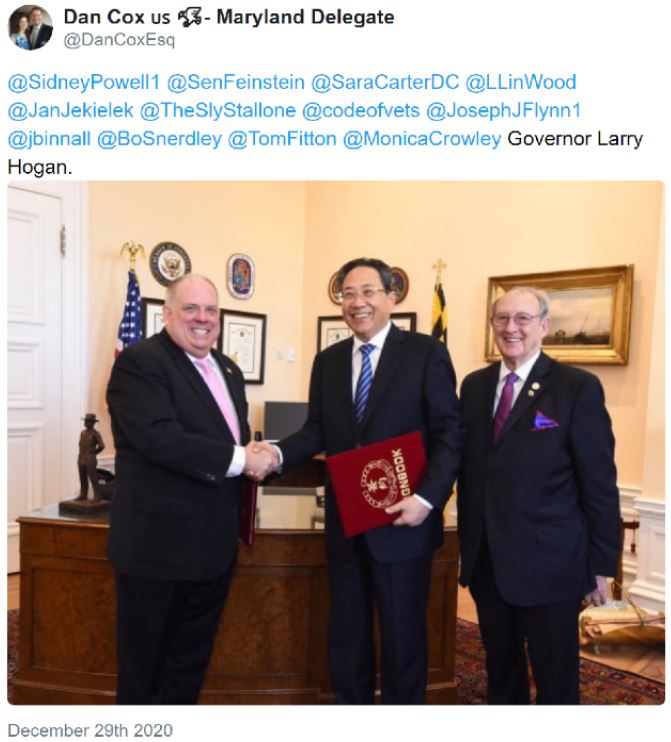 Maybe Cox thought Sly Stallone and Sidney Powell should undertake a serious investigation of Larry Hogan for ties to China based on this picture?

Or maybe it was a not-so-subtle racist attack on a governor with an Asian-American wife?

Like most QAnon types, Cox doesn’t believe Joe Biden is the legitimate president. He has gone so far as to say that there was substantial voter fraud in Maryland, a state Trump lost by 33 points.

This very fine individual was so certain that there was fraud that he was an active participant in the insurrection that attempted to keep Trump in power.

He organized three buses to bring people to the rally that led to the Capitol riot, and he called Vice President Mike Pence a “traitor” in a tweet that got him in hot water. To get out of the jam, he then drafted a lawyerly letter pretending to be sorry.

You will not be surprised to learn that Cox is also deeply concerned about the “grooming” epidemic that has been invented by the far-right media in recent months.

But this candidate is not satisfied with the perfunctory pedophilia accusations. Here’s a recent fundraising letter that accuses a mysterious cabal of wanting to “groom” kids for “chemical castration and sexual growth hormone blockers beginning in Pre-K.” The same letter accuses his opponent of wanting “Shanghai-style lockdowns.” 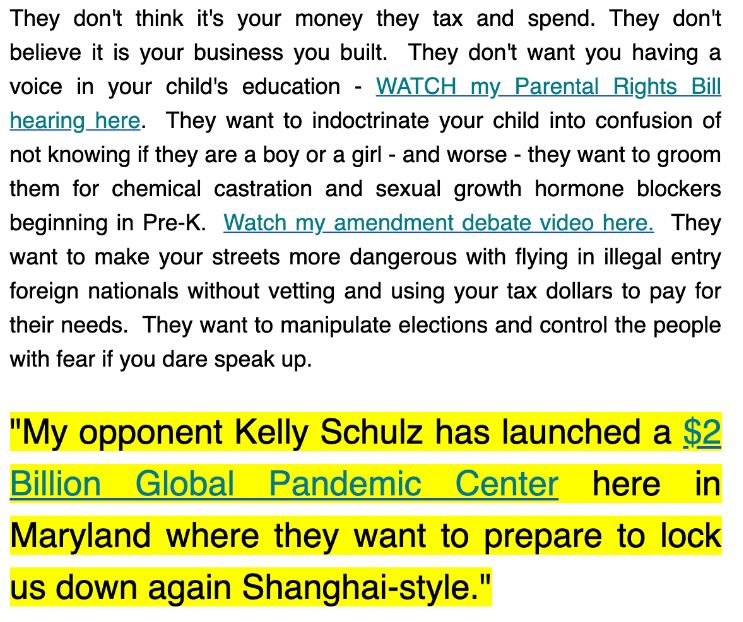 So to sum up, Cox is a race-baiting, conspiratorial kook who actively participated in the attempt to end our democracy on Jan. 6th.

This does not seem like a man who is a great fit for a blue state.

Which brings us back to the question of what Maryland Republicans will do when faced with a choice between him and one of Hogan’s deputies.

Surely the party is not so masochistic that it would nominate a wild-eyed Trumpist in a state where the former guy managed only 32 percent of the vote, right? Right?

Well, if a poll conducted on behalf of the Democratic Governors Association is to be believed, Republicans very well might do that. The survey by PPP found that a large swath of Maryland Republicans were undecided, with Cox leading Schulz by 8.

But then they asked the ballot question again after telling voters that Schulz was endorsed by Hogan and that Cox had been given the turkey-basted seal of approval by Trump.

And on the informed ballot—well, read it and weep:

When pollsters informed voters that Trump has endorsed Cox and that Gov. Lawrence J. Hogan Jr. (R) has endorsed Schulz, Cox’s lead grows to 52%-18%. The number of undecideds plummets from 69% to 30%.

Have these people lost their minds? Hogan has a 74 percent approval rating, and the Maryland GOP might just dump his handpicked successor in favor of the median poster on Ginny Thomas’s QAnon Facebook group?

Of course, we must add a caveat: This is just one poll of 565 Maryland Republicans from three months ago. It could be an outlier. But a 26-point swing is pretty far outside the margin of error.

And as someone who has spent some time in the parts of Maryland that aren’t close to Washington or Baltimore, I don’t find it a big surprise that Dan Cox has a real shot at winning the nomination. Rural conservatives significantly outnumber moderate suburban conservatives, and while Cox’s main opponent, Kelly Schulz, also lives in Frederick County, she doesn’t exactly play the part. Cox does.

Maryland Republicans have three months to come to their senses before the primary on July 19.

If they don’t—if Republican primary voters really turn their back on the most popular governor in America in favor of a nutty bigot—they will once more remind anyone who values competence and cross-party appeal that there’s no more room at the inn. 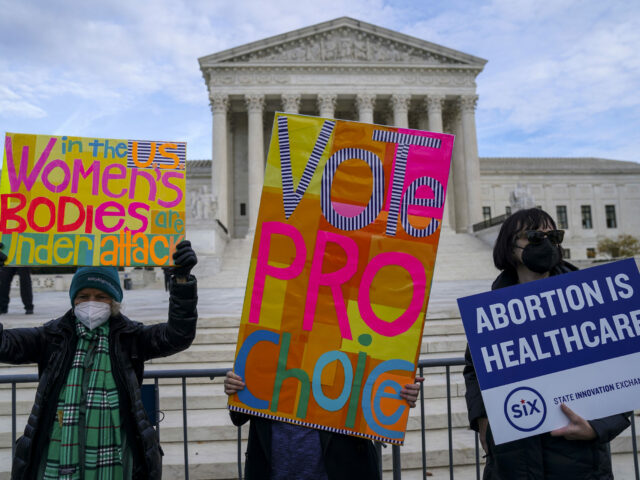