In the opening titles, we learn why this movie exists: In the year 1995, Andy, the little boy from Toy Story, saw a movie. That movie was this movie, and it would become his favorite movie, which in turn would inspire his mother to buy a toy from that movie (a Buzz Lightyear doll), who would in turn ruin the life of toy cowboy named Woody.

What Lightyear posits is: Maybe Woody was right to be annoyed that this joker was taking his spot on the bed?

The setup is simple enough: During a deep-space exploration mission, Captain Buzz Lightyear (Chris Evans) diverts from the planned trip to explore a previously unknown planet. While trying to escape the planet with the aid of fellow Space Ranger Alisha Hawthorne (Uzo Aduba), Buzz crashes the ship and is forced to awaken the scientists on board in an effort to fix it, generate some new lightspeed crystals, and get everyone on their way.

Nearing the speed of light during each of his runs testing the crystals, Buzz ages little while the city and its inhabitants grow in four-year leaps. He stews in his regret over days while Hawthorne raises a family over decades. After one final, successful test run prompts a 20-some year gap, Buzz comes back to discover the city has been surrounded by invading robots; he has only Alisha’s granddaughter Izzy (Keke Palmer) and her fellow not-even-rookies to save the city and get everyone off the planet and back on their mission. Hijinks ensue. 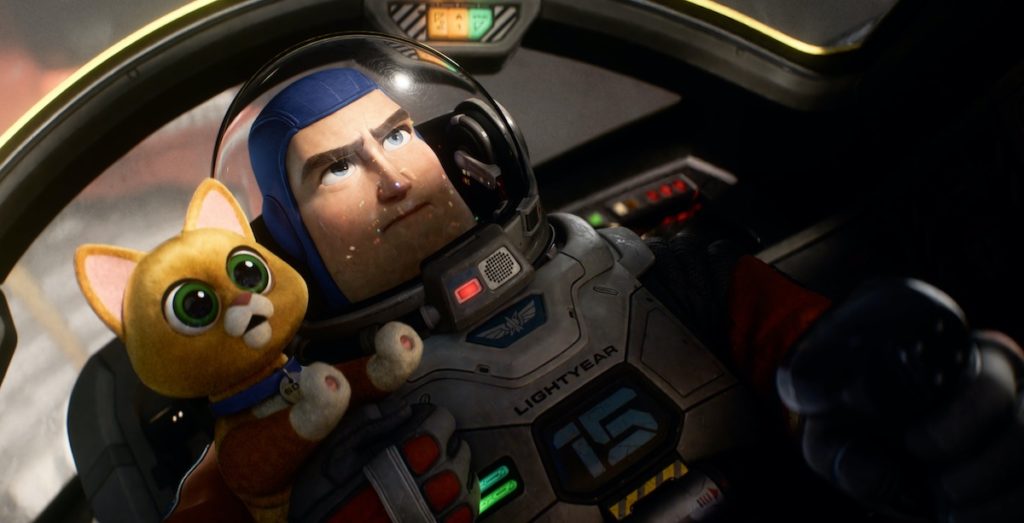 It’s not just that Lightyear is fairly mediocre, though it is. It’s that Lightyear is supposed to be something so mind-blowingly original and awesome—the references to Star Wars are not subtle—that it prompts a whole cultural shift, spawning sequels, video games, enormous toy lines, etc. Instead, it feels like a parody of what a studio would try to gin up if it were attempting a mercenary appeal to every baser instinct of the tween-to-teen set.

Spaceships? Check. Completely platonic relationships for the lead? You got it. Laser swords and laser guns and laser shields? Yup. A cute robot cat that serves as both a font of wisdom and comic relief? Absolutely. A ragtag group of misfits helping an overconfident leading man learn that he needs to accept help if he’s going to make it in this crazy, cruel world of ours? Obviously.

To complain about member-berries at this point is futile, I suppose, but there’s something … grating about each and every line of dialogue in this movie that echoes something Buzz originally said in Toy Story. Lines like “You’re mocking me, aren’t you?” or “Buzz Lightyear to Star Command, come in Star Command … Why don’t they answer?” Yes, we get it.

Or at least, I got it. Few of the kids who were watching in the theater seemed to care that much, judging by the running in the aisles and the talking and the yelling. The attention, it was not rapt.

Perhaps most disappointingly, this film continues Disney’s run of villainous concepts taking the place of genuine villains. Despite being handed the Vader-esque Emperor Zurg (James Brolin), an enormous, gleaming, hulking robot with whom to do battle, we learn in this movie that the real enemy is—you guessed it—trauma and regret. Just as the heroes learned in Encanto and Turning Red and Frozen II and Ralph Breaks the Internet—I could go on like this—Buzz learns that most of his struggles are internal in nature. What’s important isn’t defeating a bad guy! What’s important is learning to accept oneself and learning to accept others.

Seriously: the climax of this movie basically says, “Hey, kids, don’t strive to fix your mistakes; just settle and make the most of your mess.” It’s an ethos, I guess. But I find it hard to believe Star Wars would’ve inspired Andy to ditch Roy Rogers if Luke had decided that, hey, maybe killing womp rats on Tatooine was good enough after all.