In a Facebook post this week, Rowe decided to answer a question from one of his fans. The gentleman asked why, since Rowe had gotten a COVID vaccine, he had not used his platform to urge others to do so.

Rowe’s response is worth reading in full, because it is either an example of despicable dishonesty or breathtaking stupidity.

Rowe begins his explanation by saying, “I’m not a doctor, Steve, and even though I occasionally play one on TV, I’m not inclined to dispense medical advice to the people on this page.”

And you know what? That’s fair enough. If Rowe doesn’t feel comfortable telling others what to do when it comes to public health, that’s reasonable. Except that two paragraphs later he starts just asking questions about public health.

For a guy who makes his living pretending to be concerned with grubby details, this is a wildly, irresponsibly generalized set of charges. For starters, who are “those people”? No links here. No names. Just a vague, faceless assertion so he can’t be called out on facts.

But the individual characterizations he makes of what “those people” supposedly said are at best misleading and at worst, patently untrue.

Let’s go one by one.

“Two weeks to flatten the curve!” The idea of flattening the curve comes from late March 2020, when COVID was starting to run wild in the United States for the first time.

The curve in question was the rate of new infections and the curve needed to be flattened because it’s increase was so steep that it was nearly an asymptote. The country faced a shortage of PPE and doctors hadn’t yet come up with best practices for treating patients.

Had the rate of infection continued its geometric increase, not only would a higher percentage of COVID patients have died due to lack of adequate resources to care for them, but more non-COVID patients would have died because the healthcare system would have been overrun.

The idea of “flattening the curve” was never about beating COVID, but about buying the healthcare system enough time to be able to treat patients optimally.

And you know what? We flattened the fucking curve, Mike. And because of that, we saved a lot of lives. 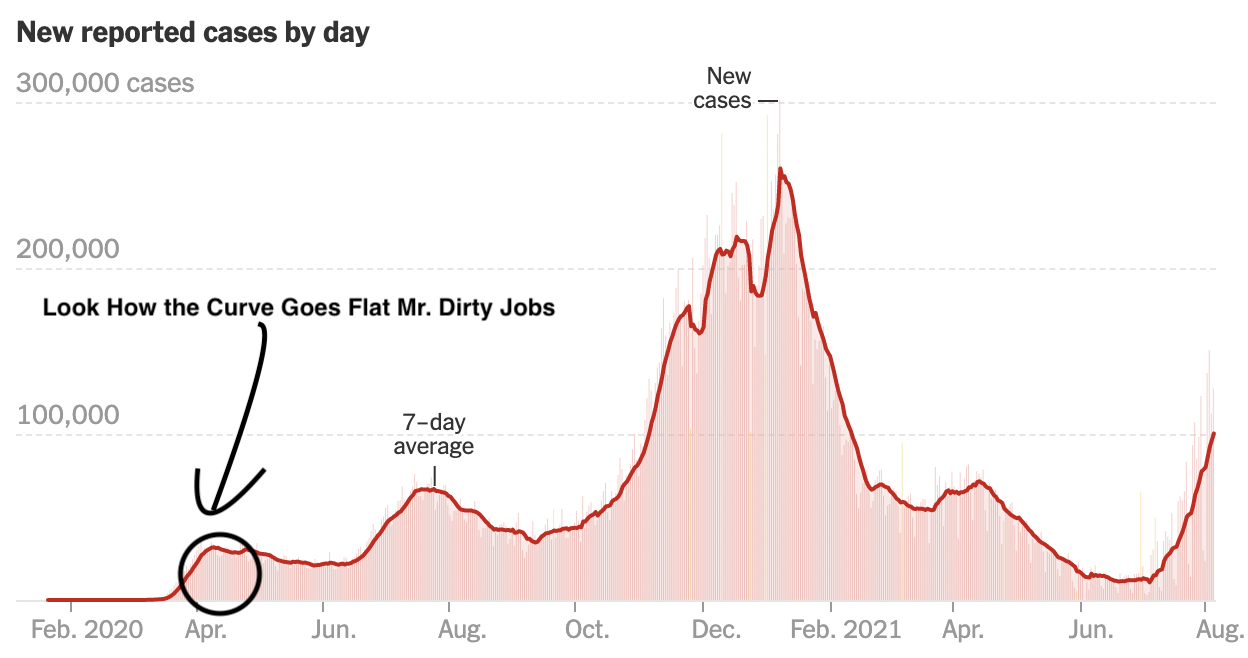 “The same people who told us that masks were ‘useless’.” Again, it’s hard to find details about “those people” but I assume Rowe is talking about Anthony Fauci’s comments to CBS News on March 8, 2020 where he said the following:

There’s no reason to be walking around with a mask. When you’re in the middle of an outbreak, wearing a mask might make people feel a little bit better and it might even block a droplet, but it’s not providing the perfect protection that people think that it is. And, often, there are unintended consequences — people keep fiddling with the mask and they keep touching their face.

Let’s stipulate that much of the medical establishment was slow to understand that the primary transmission mechanism for COVID was aerosolization. The scientific establishment, on the other hand, realized this fairly early. You should read about the fight between the two groups.

But the point here is that even Anthony Fauci, in this big gotcha moment, didn’t say that masks were “useless.” He used a heavily lawyered construct—no reason to be walking around with a mask—which was true.

So no, walking around America wearing a mask on March 8 wasn’t going to do you any good because the pandemic hadn’t yet bloomed.

Also, Fauci allowed that masks might block “a droplet” while warning that it wasn’t the “perfect protection” some people thought. Again: Both factually correct.

Was Fauci perfectly and fully transparent here? No. But neither was he saying what Rowe says.

One more thing: By June, Fauci was admitting that he soft-peddled masks in early March because he was trying to keep people from hoarding them at a moment when the public wasn’t in danger and didn’t need them, but front-line workers were and front-line workers desperately did. The shortage of PPE was widely covered at the time and almost certainly cost lives.

Maybe you’re okay with the noble non-lie and maybe you’re not. But the fact is that people were hoarding them at the time. And if this episode discredited Fauci for you for all time, then there are myriad other health officials who can and have verified the vaccines’ efficacy.

And of course, if this episode discredited Fauci for you, then I assume that Donald Trump has also been discredited for you because of how he liked “playing down” COVID.

“A return to normalcy would occur just as soon as ‘the most vulnerable’ among us were vaccinated.” I’d like to see a cite for this, because the most high profile example I can find making “back to normal predictions” is President Joe Biden who went in the opposite direction.

As my mother would say, with the grace of God and the goodwill of the neighbors, that by next Christmas I think we’ll be in a very different circumstance, God willing, than we are today. A year from now, I think that there’ll be significantly fewer people having to be socially distanced, having to wear a mask.

At the time, people lost their minds over this estimate because it was so pessimistic. But on February 16, we were still only getting 2.3 million doses administered per day and the government hadn’t yet solved the logistics problem left to it by the previous administration.

And by the by, Biden’s pessimistic estimate is looking pretty dead-on right now, isn’t it?

“Then, just as soon as ‘half the population’ was vaccinated.” Again, I have no idea who “those people” are. The medical and scientific establishments were exceedingly careful in not hanging numbers on what percentage of the population was needed to hit “herd immunity.” Most guesstimates put it in the mid-60s, but just about everyone involved was careful to acknowledge that they were dealing with too many unknowns to be making more than guesstimates.

“Then, just as soon as we achieved ‘herd immunity’.” You know who pushed the idea of “herd immunity” over and over? The COVID deniers and anti-vaxxers. Those people.

Those people who wanted to hold “chickenpox parties” for COVID instead of trying to mitigate the spread.

Those people who kept insisting that no measures were needed to combat COVID because herd immunity would save us.

Those people who declared we should just follow Sweden’s example and fast-forward to herd immunity.

Those people whose medical advice in March of 2020 was “Get it. Get immunity. Feel better. The herd triumphs.”

Mike Rowe is taking irresponsible bullshit from the bad guys and ascribing it to the good guys in an attempt to discredit them.

“Those are the same people who told us they wouldn’t trust ANY vaccine developed under the last administration.” Who are “those people” who said this? I’m sure you can find five people on Twitter who said something like it. Maybe even a guest on MSNBC. But show me serious people in the media, in medicine, in research, in politics—anywhere—who said such a thing?

Maybe he’s talking about Kamala Harris? But she said something very different than what Rowe charges. Here’s the interview with CNN on September 6:

BASH: So, let’s just say there is a vaccine that is approved and even distributed before the election. Would you get it?

HARRIS: Well, I think that’s going to be an issue for all of us. I will say that I would not trust Donald Trump. And it would have to be a credible source of information that talks about the efficacy and the reliability of whatever he’s talking about. I will not take his word for it.

This is the big gotcha? That Kamala Harris wouldn’t trust Donald Trump and would want a medical source to verify a hypothetical vaccine that was pushed out immediately before Election Day? Who could argue with that statement? The man was literally pushing quack miracle cures at the time and had a history of selling fake vitamins.

What Kamala Harris said is nothing close to what the anti-vaxxers on the right are peddling right now.

And for his part, even in the fall of 2020, Joe Biden was worried that Trump’s mismanagement of the pandemic was going to make people reluctant to take a future vaccine. Here’s what he said:

Why do we think, God willing, when we get a vaccine—that is good, works—why do we think the public is gonna line up to be willing to take the injection? We’ve lost so much confidence, the American people, in what’s said . . .

Joe Biden was doing exactly the opposite of what Rowe says “those people” did. He was trying to argue against distrust of vaccines developed under Operation Warp Speed.

The reality is that our problem has been the exact opposite. The people who maintained over and over that COVID-19 wasn’t real, that it was an exaggeration, that it was a media conspiracy to hurt the Orange God King—many of those people now won’t take the vaccine because it has been administered by the new administration.

And many of those people are paying for this decision with their lives.

If Mike Rowe doesn’t want to encourage people to get vaccinated, that’s his right. That’s his privilege.

But to go out in public and misrepresent recent history in an attempt to discredit vaccines is reprehensible.

Rowe says he wants people to make their own decisions. Great. I celebrate everyone’s choices. But they should make them without Mike Rowe lying to them about the real things which happened in the real world.