College campuses might as well be Petri dishes.
by Daniel McGraw
A pharmacist fills syringes with Pfizer-BioNTech COVID-19 vaccine. At Alvernia University in Reading, PA Monday morning April 12, 2021 where the school, working with Rite Aid Pharmacy, held a COVID-19 vaccination clinic administering doses of the Pfizer-BioNTech vaccine for staff and students in the Physical Education Center. (Photo by Ben Hasty/MediaNews Group/Reading Eagle via Getty Images)
Share on Facebook Share on Twitter Share via email Print

The current debate over whether universities can require their students to be vaccinated for COVID-19 before coming to school this fall is the latest example of extreme political idiocracy at play. Red state legislatures are taking the “how dare you violate our students’ civil rights by forcing this upon them” message, which of course, is based on the fact that a state representative knows more about health policy than an epidemiologist at the state university who has studied infectious diseases for decades.

And what makes this even more insidious in how this is playing at colleges and universities is that they already require vaccinations for a whole host of diseases. A majority of higher education schools require that their students come to campus immunized against measles, mumps, rubella, polio, meningococcal disease, and other infectious diseases.

The reasons for a multitude of vaccination requirements for college students is very basic: campuses are a breeding ground for infectious diseases, because students live in overcrowded dorms and apartment complexes, coupled with the fact that their social and educational interactivity means they are stacked on top of each other literally and figuratively 24 hours a day. These campuses are in essence the most ideal petri dish environment in the country for spreading infectious diseases.

And yet, according to the latest data, of the 3,200 four-year public and private colleges and universities in the United States, only a little over 600 are requiring that their students come to school this fall vaccinated for COVID-19. That means 75 percent of the schools—which have a 60/40 private/public split—say it is fine for anyone to enroll at their campuses without being vaccinated for COVID-19 (but if you aren’t vaccinated for polio, stay away).

One would figure that a disease that has killed more than 600,000 Americans in the last 18 months would put a target on students’ backs for vaccination. The coronavirus, and its variants, check all the boxes: it’s transmitted through personal contact, there is a vaccine readily available to prevent these infections, and these young people in the petri dish of college campus life are one of the least vaccinated demographics in this country.

You’d figure it would be a no-brainer. As in, require they are vaccinated before they set off to study biology, watch football, go to dude-brobarian frat parties, and contemplate whether molecules under your fingernails could contain complete universes.

What gives? Make sure students have been vaccinated for mumps and polio, but not for the disease currently raging across the globe?

The former chancellor of the University of North Carolina-Chapel Hill, H. Holden Thorp, has laid out clearly what is going on here: political tribalism has taken over for science on this. Thorp wrote recently in the American Association for the Advancement of Science magazine “Colleges Need Vaccine Mandates” on this subject, and concluded, in part, that academia is running scared of the big boy legislators in the state capitals. Thorp writes:

“I wrote to several higher education administrators and local government officials to ask their opinion about vaccine mandates,” Although they privately agreed that every college should require mandates, no one was willing to say so on the record. They were all worried that Republican legislators will punish the universities if they come out swinging. Like other measures to limit academic freedom and circumvent faculty expertise, this is another example of politicians and politically appointed trustees overreaching their appropriate roles in higher education policy.”

“Officials at universities and in government need to take a stand regardless of the political consequences for the institutions. Lives are at stake.”

It is not hard to see how this has all played out. The Chronicle of High Education has kept a tally of which schools are requiring vaccination of their students, and which ones aren’t. 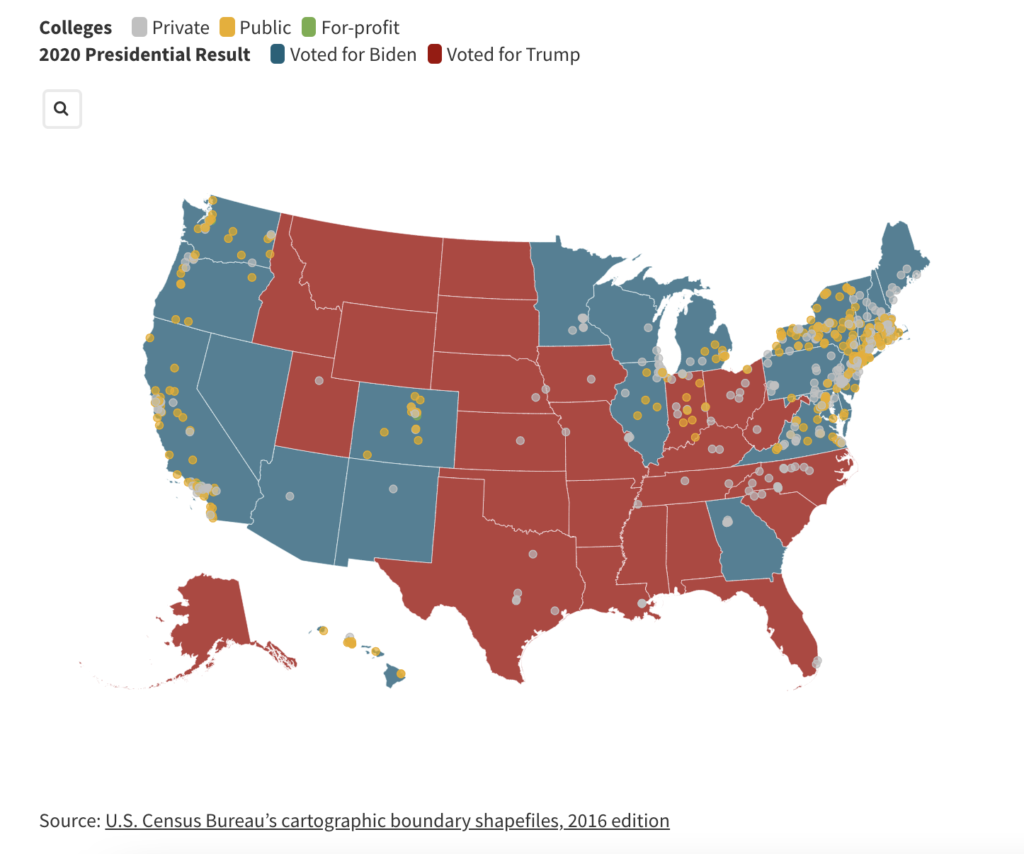 Massachusetts has about 50 schools requiring vaccination this fall, Mississippi has none. Alabama, Alaska and Arkansas also have no school vaccination requirements. California has about 65 schools that require vaccination proof, Colorado has 12, and Connecticut has about 17.

In Virginia, which voted for Joe Biden, the latest count has 25 schools requiring vaccinations, including big public universities like the University of Virginia, Virginia Commonwealth, VA Tech and Old Dominion. That equals about 375,000 students going to college in VA this fall that will have to be vaccinated to enroll, and that equates to about 63 percent of the state’s total enrollment.

What makes the number of required vaccinations so important is that adding the public universities to the required status can mean a lot of people becoming vaccinated. In Ohio, for example, if the other 13 public universities besides Cleveland State University required vaccination for its enrollees, it would mean probably about 150,000 – 200,000 more college students would be vaccinated in that state than are now.

There has been a legal victory of sorts for those championing vaccination requirements. A federal judge sided with Indiana University in a lawsuit filed by eight students who challenged the school’s vaccine mandate, as well as required face-masking and testing. The students had claimed that the vaccine requirement violated their due process rights under the Fourteenth Amendment.

In denying the students’ motion for a preliminary injunction, U.S. District Court Judge Damon R. Leichty ruled in mid-July that the students failed to show any proof of their claim that IU lacks a rational basis for its vaccine requirement.

Leichty wrote that the Fourteenth Amendment allows the university to pursue “a reasonable and due process of vaccination in the legitimate interest of public health for its students, faculty and staff.” He specifically cited the legality of policies that protecting public health, the history of making students show vaccination proof for diseases like polio are valid, and how the science shows that mandated vaccinations at Indiana University can be good, local public policy to protect citizenry, including those who are not students and live near the school.

Many of these legislative moves to strike down vaccination mandates on campuses may just be moot posturing now. Some schools are trying to get around legislative restrictions on required vaccinations by making alternatives—still enrolled, but denying campus housing, forced weekly testing, and remote classroom attendance if not vaccinated—that may be enough to force a large number of students to get vaccinated.

Plus, the Food and Drug Administration will formally approve of the vaccines in mid-October, and at that time, the legalities of banning vaccinations will become different. But expect the posturing to continue. A Republican state senator in Wisconsin is moving forward with a plan to block public universities from doing any COVID-19 testing and screening without approval from GOP lawmakers. State Sen. Steve Nass said his legislative proposal would not require students to inform schools of their vaccination status or wear masks on campus. He said some University of Wisconsin school chancellors are “moving quickly to take advantage of the delta-variant hysteria to enact excessive COVID-19 mandates.”

But what is odd in all this is that these legislators seem to have no ability to do math. There are 14.6 million students at public institutions in the United States and 5.1 million students at private institutions. That’s about 20 million college students. The 18-39 age group, which most all of the student fall into, have a vaccination rate of about 50 percent, the lowest of all adult age groups. . Having an aggressive vaccination campaign in conjunction with the universities could easily move more than 5 million Americans into vaccinated status by the end of September.

But the universities need to take a stand, as former UNC chancellor Thorp wrote, pointing out that “for some public universities in ‘red’ states, where vaccine mandates are not permitted, an aura of uncertainty will hang over the campus and the local community, a foreboding sense that another outbreak could be at hand.”

About 15 states have either passed laws restricting vaccination requirements at higher education schools, or are in the process of doing so. An executive order in Arizona from the governors’ office not only bans requiring proof of vaccination from students, but also goes further to eliminate mandatory testing and face-masking requirements for unvaccinated students.

“I think the policy is a disgrace,” said Elizabeth Jacobs, a professor of epidemiology and biostatistics and nutritional sciences at the University of Arizona. “It completely ties our hands and just leaves us with no opportunity to implement reasonable, common-sense public health strategies at the universities.” Thorp reiterated this sentiment:

When Arizona State University (ASU) tried to require that unvaccinated students would have to wear masks and be tested regularly, the governor issued an executive order banning any such expectation. The order says that ASU and other public colleges in Arizona cannot “place any conditions on attendance or participation in classes or academic activities, including but not limited to mandatory testing and mandatory mask usage.” ASU has about 75,000 students across its campuses. What could go wrong?

Officials at universities and in government need to take a stand regardless of the political consequences for the institutions. Lives are at stake.

Such vaccination requirements serve to protect the campus against disease outbreaks, and the mutation of diseases like the coronavirus Delta variant. This should not be a political fault line. Universities should put the health of their students before the opinions of state legislators motivated by petty political ambitions.