If you’re a registered nurse or an EMT, Fox News has a job for you! The conservative network’s Washington bureau is apparently seeking to hire COVID swabbers on a full- and part-time basis starting later this month.

Per a recruiting email obtained by The Bulwark, the swabbers would start next week, on October 13. The job is “projected to be an indefinite/long-term assignment with recent policies that have been put in place regarding employee vaccinations/COVID testing. Likely 12+ months.”

Registered nurses can expect to earn $50 an hour, while EMTs would make $30, working afternoon/evening shifts, and/or morning shifts on weekends. A nurse hired for this job could theoretically make over $110,000 before taxes if he or she worked every afternoon/evening weekday shift for a full year.

The recruiting email was apparently sent to medical health professionals from a recruiter at MedixTeam.com. I reached out to MedixTeam and Fox News to comment on the email but have received no response by phone or email. (NOTE: See update below.)

Fox, which has routinely promoted vaccination misinformation and become the cable news home of skeptics like Alex Berenson, who was recently banned from Twitter, requires its employees to be vaccinated or be tested daily.

The description of the job posting says that applicants must be fully vaccinated. Ironic, I know. But the responsibility of the job, which includes on-site provided Personal Protective Equipment is to:

Fox has danced around its vaccine skepticism with a PSA, but apparently that hasn’t been enough to sway its own employees to get vaccinated. Apparently there are a lot of people at Fox News—an estimated 40 to 60—who would rather get a nasal swab every work shift for months instead of getting just one or two shots.

Which, understandably, makes them sound crazy. And it makes Fox look crazy to pay people up to six-figure salaries to accommodate it.

Read the whole email below. 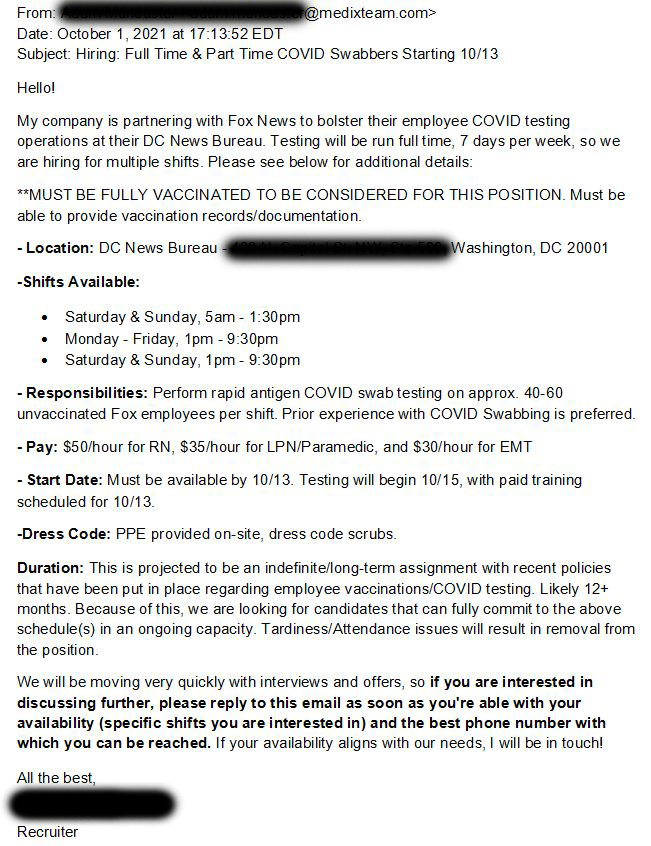 (UPDATE: After this piece was published, a Fox spokesperson pointed us this memo from mid-September asserting that 90 percent of Fox Corporation employees had been vaccinated. However, the Fox Corporation includes several properties other than the Fox News Channel, and so the memo tells us nothing about what percentage of employees at Fox News has been vaccinated. Nor does it tells us anything about what percentage of employees in the Washington bureau is represented by the 40 to 60 unvaccinated employees there.) 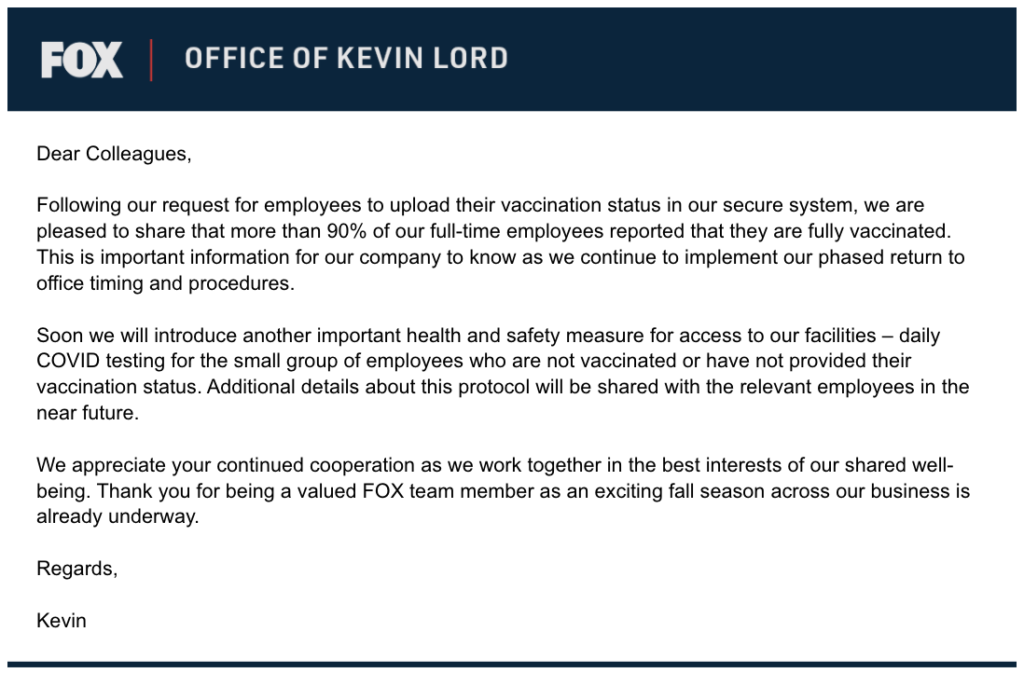