When the international community went one way, Sweden opted for a different track.
by Robert Sutton and Howard Forman
The Swedish and EU flags fly in front of the Swedish Parliament on April 16, 2020 in Stockholm, during the coronavirus COVID-19 pandemic. - Sweden's parliament passed a new law granting the government temporary powers to quickly adopt measures aimed at curbing the spread of the new coronavirus without prior parliamentary approval. (Photo by Jonathan NACKSTRAND / AFP) (Photo by JONATHAN NACKSTRAND/AFP via Getty Images)
Share on Facebook Share on Twitter Share via email Print

A speeding train is heading towards five people tied up further down the track. You have the option to pull a lever, and direct the train onto a different track, and away from the five people. The other track has one person tied to it. Do you pull the lever?

The Trolley problem is a well-known thought experiment highlighting the difference between two moral architectures: utilitarianism and deontology. Does the morality of our decisions depend on outcomes or actions? Does our calculus of saving four lives justify our decision to actively sacrifice the unfortunate individual on the other track?

This thought experiment has parallels in a real-life experiment Sweden is conducting with its 10 million citizens. Though a majority of nations have opted to pull the lever and shift tracks to a lockdown strategy, thereby sacrificing economic growth, Sweden has continued on the same line.

Swedish primary schools, gyms, bars, malls, and restaurants remained open as the country’s government pursued an end goal of “herd immunity.” The thinking went that if enough young, healthy people—who would likely shake off an infection easily—contracted COVID-19 and acquired immunity, they might slow transmission sufficiently to protect more vulnerable Swedes. And thus the pool of people who could spread the disease would shrink. Or so the theory goes.

In Sweden’s case, unlike the Trolley problem, there is no easy way to tabulate whether or not, in the long run, more lives are being saved, or lost, by their choice of inaction. In part this is because we simply do not know enough about the coronavirus to even have a sense of what percentage of the population would need to be exposed in order to achieve herd immunity. Instead, the Swedish government’s decision not to pull the lever and pursue a low-death approach has taken them into a tunnel.

From inside this tunnel we do not know how many people are now tied to the track. We do not know how far the line runs. Or even what the final destination looks like. Sweden’s strategic inaction was predicated on the hope that they might save lives in future by taking risks now and avoiding a shutdown.

That’s a large gamble based on very little scientific understanding.

Contrary to the popular understanding, Sweden has not done nothing. Social distancing is in place, people are to work from home where possible and to isolate when even mildly symptomatic. Steps have been taken to shield vulnerable citizens—though with deaths soaring in care homes, their effectiveness has evidently been limited.

Advocates of Sweden’s approach claim that the average mortality across its population is lower than some countries which aggressively pursued a lockdown strategy. WHO mortality data shows Italy, the United Kingdom, Spain and the United States all have higher death rates, despite having imposed significant mitigation and suppression protocols.

These countries ground their economies to a halt and put considerable emotional and financial strain on their citizens. Yet, by traditional metrics of deaths/capita, cases/capita, or even crude case fatality rate, they ended up seemingly in a worse position than Sweden, where bars remain open and coffee culture is booming.

But COVID-19 may be here for months or years, and the concept of herd immunity relies on us having a solid understanding of the virus. A strategy should be based on a broad empirically derived consensus which takes into account both what we know, and what we do not.

Even more bracing: We are unlikely to find definitive answers to these questions in the near future.

One of the key perceived advantages of Sweden’s approach was the expected reduction in economic damage. But Sweden’s economy is projected to contract by 7 percent to 10 percent of GDP this year, only slightly better than its Nordic neighbors who shut down their societies and have far less morbidity and mortality (Finland and Denmark have less than half the crude Case Fatality Rate (cCFR), between 40 percent and 65 percent of the cases detected per capita, and between 15 percent and 25 percent of the deaths per capita). Swedish unemployment could reach 10 percent in the coming months.

All of that said, it is unlikely that we’ll be able to say definitively whether or not Sweden’s choice was optimal any time soon. Even comparing key metrics like cases and deaths between countries is difficult because of methodological differences in collecting data. When we consider economic damages, long-term sequelae of infection and the differential impact across marginalized groups, direct comparisons becomes extremely challenging.

The trick of the Trolley problem, of course, is that sometimes there are no good decisions; only less bad ones. Sweden may be on the road to herd immunity but even if they are in fact on the path, the road is neither swift nor smooth. And it is littered with friends and relatives.

Let’s hope their deaths were not in vain.

Robert Sutton (@DrRobSutton) is a recent graduate of the University of Oxford Medical School preparing to start work as a junior doctor in Wales. Howard Forman (@thehowie) is a professor of Public Health, Management, Economics, and Radiology at Yale University.

How COVID-19 Doubles Down on Poor Kids 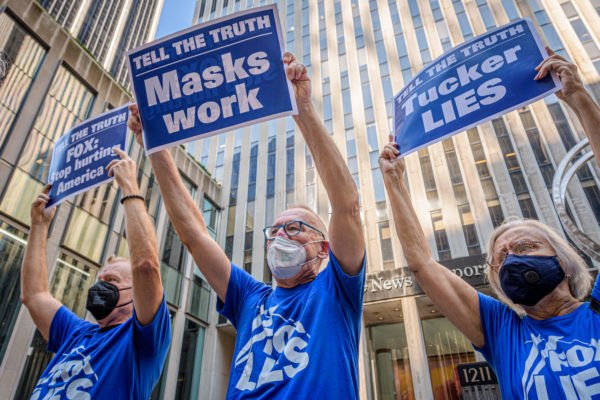 The Anti-Vax Ethos of ‘Live and Let Die’