Ben Sasse is retiring from the Senate at the youthful age of 50. We know why. Politicians who thought they could wait out Trump now see the writing on the wall.

For years we watched the GOP defenestrations: Will Hurd, Jeff Flake, George W. Bush, the memory of John McCain, Paul Ryan, Liz Cheney, Adam Kinzinger, and any other Republican who stood up to Donald Trump—or even just opposed Trump’s attempted coup. Some fell on their swords. Some were tossed aside involuntarily. The result was the same.

Simultaneously, we watched the progress on the other side of the spectrum as normie Republican moderates such as Lindsey Graham, Kevin McCarthy, Elise Stefanik, Ronna Romney McDaniel, and J.D. Vance became unquestioning Trump maximalists.

What these two dynamics proved was a simple fact: In the Republican party as it is currently constituted, political power emanates completely and totally from Donald Trump.

With vanishingly few exceptions, a Republican cannot be openly opposed to Trump on any grounds—even on simple matters of fact, such as who won the 2020 election—and retain political power. Some especially skillful Republicans have managed to advance by being generally positive, but largely silent, about some aspects of Trump. But the Republicans who have advanced most are those who broadcast, in the most vehement and submissive modes possible, their total subservience—not just to the MAGA agenda, but to Trump the man. In all policies, ideas, facts, and forms.

The end result of this truth is that it has driven the Good Republican—that rare animal who was supposed to be the post-Trump future of the GOP—to near extinction.

For a while, Florida Governor Ron DeSantis was supposed to be the Good Republican: a fusion candidate and progenitor of the post-Trump future. Now it turns out that he is a despicable human being, a performative culture warrior who uses the levers of government against companies who engage in speech he doesn’t like and treats refugees as pawns in his political troll game. He keeps a keyboard-warrior press secretary who screams “groomer” at anyone who disagrees with her boss. Oh, and he’s campaigning for Pennsylvania gubernatorial candidate Doug Mastriano, a committed election denier who not only attended January 6th, but bussed others there as well.

So: Not a Good Republican.

But he’s not the only disappointment.

The vast majority of the 2022 Republican nominees this cycle have echoed Trump’s lies about the 2020 election. Many refuse to say if they will certify results they do not like in future elections. Which is extremely bad, but they’re the Trumpy Republicans. We expect that.

What many of us did not expect was that Team Normal would be so happy to support these maniacs.

Just look at the Good Republican governors (several of whom I’ve been championing for years): Chris Sununu, Doug Ducey, Brian Kemp, and Glenn Youngkin. None of them were overtly opposed to Donald Trump. But they didn’t jump on the election denial bandwagon and, for the most part, still sounded like the decent conservatives of yore—just with an extra side of red meat.

But now every single one of them is campaigning either for or with an election-denying lunatic. Ducey, along with the Republican Governors Association, has thrown in with Kari Lake. Sununu has embraced election conspiracist Don Bolduc in New Hampshire. Kemp is campaigning with the pro-coup GOP nominee for lieutenant governor and supporting the supremely unqualified and scandal-ridden Herschel Walker.

“But they have to,” you say. “What are they supposed to do? Not support the other Republicans on the ticket?” That’s my point. To be a Republican in good standing today, you have to make a devil’s bargain.

And Glenn Youngkin? Holy crap. He’s the term-limited governor of Virginia. There’s zero reason for him to be in Arizona stumping for the BDE candidate who wants to jail her political opponents.

Except that there’s a very good reason: Glenn Youngkin isn’t campaigning to help Kari Lake. It’s the opposite. He’s trying to hug Lake in the hopes that her radioactive Trump energy will contaminate him. Youngkin is trying to make up for having been a Good Republican. Because he realizes that’s a dead end.

So what happened? What was the extinction event for Good Republicans? Ultimately, it’s the end-stage of what I call the Republican Triangle of Doom™: The toxic and symbiotic relationship between GOP voters, GOP elected officials, and the right-wing infotainment media. 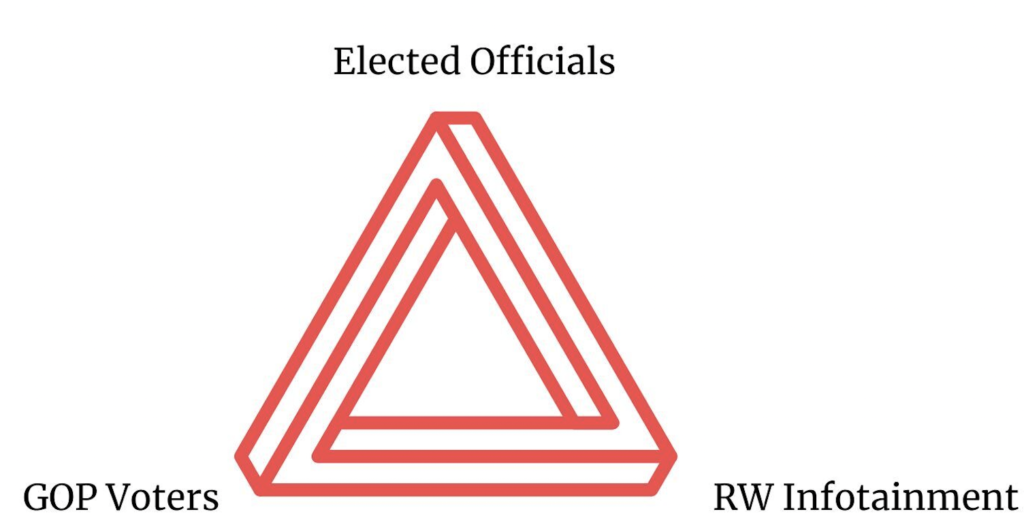 It works like this: Hardcore base voters want to watch media that confirms all their priors and then some. —> So fringe media outlets get traction with Republican audiences. —> GOP politicians need to go on these media outlets in order to reach base voters. —> The more politicians go on these fringe shows, the more mainstream these outlets become. —> Which creates competition for right-wing news outlets that are one standard deviation more sane, forcing those media outlets to get crazier just to stay on par.

Over time, the whole mutually reinforcing, mutually radicalizing process creates the conditions necessary for 70 percent of the Republican party to sincerely believe that Joe Biden is an illegitimate president due to a rigged election. It’s hard to blame voters for believing a lie when every politician they see and media personality they trust is repeating it.

Normal GOP politicians who don’t want to swim in the right-wing infotainment cesspool are deemed traitors for throwing in with the “corporate media” and so lose credibility with GOP audiences. Which makes it virtually impossible for them to have a future in the Republican party.

Even those who are relatively adept at straddling the line, like Sununu and Kemp, aren’t likely to have national futures, despite being popular governors in purple states.

Which brings us to the central flaw in the thinking of the post-Trump wishcasters.

They contend that people opposed to Trump need to cut Ron DeSantis and Glenn Youngkin some slack for campaigning with election-denying conspiracists like Doug Mastriano and Kari Lake. Without these accommodations, the argument goes, you can never elect a Republican who can incrementally walk the party back to sanity.

But The Republican Triangle of Doom™ runs in the other direction. And the reality is that these supposedly Good Republicans aren’t going to drag the party toward them. They’re the ones who are going to move. After all, the hard-right MAGA types aren’t the ones compromising.

And that’s the choice for the remaining Good Republicans. You can play ball with the base, with Trump, with Bannon, with Lake, with your new lunatic colleagues.

Either way, you can’t ignore the truth: The Good Republicans are gone. Probably for good. 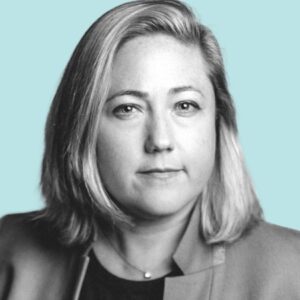 How the Freedom Caucus Hopes to Defund the Police

What the ‘Weaponization’ Committee Is Really After