Tim Miller: We’ve entered the Kevin’s Chaos Congress era. Does that mean funding for Ukraine is on the chopping block?

Jody Trautwein: That would—that would be bad.

Miller: This is “Not My Party,” brought to you by The Bulwark. After fifteen rounds of madness, Kevin finally got his precious gavel.

Bilbo Baggins (Ian Holm in The Fellowship of the Ring): My precious.

Miller: But the big question for 2023 is whether his Chaos Congress will be able to act in the event of crisis, or continuously devolve into gridlock and dad fights.

Randy Marsh (from South Park): I didn’t hear no bell.

Miller: Nowhere are the stakes higher than the war in Ukraine. We are now nearly a year into Russia’s unlawful, incompetent, and evil invasion of their sovereign neighbor.

Agent H (Chris Hemsworth in Men in Black: International): What a bunch of dicks.

Miller: Our aid to Ukraine has been critical to protect our ally and prevent future incursions from Russia.

Volodymyr Zelensky: Your money is not charity. It’s an investment in the global security and democracy that we handle in the most responsible way.

Miller: Over the past year, we’ve provided assistance in four installments. Most recently, $45 billion in the omnibus appropriations bill that was passed in December before Republicans took over the House.

Abe Simpson (from The Simpsons): It was an investment.

Miller: Now, most of our aid is weaponry, much of which is manufactured here, providing domestic benefits. The most recent addition are these badass Bradley Fighting Vehicles that real-life General Mark Hertling wrote in The Bulwark are critical for Ukraine to take back territory (even if keyboard general Elon Musk doesn’t quite get it).

Miller: But such disbursements are no longer a slam dunk. While some Republicans are stalwart in their support of Ukraine, an increasing number of MAGA nationalist nihilists want to block any new spending.

Miller: Here’s a taste. The new speaker said there will be—

Miller: Nine Republicans cosponsored a bill in the last Congress that would bar any new funding from Ukraine until a border wall was built here. Which is kinda weird cuz I thought Trump said he did that already.

Miller: Two congressmen who opposed McCarthy in the first thirteen rounds of the speakers vote asked for rules changes to debate that last $45 billion in aid from December, which 57 Republicans voted against. Forget sending more. One of the hostage demands for McCarthy to get his gavel was to debate clawing back sending some of the money we already promised.

Mr. Krabs (from SpongeBob SquarePants): So here’s the rub.

Miller: Even though a majority of Congress supports continued funding, the rules McCarthy agreed to give a ton of power to a minority within his own party.

Eric Cartman (from South Park): What could possibly go wrong?

Miller: That agreement included budget rules with mandatory cuts, including to defense, and most critically, a new rule that would allow one member to call for a vote to remove him as speaker if they’re upset.

Miller: Let’s think about a hypothetical about how that might work in practice. The current round of Ukraine funding expires in September. There aren’t even close to 218 Republicans who would vote to continue it; there’s maybe 100 or 125 who could be counted on. So come fall, Kevin will have three options: (1) block a vote on new funds, (2) cut a deal with Democrats to get it through, or (3) win over the MAGAs. Option (1) is awful for Ukraine but potentially easy for Kevin. Option (2) means the same MAGAs who just made his life hell could remove him as speaker if he cut a deal with Democrats they didn’t like. Option (3), well, I don’t think that’s gonna happen.

Tucker Carlson: The president of Ukraine arrived at the White House dressed like the manager of a strip club and started to demand money.

Kent Brockman (from The Simpsons): America’s priorities are a joke.

Tony Soprano (James Gandolfini on The Sopranos): This is no f***in’ joke.

Walter Abundas (Richard Jenkins in The Man Who Wasn’t There): Taking it seriously.

Miller: Which path do you think Kevin will take? Cuz I’m worried it’s door number one. We are truly in the upside down when the party that stood up to the evil empire during the Cold War could turn into the Western world’s weak link when it comes to defeating the KGB imperialists today—

Stewie Griffin (from Family Guy): You are the weakest link. Goodbye.

Miller: —all while Democrats are united in their vote to fund America’s most significant military engagement since the war on terror. Even her.

Miller: But hey, time and again in this war, we’ve come to expect the unexpected, and as President Zelensky said—

Miller: See you next week for more “Not My Party.” 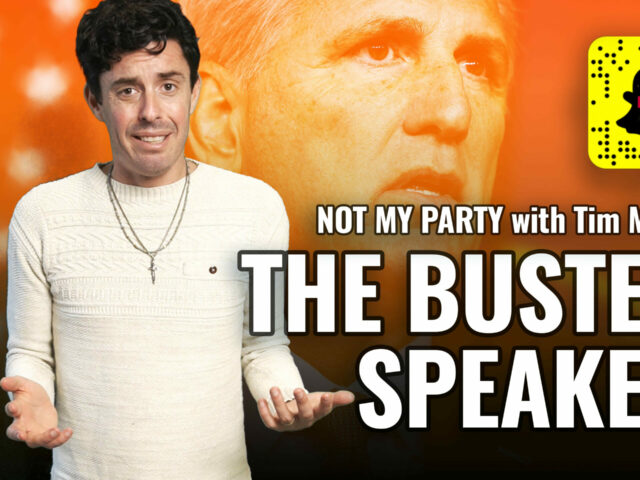