In the annals of successful political extortions, few rival the one that took place in Munich more than 80 years ago.

On September 29, 1938, two days before a deadline that Hitler had announced for invading Czechoslovakia, British Prime Minister Neville Chamberlain yielded and agreed to meet with the German chancellor. In the Bavarian capital, they signed a “nonaggression” pact that ceded the territory to Hitler without consulting the Czechs.

Former President Donald J. Trump is mimicking Munich by leveraging claims to things that aren’t his (America’s national secrets) against something which does not belong to him (the public order, which he threatens to overturn).

On October 8, the New York Times’ Maggie Haberman and Michael Schmidt reported that in 2021, Trump sought to negotiate a deal with the National Archives by which he would return presidential documents (including some marked “top secret”) that he had spirited away to his beachfront resort at Mar-a-Lago. But Trump would only do so in exchange for the Archives giving him other government documents which he hoped to use to rewrite the history of his initial accession to the presidency in 2016.

Neither the documents he had stashed at his resort nor those he sought from the Archives belong to him.

The government materials he wanted were ones that he evidently failed to steal, but thought would serve his purposes. They were documents that he supposed would help clear him from suspicions still lingering from the Mueller investigation into his 2016 campaign’s involvement with Russia, suspicions he believed cast a public cloud over the legitimacy of his term in the White House.

What kind of leader or former leader seeks to exploit his place in the world and his power by leveraging assets that belong to the nation, not to him?

In Act II, Scene 2 of Julius Caesar, Brutus offered one answer: “Th’ abuse of greatness is when it disjoins remorse from power.” (“Remorse” in Elizabethan times meant “conscience” or “compassion.”)

Those qualities of character are lacking in the extreme narcissist: One who thinks that everything exists to serve his purposes. Such as America’s would-be caesar.

Experts who study disordered personalities understand that narcissists are pure transactionalists. The questions for them are not “What can make things better?” Or “What is fair?” But rather, “What’s in it for me?” As psychologists have written, “The life of other people is organized, controlled and bullied around the importance of the narcissist.”

For such disordered individuals, other people, other hearts, other interests do not exist. Nor is there any such thing as an asset that does not belong to the narcissist for purposes of trading so as to advance their own person.

We’ve long seen this pattern in Trump. He was impeached for it (the first time) in December 2019, for his effort to exploit the power he had seized by becoming president. In his “perfect call” to Ukrainian President Volodymyr Zelensky, Trump threatened to withhold from Ukraine hundreds of millions of dollars of congressionally-authorized military assistance unless Zelensky announced an investigation of Trump’s election rival, Joe Biden, and his son, Hunter.

Michael Cohen, Trump’s long-time attorney and fixer, offers a plausible explanation for Trump’s thought process regarding the documents he stole: that Trump anticipated being indicted; hence, he stole some of the country’s most closely guarded secrets, including secrets whose exposure to our adversaries could have significant consequences, as a “get out of jail” free card. (Virginia Senator Tim Kaine has proposed the same possible explanation.)

With Trump, this explanation is entirely plausible because it fits neatly with his existing, decades-long pattern of behavior.

According to the Department of Justice, Trump continues to hold the government’s classified documents in other locations. And we know that the court-authorized search of Mar-a-Lago revealed empty folders with markings such as “top secret.” Is it out of the realm of possibility that, should Donald Trump be held to account in the criminal courts, he might seek to bargain for his freedom with our country’s secrets, our nation’s security, and the lives of those who guard both?

Maybe a better question is: What in Donald Trump’s history could lead anyone to believe that he wouldn’t attempt such a gambit?

And even if these documents fail to work as a get out of jail free card, Trump has another card to play. He could call on his waiting army of supporters to threaten more violence on the public order. He has done this—and carried out such a threat—before. And he has already said, plainly, that he might do so again.

Those in charge of prosecuting the former president should keep in mind history’s clearest example of everything wrong with appeasing a narcissist: the calamity of Munich. 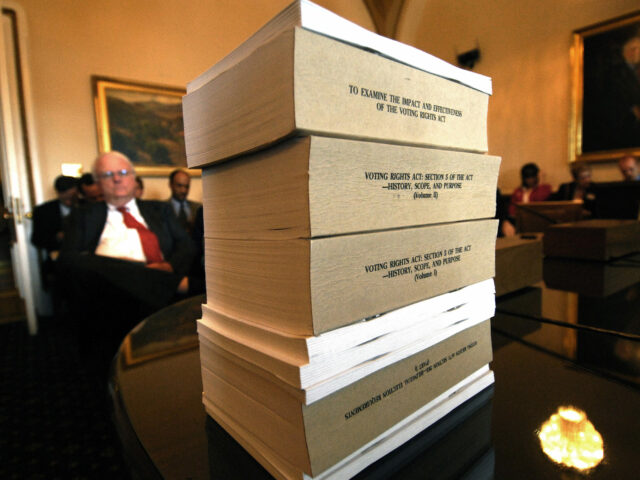 What’s Ahead for the Voting Rights Act?