On Saturday, Donald Trump did not merely bet the farm on being elected president in 2024. He bet Trump Tower, Mar-a-Lago, Bedminster, the golf links at Aberdeen, and the private jet, too. In a single social media post, he put his ability to defend against an indictment in even greater jeopardy than it already was.

On Truth Social, he called for the overthrow of the American government—specifically, “for the termination of all rules, regulations, and articles, even those found in the Constitution” in order to “declare the RIGHTFUL WINNER” from 2020 or “have a NEW ELECTION”: 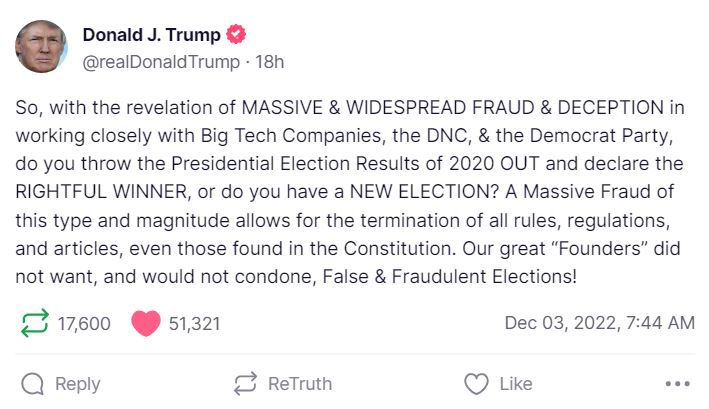 Trump writing that we should cancel the Constitution ranks right up alongside John Tyler’s support of the Confederacy as among the most shameful acts of a former president in our nation’s history.

Trump was not just saying the quiet part of his entire political career out loud. He was screaming it straight into our eardrums.

His disordered mind can only be thinking one thing: By racing far past the edge of the known political universe, he wins the gold medal in the extremism that the MAGA base craves. No rival can compete. He figures that’s how to guarantee his nomination and eventually the presidency, with its immunity from indictment.

Out of his gourd with fear of federal prosecution, Trump does something that helps ensure its success.

Think about four key crimes with which prosecutors could charge Trump for his role in trying to overturn the 2020 election and in fomenting the violent January 6th siege of the Capitol.

First, seditious conspiracy, the subject of the Justice Department’s landmark conviction of two Oath Keepers last week. A prosecutor can prove the crime by showing an agreement between two people “to overthrow . . . by force the Government of the United States.”

Suppose you’re Special Counsel Jack Smith. If your target openly calls for the termination of the instrument that establishes the federal government, you’re a good way closer to proving his readiness to overthrow it than you were the day before he made his statement.

As part of the charge, suppose prosecutors are trying to show that a core component of Trump’s sedition was to stop one of the defining political traditions of our republic—the peaceful transition of presidential power. Then one day, Trump says, We need the Constitution terminated so we can undo the transition that happened. That would bring prosecutors so close to home they could smell bread baking in the oven.

Second, take the crime of insurrection. Under federal law, it is punishable by a fine, up to ten years in prison, and permanent disqualification from “any office under the United States.” While the law does not clearly define insurrection, a historically informed and common-sense interpretation of the term would suggest that prosecutors would have to prove that the target intended an “act or instance of revolting against civil authority or an established government.” For that, there’s not much better evidence than him calling for abolishing the document on which the established government’s authority rests.

Third, should Smith aim to charge Trump with obstructing an official proceeding—the joint session of Congress on January 6th to certify President Biden’s election—prosecutors would need to show that Trump did not want that certification to occur. His post stating that it never should have happened and should still, two years later, be overturned seems like it would be of some use.

Fourth, there’s the potential charge of conspiracy to defraud the United States. It is proven by an agreement aimed at interfering with the government’s lawful functions; in this case, the function of certifying the election. Again, it sure helps to prove that aim if your target is outspoken about his continuing desire to have the certification nullified.

Safe to say that Trump’s criminal lawyers will be doubling down on the Xanax after Saturday’s social media post. He just did enough damage to his defense that one might even infer that he doesn’t believe it’s likely to work—that, to the extent he’s thinking this through at all, he thinks something like Why not take extreme measures to regain the protection of the presidency? Even if I hand my jailers another padlock, I can cut it when I’m back in the Oval Office.