Keep up with your favorite Bulwark writers—sign up for a FREE daily dose of sanity emailed right to your inbox. Sign up here.
Support The Bulwark and subscribe today.
Join Now
Trumpism Corrupts

In her new memoir, the pollster turned Trump adviser dings her former colleagues—and her husband.
by Gabriel Schoenfeld
Kellyanne Conway, counselor to US President Donald Trump, speaks to the press at the White House in Washington, DC, on January 16, 2020. (Photo by NICHOLAS KAMM / AFP) (Photo by NICHOLAS KAMM/AFP via Getty Images)
Share on Facebook Share on Twitter Share via email Print

I picked up Kellyanne Conway’s new memoir, Here’s the Deal, with a mixture of trepidation and nausea. Watching her put lipstick on a pig for five years—first as Donald Trump’s campaign manager in 2016, and then for nearly four years as his high-ranking White House adviser—left me doubting that there would be anything good to say about the woman. But now that I have read nearly five hundred autobiographical Kellyanne Conway pages, have I changed my mind? Does she have as noxious a persona as it seems?

Kellyanne née Fitzpatrick begins her memoir conventionally enough, recounting her early family life. From the small town of Atco, New Jersey, and the product of a broken home, Kellyanne was a riser and a striver from the first. Valedictorian in 1985 from St. Joseph’s High School, on to Trinity College, a stint as a volunteer for Jack Kemp’s short-lived 1987 bid for the presidency, and then law school, along the way she fell in with Ronald Reagan’s pollster, Dick Wirthlin, as mentor. By age 28, she had her own polling firm. In no time at all, Kellyanne—a hyper-glib talker whom Trump has characterized as having a “mouth like an effin’ machine gun”—became a staple on CNN, which was a boost, as she writes in her memoir, to both her ego and her business.

Set up with George Conway by her good friend Ann Coulter, and following an elaborate courtship, Kellyanne married the high-powered conservative attorney in an April 2001 wedding where, as she recounts here in inordinate detail, caviar, escargot, Alaskan king crab legs, sea bass, filet mignon, and a Viennese dessert selection were on the menu. Following a honeymoon, the happy couple moved into the “super-luxurious and super-tall” Trump World Tower in New York, where “our new neighbors included Bill Gates, Sophia Loren, and Naomi Campbell.”

Kellyanne moved around in right-wing circles, and during the Obama years she circulated with figures like Steve Bannon and became close to the far-right donor Rebekah Mercer. A revolt on the Trump World Tower condominium board brought the Conways into personal contact with Trump himself, and on his side in the dispute, forging a relationship. Contemplating entering the New York gubernatorial race, Trump sought out Kellyanne’s advice. In the end, Trump demurred on the run. He had his eyes on a bigger prize.

When the 2015 presidential campaign season opened, Trump attempted to recruit Kellyanne for his fledgling campaign, but she chose to work for a Ted Cruz super PAC, a perch from which she skillfully bashed the rising Trump in numerous television appearances. But by May 2016, Cruz was defeated and the Republican nomination was effectively in Trump’s hands, and on July 1, 2016, Kellyanne started working for the man she had been denigrating. Six weeks after she began, the ethically challenged (soon to be felonious) campaign chairman Paul Manafort was out the door of Trump Tower and Kellyanne was installed in his place.

On October 7, 2016, just one month before Election Day, the Trump campaign struck an iceberg, and Kellyanne Conway had to navigate the “grab ’em by the p%$#y” Access Hollywood tape. Kellyanne spins it here as artfully as she did on the campaign trail.

Those of us closest to him, literally at that moment, were in a state of disbelief. . . . The words spilling forth on the eleven-year-old tape were vulgar and vile. I certainly couldn’t square them with the brilliant, fun-loving, respectful man who had been the first Republican to elevate a woman to the top spot of his campaign.

Brilliant? Respectful? Whatever one makes of Trump’s intelligence and character, he went on to victory. In short order, Kellyanne found herself in the White House with walk-in-to-the-Oval-Office privileges as “counselor to the president.” 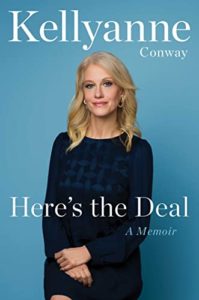 Three-and-a-half years of public service ensued, if public service is what we can call her relentless spinning. The memoir traipses through some—but by no means all—of the incidents and controversies that enveloped the Trump presidency. The Mueller investigation she dismisses as “political proctology.” Of the administration’s “zero-tolerance” policy for illegal immigrants, she writes unconvincingly: “The policy itself did not separate parents and children, but the result of applying the policy in some instances did.” A distinction without a difference. Of Trump’s disastrous handling of COVID, in particular, his lying about what he knew about the seriousness of the disease and his continual undermining of public health guidelines, she says not a word.

Kellyanne also walks readers through the infighting that plagued the White House staff. A particular target of her ire is Jared Kushner, Trump’s son-in-law, who comes across as out of his depth—“part dreamer, part schemer”—yet invested with enormous power. But we are also introduced to “a preternaturally paranoid” Reince Priebus, Trump’s first chief of staff. We encounter Steve Bannon, then a ranking White House official, leaking incessantly and “busy buffing his image in the media, sowing discord among other staffers, and undermining his rivals (real and imagined).” Ivanka, the president’s posturing daughter, we’re told, like her father, is “brilliant.” From the evidence presented in this memoir, one can fairly question the proposition that Trump hired only the very best.

A major focus of the memoir is the curious case of Kellyanne’s husband. George Conway, as the entire sentient world knows, started out as an ardent Trump supporter, going so far as to seek (unsuccessfully) a high-ranking position in the Justice Department. But as events unfolded, he had a radical change of mind. Even as his wife was working to burnish Trump’s image, George had taken to the media, especially to Twitter, to tear it down, calling the administration, among other things, “a shit show in a dumpster fire.”

Pages upon pages are devoted to what Kellyanne calls George’s “small insolent strikes,” which she labors to explain, even to herself. “Clearly,” she writes, “he was cheating by tweeting. I was having a hard time competing with his new fling.” More: “I had two men in my life. One was my husband. One was my boss, who happened to be president of the United States. One of those men was defending me. And it wasn’t George Conway. It was Donald Trump.” It is more than passing strange that, even as she bemoans her loss of personal privacy, she carries on about her husband’s supposed betrayal in such a public way. Something is askew.

“I love Donald Trump,” Kellyanne states baldly at one juncture. Love is blinding, as they say, if her feelings for Trump are indeed love, not something uttered to position herself for some ingratiating purpose. Whatever her true sentiments, the picture of Trump that emerges from the memoir is preposterous. She finds Trump’s halting bumbling reading off the teleprompter “eloquent.” “I will always tell you the truth,” is how, without comment, she quotes Trump—never mind his prodigious ability to tell multiple lies in one breath.

Kellyanne has her own challenges in this realm. As Margaret Sullivan has put it in the Washington Post, “Perhaps more than any other Trump official, she has undermined the entire notion that truthful information should be expected from the White House and that public officials at the highest level should be held accountable for their words and deeds.” Is it rose-colored glasses or complete cynicism that leads Kellyanne to call this brutish ignoramus of a man “respectful” and “brilliant”? I would vote for cynicism. On the evidence presented in this volume, and from five years in the public eye, it is difficult to escape the judgment that when it comes to character, Kellyanne Conway has a great deal in common with the “vulgar and vile” guttersnipe whom she so loyally served.