In the words of Ernie McCracken, Kari Lake was on a gravy train with biscuit wheels.

In the days leading up to the November election, the former Phoenix television news anchor—having cruised to the GOP nomination for governor of Arizona on an unapologetic campaign of rejecting Donald Trump’s 2020 defeat and escalating the culture wars—was already being groomed for higher office.

National Review editor-in-chief Rich Lowry declared that after her “more likely than not” victory over Katie Hobbs, Lake “would have to be considered the favorite to become Donald Trump’s vice presidential pick should he win the Republican nomination again in 2024.”

Noting that “candidate quality matters,” Lowry explained that “you can peddle conspiracy theories about the 2020 election and achieve liftoff if you are an exceptionally poised former news anchor.”

But it wasn’t simple professional courtesy that sent these “mainstream” politicians to Arizona to stump for Lake. You didn’t see Asa Hutchinson of Arkansas, Mike DeWine of Ohio or Georgia’s Brian Kemp rallying in Scottsdale to announce that Kari Lake was “awesome.”

Lake’s endorsers made a deliberate choice and were united behind a common strategy: to team up with the far-right faction behind Trumpism instead of opposing it or trying to moderate it.

Glenn Youngkin admitted as much, giving himself a wide berth to endorse candidates who don’t accept democratic outcomes at an event in Austin: “I am comfortable supporting Republican candidates . . . And we don’t agree on everything. I mean, I have said that I firmly believe that Joe Biden was elected president.”

Anyway, fast forward to the present day: A defeated Kari Lake steadfastly refuses to concede her loss and seems to be one bad Uber ride away from Loomering herself to the governor’s mansion. 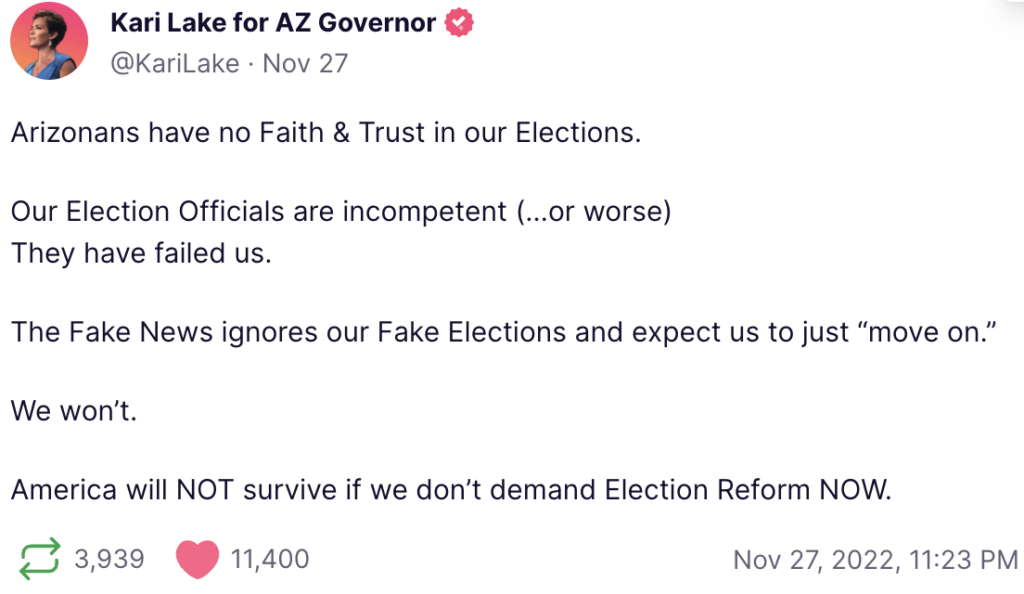 While there may be some lawyering ahead—Lake will reportedly “ask the Maricopa County Superior Court to nullify its election and hold it over again”—most of what’s coming from Team Lake is a familiar mix of disinformation and intimidation.

Her number one fan, former president Donald Trump, demanded simply that “Kari Lake should be installed Governor of Arizona.”

Mark Finchem, the right-wing sheriff and Oath Keeper who was defeated in his bid to run Arizona’s elections, called for a “new election, recall everyone, overwhelm the polls.” Later he warned that “when we hold treason trials never forget who the traitors are.”

Lake’s supporters descended on a public meeting of the Maricopa County Board of Supervisors to threaten officials with execution. As one activist told the county supervisor, “interference in elections in the United States of America is a capital offense, considered treason punishable by the death penalty.” (That same supervisor spent election day in hiding at an undisclosed location “due to threats to his safety, his spokesperson confirmed to CNN.”)

Conservative tastemakers seem to have had enough of their party’s election deniers.

National Review editorialized that “there were legitimate problems in Maricopa County on Election Day, but none that justify overturning the gubernatorial election and none that justify Kari Lake’s refusal to concede.”

Kari Lake is a telegenic fraud theorist straight out of Mar-a-Lago casting, running in a historically red state, in a year with an unpopular Democratic President and 8% inflation. If Ms. Lake couldn’t win on “Stop the Steal” in 2022, it’s hard to see how anyone else can pull it off. Maybe at last the 2020 election is over.

If only. While conservative pundits and operatives may now say that election conspiracism is poison in a general election, those with aspirations of actually leading the Republican party have been much more circumspect.

The Bulwark reached out to three of Lake’s endorsers with national ambition—Florida’s Ron DeSantis, South Dakota’s Kristi Noem, and Virginia’s Glenn Youngkin—with a simple question: “Do you support Kari Lake’s refusal to concede defeat in her race for Arizona governor?”

As of this article’s publication, Governors DeSantis and Noem declined to comment.

When asked on Friday by a local news reporter for Richmond-based WRIC, Governor Youngkin would only go so far as to say that, eventually, people would have to “move on.”

I think what’s gonna become clear is as folks work through the exact same process that we worked through in Virginia is that the elections, once they have been fully counted and reviewed, folks need to go ahead and accept the results and move on with them. And that’s what I think once all this process is complete in Arizona, they will understand that.

When will it be “complete?” You might think that would be pretty close to now since all 15 Arizona counties have certified their results, with official statewide certification expected today.

But that doesn’t seem to be the case.

“By the way,” Youngkin continued, “processes should be checked to make sure they are correct. We did the same thing with post-election audits in Virginia. By the way, Virginia’s elections were fair, they were accurate…”

To summarize: Youngkin issues a vague call for “folks” to “accept the results and move on” at some future date, only after “checking the processes” and completing post-election audits—and if you want to see a fair and accurate election come to Virginia.

Here’s what he doesn’t say: “Kari Lake lost and it’s time for her to concede.”

Compare Youngkin’s Swiss cheese non-answer to what other Republicans have said.

Outgoing Arizona Governor Doug Ducey, despite having endorsed Lake in the general election, congratulated governor-elect Katie Hobbs and released a statement saying “the people of Arizona have spoken, their votes have been counted and we respect their decision.”

Former Arizona Governor Jan Brewer—those who remember the Obama years know she’s no squish—was even more direct in an interview with the New York Times.

Kari Lake has lost the race in my opinion. There’s no way for her to have a pathway. . . . If I was in that position, I probably would concede. Our democracy is so important to what our country and state stands for. We vote people in and we vote people out.

The rise and fall of Kari Lake is in many ways the Trump story in miniature: a television celebrity ignites a right-wing populist movement with a “Big Lie” conspiracy theory—birtherism for Trump, “Stop the Steal” for Lake—in pursuit of political power.

And the broad right-of-center coalition that backed Lake is, in essence, the Trump coalition: a hardcore MAGA contingent that dominates the primary, joined by more traditional strains of free market and cultural conservatism for the general election.

The Trump-Lake analogy extends to enabling their behavior in defeat as well. Despite high-minded calls by some conservative leaders to move on from election conspiracy theories and attacks on democracy, the revealed preference of Republican politicians is to indulge them.

Ben Shapiro put it well in a 2016 piece about Donald Trump and anti-Semitism: “politicians become responsible for movements when they pat those movements on the head.” So it goes for elected Republicans who vouch for enemies of democracy.

“What’s the downside for humoring him for this little bit of time?” a senior Republican official famously asked a few days after the 2020 election. The country got its answer on January 6th, 2021. The Republican party got its own answer this November: the loss of otherwise winnable races.

So what will be the downside for humoring Kari Lake? This is a person who just endorsed Trump’s call to “terminat[e] all rules, regulations, and articles, even those found in the Constitution” and make him president again.

Whatever that downside is, it’s not enough to move her Team Normal supporters to do much of anything in defense of democratic principles. “The downside” is a price the current GOP is willing to pay given their overriding objective: to preserve the alliance between traditional conservatives and a MAGA-fied populist faction.

And think about this: If Republicans such as DeSantis, Youngkin, and Noem aren’t yet willing to cut Kari Lake loose when she can’t even win statewide—for fear of alienating Republican voters—how will they ever do it to Trump?