All Roads Lead to Roads

Charles Marohn calls out the waste and dishonesty at the heart of the traffic engineering profession.
by Addison Del Mastro
A Metro Silver Line bus drives on the 110 Freeway under the Judge Harry Pregerson Interchange with the 105 Freeway during rush hour traffic in Los Angeles, California on July 16, 2021. (Photo by PATRICK T. FALLON/AFP via Getty Images)
Share on Facebook Share on Twitter Share via email Print

“This book is not written in anger,” wrote Peter Blake in the introduction to God’s Own Junkyard, his 1964 fusillade against American suburbia. “It is written in fury.”

Likewise with Charles Marohn and his Confessions of a Recovering Engineer, a takedown of the traffic engineering profession and the received wisdom of America’s transportation experts.

Marohn, founder and president of the urbanist organization Strong Towns, is straightforward and earnest, but occasionally displays wry, dismal humor. “Traffic congestion is not as simple as speed and volume,” he begins, sounding like a policy wonk. This is “obvious to anyone not intellectually limited by the toolbox of standard engineering practice.” In a discussion of dodgy economic forecasting, he writes that a precise but fantastical projection “makes it seem like they know what they are talking about.” He pauses: “They might even believe that they do.” High-speed rail? “I suggest we start by building two places worthy of a high-speed rail connection.”

For Marohn, it all comes down to financial productivity, fiscal responsibility, and return on investment; America’s transportation system, and especially its overengineered and dangerous roads, embody the opposite. Of course the standard engineering analyses are full of numbers, but as Marohn convincingly demonstrates, they are based on models and projections that often depend on flawed assumptions—especially the seductive but faulty assumption that human behavior is static and easily engineered.

Confessions may be a dangerous book. Traffic engineers are cautious and conservative; one would think their received wisdom and accumulated knowledge bears some semblance to reality. But in the middle of a powder-keg cultural moment, where trust in all manner of institutions and experts is at historic lows, Marohn publicly blows up the credibility of this most staid profession. He accuses it of “institutionalized fraud and elaborate self-deception” and of living in a “self-reaffirming echo chamber.” And he does so not as a crank or an interloper, but as an engineer and planner himself.

Perhaps his book will contribute to America’s crisis of public trust. But in this case, a little less public trust could be a good thing—because the designs and plans of the engineering profession, as Marohn demonstrates with somber fury, are killing people all across America every day. 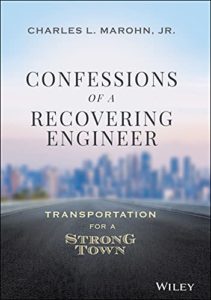 First of all, roads designed to be “safe” are generally designed to be idiot-proof, very forgiving of motorists’ mistakes but not those of other road users. This places non-motorists in unnecessary danger, and puts the onus on them not to be mowed down. But it also induces the very sorts of unsafe driving that it’s supposed to compensate for. “Stroads,” Marohn’s memorable term for road-street hybrids—those ubiquitous wide, high-speed roads with turning lanes, frequent intersections, and lots of commercial property driveways—are complicated, expensive, frustrating, and dangerous. They comply with all the engineering manuals, though. Auto-related fatalities in America are lowest, Marohn points out, in states with the highest proportions of pre-World War II development. “Most people will obey traffic laws,” he writes, “when those laws are in harmony with the design.”

The dangerous, high-speed roads in cities and neighborhoods take most of Marohn’s ire, but he is hardly more bullish on public transit. While crucial to building wealth and enhancing mobility in urban places, transit in most American cities is generally a mere appendage, or “charitable overlay,” on a fundamentally broken auto-oriented development pattern. Transit, as it exists today, is a “lesser partner in an insolvent and immoral system.”

On a somewhat lighter note, he labels the quotidian traffic light “perhaps the most casual waste of time and resources to come out of the profession of civil engineering.” He instead argues for streets that naturally, through design, slow traffic to a point where signaling is unnecessary.

He further argues that traffic congestion, bane of drivers and engineers alike, is not a problem in and of itself. New road capacity, the solution planners ordinarily reach for, merely induces more driving, as well as sparking new peripheral development and stretching out commuting and living patterns even more. “The only way to deal with congestion,” Marohn writes, “is to allow congestion to drive demand for local alternatives to auto trips.” The corollary is taming the streets that have been dangerously expanded to move large volumes of traffic. Pointing to the 2020 spike in crashes and fatalities, he argues that those idiot-proof roads all up to standard are incredibly dangerous; congestion actually masks just how dangerous they are.

How did it get like this? Funding is a big part of the answer. “Cities have allowed themselves to become the de facto implementation branch of state and federal policy,” Marohn writes. Federal and state transportation money creates bad incentives. For example, local streets receiving federal maintenance money must be up to standard, meaning implementing a panoply of complicated, unsafe, and expensive “safety” measures. All sorts of initiatives that should be municipal, from environmental to social justice to public health to job creation, are instead forced into the rubric of transportation by federal and state funding mechanisms.

There are at times echoes of something radical in Marohn’s work and in the Strong Towns philosophy. As mentioned, Marohn embraces traffic congestion. He argues that our cities should be so delightful that there’s no need for cars. He dislikes big-box stores, cul-de-sacs, and peripheral development (though he eschews the term “sprawl”). Occasionally, in other writing from the Strong Towns website though not in Confessions, there’s even a suggestion that households should be productive economic enterprises. (By way of disclosure, I should note that I have written several articles for the Strong Towns website, although I have not worked with Charles Marohn and do not personally know him.)

Does Marohn want to turn America into Europe—or even roll back the global economy? Is it possible to shrink the scale of commerce and development in a rich, globalized world? When urbanists point to classic towns and pre-automobile cities as development models, are they mistaking a vanished economic and social era for an approach to urban planning?

This is all food for thought. But while Marohn is indeed suggesting an alternative system, it isn’t as radical as this. Once you grasp the fundamental radicalism of American postwar planning, you can never look at any of this the same way.

Marohn is sometimes criticized for speaking relatively little about race. It is true that he seems to carefully eschew language that could be characterized, these days, as “woke.” But it is impossible to argue that he does not understand and care deeply about the racial and class inequalities magnified by America’s broken transportation system. Confessions is dedicated to Destiny Gonzalez, a 7-year-old Latina child struck down by an intoxicated motorist on State Street in Springfield, Massachusetts, exquisitely engineered to be dangerous and hostile to pedestrians. Marohn’s chapter on finance centers on the struggling, mostly black Shreveport, Louisiana, neighborhood of Allendale. He demolishes the economic growth projections of a local business association that favors ramming an Interstate extension and the associated big-box development through Allendale. He further argues that Allendale is being targeted not because of any real “development potential,” but because of its poverty and lack of political clout. Whatever wealth it does have, Marohn suggests, will effectively be taken by the state and redistributed to private commercial enterprises.

And in a chapter on routine traffic stops, Marohn points to the injustice of such stops as pretexts, and to the civil liberties nightmare of asset forfeiture, a means by which police generate income by seizing and selling suspects’ private property. Needless to say, these indignities and injustices fall disproportionately on non-white Americans. Marohn adds that while he has gotten his share of tickets, often along rural speed traps where cops lie in wait, he has rarely if ever received a ticket while wearing a tie. Traffic enforcement, he writes, is “arbitrary; a random occurrence that is largely unrelated to safe driving.” The loneliness and physical separation of auto-oriented development, and the constant low-grade rule-breaking our overbuilt roads induce, make it all worse. Marohn concludes, “We must end the routine traffic stop as a law enforcement technique.”

The fact that Marohn never uses trendy “left-wing” language does not detract from his conclusions on matters regarding race. Rather, it magnifies them, making plain to any reader that even when you strip out the jargon, the heartbreaking injustices and inequalities that run through everything in America are not imaginary or ideological. They were not conjured up in coastal newsrooms or Ivy League academic departments. They are real; they are there. Marohn makes it far easier for those of a centrist or right-leaning persuasion to see this, and he forces such readers to reckon with it. He does not allow them to dismiss any of it on the basis of “sounding left-wing.”

Marohn allows himself, in a final heartfelt chapter, to resemble James Howard Kunstler, author of 1993’s anti-sprawl The Geography of Nowhere:

For what particular greatness are we sacrificing our people? The misperception of a few saved seconds? To save ourselves a short walk? For the chance at a drive-through hamburger? This is senseless, beneath any nation that considers itself great.

While Confessions may cause a stir in the engineering profession, it is also an important book for the average American. That isn’t to say it’s an easy read. It is almost impossible to accept the sheer amount of slowly accumulated, hard-earned value that has been vaporized, and the sheer amount of inconvenience and suffering that has been inflicted, especially upon the most vulnerable, by the professions and systems that Marohn methodically exposes. It would be far easier, for those who were able before, to ignore it. If you read Confessions, you’ll no longer be able to.