And Eric Schmitt Is Supposed to Be the Sane One

Missouri Attorney General Eric Schmitt’s Super PAC made its opening gambit in the crowded primary of crazy to replace retiring Sen. Roy Blunt and these ad wizards want to make sure that they stand out in a field of red-hatted reprobates that includes both an ambulance-chasing weapon brandisher and a disgraced sexual assaulter and revenge-porn enthusiast.

The result is a digital video that is practically indistinguishable from a pro-Stop The Steal ad that could’ve run before the January 6th insurrection. Politico’s Alex Isenstadt reported that the Save Missouri Values PAC was putting “five figures” behind this MAGA masterpiece.

The ad begins with a clip of former President Trump saying that “you’re not gonna have a future in 2022 or 2024 if you don’t find out how they cheated” in front of a recent TPUSA rally. It goes forward with Trump reiterating that the election was “rigged” and then highlights Schmitt’s effort to cancel the legal votes of Americans in other states in service of the former president’s coup attempt.

The PAC then highlights Schmitt’s totally-on-the-level lawsuit against China over COVID-19 and quotes Trump at length discussing the “murderers” and “human traffickers’ coming across the border. Here they make the bizarre editorial decision to drive that point home with video of people climbing over what I had been told was an unbreachable fence. 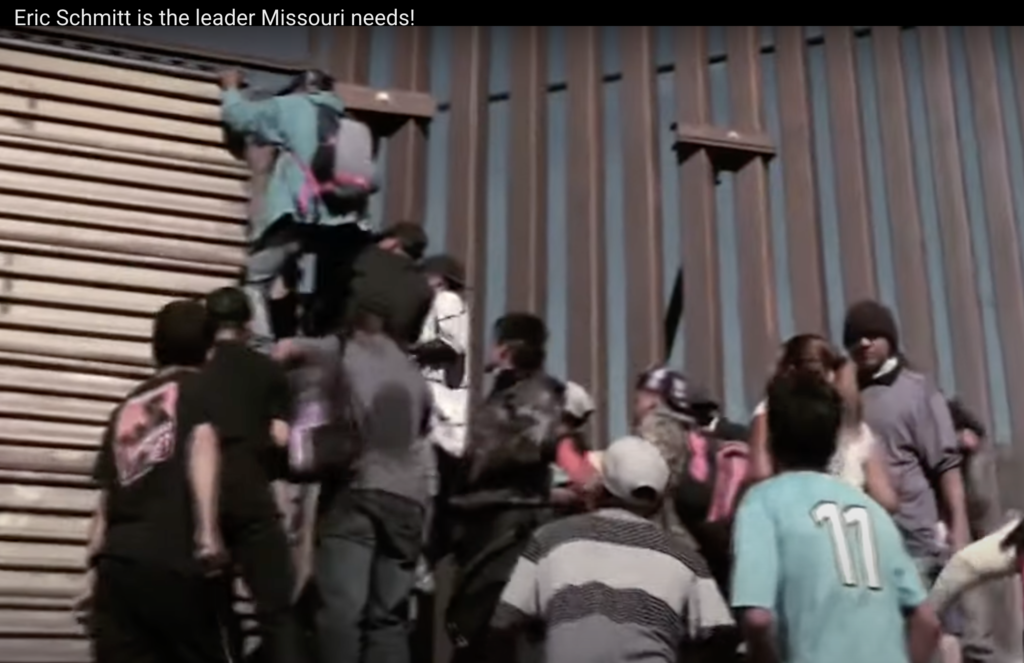 This incongruous argumentation continues with more video of Trump (is this a Trump ad or a Schmitt ad?) discussing the arson and looting that happened on Trump’s watch and then closes with a two-toned Orangina shouting about how we will Make America Great Again again.

Now, sure: A GOP candidate running an ad that is replete with insurrectionist Trump dulia is kind of a dog bites man story, I grant you.

But this highlights just how far down the drain things have gone. Politico, in their effort to create a little both-sides narrative magic, described the Missouri race as a “battle between controversial firebrands and GOP officials.”

In their telling, Schmitt is one of the normie “GOP officials.” So what we have is the supposedly mainstream candidate running the most explicitly pro-coup, Big Lie-advancing ad of the cycle, while the “firebrands” are supposedly . . . even crazier?

How much nuttier can you get than an ad that positions the candidate as OJ on the search for the real vote riggers?