The cost of German dithering over delivery of tanks to Ukraine is measured in lives unnecessarily lost.
by Eric Edelman and David J. Kramer
A Slovakian soldier drives a Bundeswehr Leopard II driving training tank, through the terrain during driving training. (Photo by Philipp Schulze/picture alliance via Getty Images)
Share on Facebook Share on Twitter Share via email Print

Every day that Germany fails to approve or facilitate the transfer of its Leopard tanks to Ukraine is costing Ukrainian lives and risks emboldening the authoritarian Putin regime.

Polish foreign minister Zbigniew Rau put it succinctly when he tweeted: “Arming Ukraine in order to repel the Russian aggression is not some kind of decision-making exercise. Ukrainian blood is shed for real. This is the price of hesitation over Leopard deliveries. We need action, now.”

Germany has produced some 2,300 Leopard 2 tanks, and Ukraine seeks 300 or so of these state-of-the-art machines. The U.K. has said it will send 14 of its Challenger 2 tanks to Ukraine, and France has floated the idea of sending its own Leclerc armored units. But it is the Leopards that comprise the largest inventory among European NATO members and partners and arguably the best and most suitable and sustainable military option in the near term.

Thirteen NATO member (and soon-to-be member) states possess the Leopards, and several—including Poland, Finland, Denmark, and Spain—are prepared to transfer the tanks to Ukraine but need German permission to do so. Given the emergency in Ukraine, Germany should at minimum approve their transfer, as the German foreign minister on Sunday indicated that Berlin would do.

While Germany has provided Ukraine more military aid than any country aside from the United States and Britain, its foot-dragging over the tanks is exposing rifts in an alliance that since last February has shown remarkable unity. This has demoralized Ukrainians who have bravely pushed back against Russian aggression and undercut the initially bold positions German Chancellor Olaf Schulz enunciated in the early stages of Russia’s invasion. Only Russia’s Putin stands to benefit from this situation.

Although tanks are not the highest priority item on Kyiv’s wish list, many analysts believe the Leopard tanks could tip the balance even more in Ukraine’s favor and help it regain control over Russian-occupied territory. That, in turn, would increase Ukraine’s chances of achieving victory over Russia.

Germany worries that providing tanks to Ukraine would lead to an escalation in the war and, in a revival of Ostpolitik thinking, that it could harm the prospect of improved relations with Moscow once the war ends. Berlin initially insisted that it wouldn’t decide on the Leopards unless the United States agreed to send its M1A1 Abrams tanks to Ukraine, too.

The Pentagon hasn’t helped matters by resisting any push to send the Abrams tanks, with Under Secretary of Defense Colin Kahl, among many others, offering a series of excuses including the rate and type of fuel consumed, the expense, the extensive training required, and the difficulty of maintaining and sustaining an Abrams tank force.

Whether such arguments will hold water remains to be seen, given that Egypt, Saudi Arabia, Kuwait, Australia, and Iraq use these tanks. If the Biden administration stays true to form, it may yet conclude that Abrams tanks make sense for Ukraine—and do so sooner rather than later.

Putin has been threatening escalation with almost every step NATO forces have taken in bolstering Ukraine’s defense, but hasn’t followed through once. German concerns that Russia could attack it if Germany provides the Leopards to Ukraine aren’t shared by countries closer geographically to Russia’s mainland. Moreover, such worries ignore the fact that Germany is protected by NATO’s Article 5 security guarantees. In addition, if Putin can’t prevail in Ukraine, the chances of his moving against a NATO member state are close to zero.

It takes time to train Ukrainians to use what for them are new weapons systems. The new German defense minister suggested that such training should begin for the Leopards, a sign that perhaps Germany will agree to do the right thing. But each day of delay is paid for in the lives of Ukrainian soldiers and civilians. The sooner the Ukrainians receive and train on several hundred Leopard tanks, the easier it will be for them to incorporate these new weapons into their arsenal and avoid a mishmash of different tanks with varied training and maintenance regimens.

The United States and other NATO allies have generally done a very good job in supporting Ukraine militarily and through an unprecedented set of sanctions against Putin and Russia, which must continue. But the military support always seems to be a step behind where Ukraine needs it to be, from delays in sending HIMARS and armored vehicles to Patriot air defense systems and now tanks. Ukraine eventually gets much of what it asks for, but it takes too long and comes after more Ukrainians unnecessarily lose their lives. The West needs to move with greater alacrity and recognize that time is of the essence.

The United States and its allies also need to shift their thinking from helping Ukraine defend its mere existence to helping Ukraine restore its sovereignty over its internationally recognized borders. That entails Ukrainian victory and Russian defeat. Ukrainian success is defined by driving all Russian occupying and invading forces from Ukrainian territory, including Crimea. Adopting that mindset would light a fire under NATO to ramp up its military support for Ukraine.

Holding weapons systems in reserve for a rainy day or holding back out of fear of escalation doesn’t make sense when those systems are needed now to help Ukraine deal a decisive blow to Putin and his forces. Inflicting a major defeat on Russian forces today will make for a safer, better future—first and foremost for Ukrainians, but also for the entire European continent and, ultimately, the world.

The Ukrainians aren’t asking for our soldiers to fight their war for them, but they do need our weapons systems to win. That’s the least we can provide them. Faster, please.

Eric S. Edelman is counselor at the Center for Strategic and Budgetary Assessments and a non-resident senior fellow at the Miller Center of Public Affairs at the University of Virginia. He is also the co-host of The Bulwark’s Shield of the Republic podcast.  He was U.S. ambassador to Finland from 1998 to 2001 and under secretary of defense for policy from 2005 to 2009. David J. Kramer is executive director of the George W. Bush Institute and served as assistant secretary of state for democracy, human rights, and labor in the George W. Bush administration. 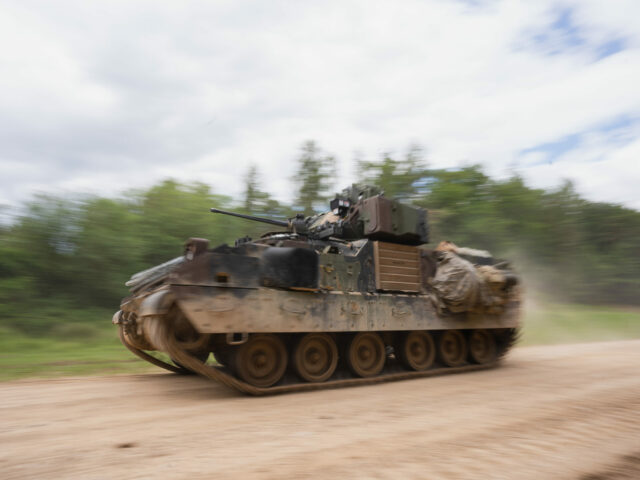 What Bradley Fighting Vehicles Will Mean for Ukraine