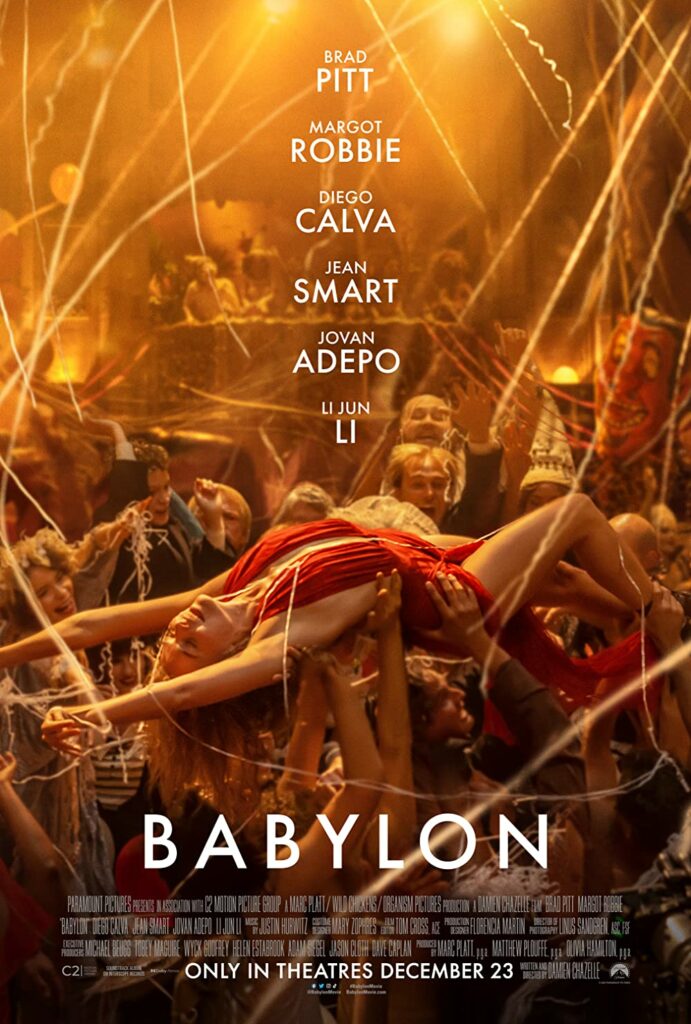 About two-thirds of the way through Damien Chazelle’s Babylon, gossip queen Elinor St. John (Jean Smart) is trying to explain to fading silent star Jack Conrad (Brad Pitt) why his career is, for all intents and purposes, over.

“It’s not your voice. It’s not your style. It’s not a conspiracy or a piece of press. There’s nothing you could have done differently and there’s nothing you can do. Your time is up. There is no why. Stop fighting it,” she says.* But then she goes on to explain why it doesn’t matter that much. Echoing no one so much as James Earl Jones’s Terence Mann in Field of Dreams as he thunders home his argument about baseball’s place in America, Elinor waxes rhapsodic about Hollywood as a vision, an ideal, an ever-renewing place of dreams that chews up talent and spits out something great, something lasting, something that will be watched by generations to come

Set during the transition from silents to talkies, Babylon takes place during one of the periodic episodes of upheaval that dot the history of Hollywood, the moment when tastes change and the audience demands something new and different. Mirroring Jack’s demise is the rise and fall of Nellie LaRoy (Margot Robbie), a would-be silent starlet, and Manny Torres (Diego Calva), a Mexican aide-de-camp for a bigwig at Kinoscope whom we first meet as he’s trying to deliver a diarrheic elephant to a party.

And what a party! My initial thought while watching the debauched dealings—involving, among other things, a Fatty Arbuckle stand-in being micturated upon; mountains of cocaine; a parade of topless starlets trying to catch the eye of the someone who can make them Someone—was “well, why even bother having an NC-17 rating any longer?” But my prudery is the point, I suppose; we are meant to be horrified by the lascivious excess, the grotesque goings-on. That these debased individuals will, hours later, go on to create beloved images lasting an eternity—LaRoy dressed as a floozie shedding a single tear in close-up; Conrad dressed as a warrior-king in battle, planting a kiss on a woman as the sun hits the mountains and pyrotechnics go off—is the point, you see.

There are a lot of “that’s the point, you see” moments in Babylon, a movie that moralizes about the legendary (and perhaps largely apocryphal) depravity of Hollywood’s silent era while simultaneously tut-tutting about the onset of the morality police. “There’s a new sensibility now,” Manny tells Lady Fay Zhu (Li Jun Li), whose lesbian romance with Nellie is raising eyebrows in the press and the wider public. “People care about morals.” Moments later, Manny is asking Sidney Palmer (Jovan Adepo), a black musician, to wear blackface so his skin tone matches that of his band in order to avoid a boycott of the film in the racist south. Whose morals, which sensibility, etc.

Chazelle is so flagrantly trying to have his cake and eat it too that it’s almost hard to get upset or annoyed at him or his film; I feel the need to grant him points for pure audacity. Audacity like, say, casting Tobey Maguire, best known to audiences as Spider-Man, as a malicious-looking gangster who introduces Manny to “the future of movies”: a musclebound freak wearing a mask who silently eats live rats while audience members toss twenty-dollar bills onto the stage. It’s like seeing the ghost of Hollywood future introduce the disruption that followed the action-hero boom of the 1980s and 1990s, which in turn followed the New Hollywood boom of the 1970s and 1960s. Closing the whole thing with a montage of glorious movie moments from films as diverse as Singin’ in the Rain and The Matrix—the division of celluloid past and digital future split with a frame declaring “fin de cinema,” an ironic wink in a film about the idea that sound itself ushered in the end of movies—is fittingly hubristic.

The cast up and down Babylon is amazing and almost eerily in sync with my own tastes. Actors I deeply love, like Taylor Nichols and Ethan Suplee, show up oh-so-briefly as if casting director Francine Maisler had thumbed through my own mental rolodex and said to herself “ah, here’s another face Sonny would like to see.” This is, perhaps, another reason I found myself drawn in by Babylon’s excess: I just liked spending time with almost everyone up on that big, beautiful screen.

It is worth noting, perhaps, that the three other people—a couple and a singleton—at my midday-Wednesday screening walked out during the aforementioned montage, believing Babylon to be over, thus missing the last few of its 189 minutes. This was itself a fitting, almost serendipitous, way to end the movie. Audiences come and go; they are as ephemeral and ever-changing as the names on the marquee. The darkened theater filled with flickering light? That’s eternal, everlasting, deathless. The actors and the audiences alike come and go, but the show goes on forever.

Well. Until the next disruption, anyway.

*As an aside: I pulled that line from a 2019 draft of the script; it is, with the possible exception of a few words, what Elinor says in the film. However, the rest of the speech from that draft was radically rewritten by the time it hit the big screen in a way to emphasize the eternal life of true superstars. We might call this The Brad Pitt Effect, and I feel like there’s a not-small lesson here about the true nature of power in Hollywood. But that’s an essay for another time.