Biden Needs to Talk to America

Most, though not all, of President Joe Biden’s problems can be summarized like so: He is misinterpreting his mandate. It’s not specifically that he’s being too liberal/progressive or too moderate/centrist, or moving too quickly or too slowly on this or that policy. Instead, he seems to be misinterpreting the kind of leadership that the country needs.

Although Biden didn’t explicitly adopt Warren Harding’s slogan, “Return to Normalcy,” he might as well have. That was the major theme of Biden’s campaign: The crazy times would be over and the normal times would resume. This was a very effective message, as we observed in dozens of focus groups of swing voters in key states.

But that message, like most political slogans, was vague, and what Biden seems to have thought it meant isn’t what the voters who delivered him the White House seem to have thought it meant. The president seems to have doubled down on “normalcy” in a Washingtonian sense, appointing experienced bureaucrats to senior administration roles, engaging in protracted negotiations with Congress to accomplish policy priorities, and reinstituting such practices as regular press briefings and the President’s Daily Brief from the intelligence community.

While all of those developments are welcome, voters don’t really care about normalcy in that sense (even if they should). They care much more about normalcy as defined by Biden in his 2020 Democratic convention speech, in which he thrice identified the “soul” of the nation as the great contested issue of the election. Voters weren’t looking for procedural normality, but for rhetorical normality. In our hundreds of hours of focus groups leading up to the election, Trump’s reliance on acting officials and his abuse of the pardon power hardly ever came up. His tweets came up reliably.

Perhaps Biden thought that, after four years of a president who seemed intent on filling every nook and cranny of every citizen’s life with ALL CAPS, Americans would appreciate a more reserved chief executive. This would be a miscalculation. Nothing rarely beats something.

It’s not a new observation to say that a president’s words are among his greatest tools. Theodore Roosevelt first called the presidency a “bully pulpit” in the early twentieth century. His distant cousin Franklin, through the Depression and the Second World War, made presidential broadcasts that were both intimate and informative about matters of the highest national importance. Ronald Reagan was for good reason dubbed the “Great Communicator.” As political scientist Richard Neustadt famously argued, “presidential power is the power to persuade.”

Yet Biden has so far spoken to the American people both infrequently and ineffectually. (That’s not to say that he’s never given a good speech—his wide-ranging address to a joint session of Congress in April was a notable example.) He has yet to give a memorable speech as president on a particular subject. Across his career, probably his most famous public utterance wasn’t in a speech at all—it was when, back in 2010, Biden called the passage of Obamacare “a big f**king deal.” Profanity and decorum aside, he seems incapable of addressing the current cascading crises with the same degree of urgency.

Most obviously, Biden has failed to make a focused, succinct case to the American people about why he’s spending so much of his own time—and forcing Congress to spend so much of its time—on infrastructure and social spending bills. Whatever arguments could be made for or against particular proposals matter less than the fact that the president isn’t making them clearly, prominently, or effectively enough.

Biden’s communications about Afghanistan were even worse. Rather than announcing his decision to withdraw American forces directly to the American people, the White House delivered the statement via an unnamed “senior administration official.” When he did personally address the country as the botched withdrawal was underway, his statements were hard-hearted, uninspiring, and often misleading.

Worse, the president has failed to address the ongoing threats to American elections with sufficient force and focus. Republicans around the country are promoting the crazed notion that the 2020 presidential election (but only the presidential election!) was stolen, while seeking to rewrite laws and intimidate officials with the aim of ensuring that a Democrat will not be inaugurated in 2025, whatever the votes say. Ten months after an insurrectionist mob attacked the U.S. Capitol, the most influential figure discussing threats to free and fair elections isn’t the president of the United States but Tucker Carlson.

Perhaps President Biden doesn’t want to wade more deeply into the fight over voting rights and election administration for fear of appearing to serve only his own electoral interests rather than those of the country. That’s malarkey. He could point to the strong Republican showing in Congress and in the states in 2020 and insist that those elections are as legitimate as the presidential contest. He could point to elected Republicans, including election officials, around the country who have already shown real political courage by continuing to confirm the truth that Biden won last year. He could emphasize that the people who do the actual counting of votes aren’t Washington politicians or even election administrators, but volunteers—disproportionately little old ladies from down the street.

But President Biden isn’t doing any of that. Instead, he’s ceding the field to the conspiracy theorists who have done so much to harm American democracy.

Each of these developments—infrastructure, Afghanistan, elections—has been or has the potential to be a political threat to Biden and his party. There are others: the border, inflation, vaccines, climate change. As the president watches his poll numbers disappear below the water line, he must be tempted to do something. He’s done enough. He should say something.

Most of America’s great (and even some not-so-great) presidents are remembered by their key phrases because words are the primary means by which a president leads. If Biden is to be a successful president, he can weather mistakes and misfortune, so long as he gives voters the leadership they so desperately want. Management is important, but rhetoric—it’s a big f**king deal.

Sarah Longwell is publisher of The Bulwark. Benjamin Parker is a senior editor at The Bulwark. 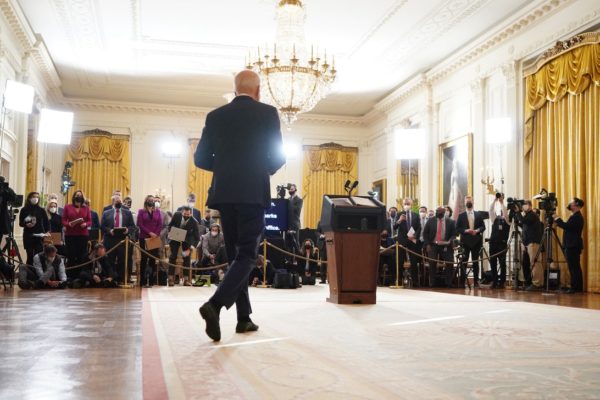 Biden’s Press Conference: The Good, The Bad, and The Ugly 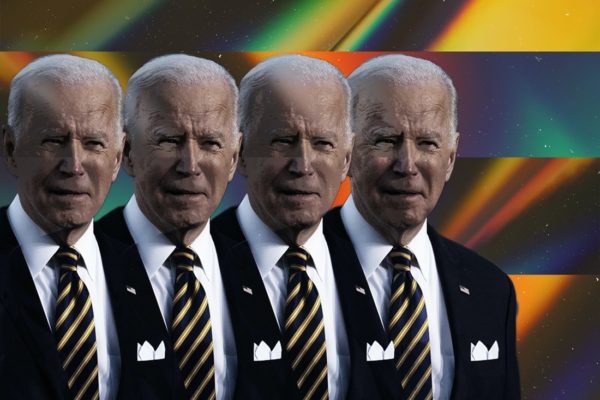 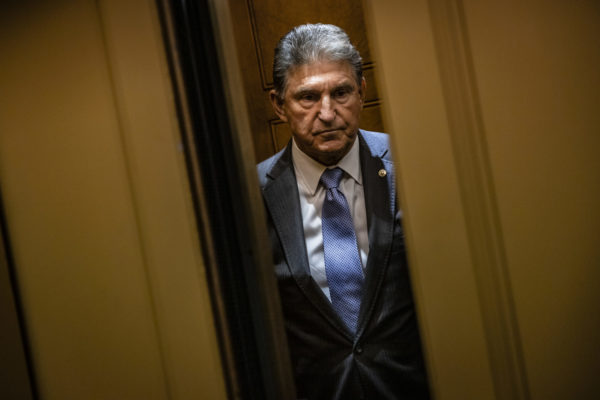 The Progressive Protests Against Manchin Backfired