Bullet Train feels a bit like Guy Ritchie’s Snatch as envisioned by half of the team that brought to life John Wick, with a sprinkling of the convoluted plotting and colorful characters of Joe Carnahan’s Smokin’ Aces. But as much as I like each of those individual pieces, something about the final product of David Leitch’s Bullet Train simply doesn’t work: the endless flashbacks throw the pacing slightly off, which in turn leads to several inert stretches in a movie that should move as swiftly as the titular conveyance.

Ladybug (Brad Pitt) is tasked with hopping onto a train, snatching a very particular briefcase, and hopping off the train again. In the course of trying to grab this briefcase, he’ll be confronted with a grieving father (Andrew Koji) and that father’s father (Hiroyuki Sanada), a Mexican gangbanger convinced Ladybug killed his wife (singer Bad Bunny, credited here as Benito A Martínez Ocasio), a wicked girl whose charm hides her evil (Joey King), a poison-wielding hitwoman (Zazie Beetz), and “twins” Lemon (Brian Tyree Henry) and Tangerine (Aaron Taylor-Johnson).

Oh, and a conductor who is very, very cranky that this gaijin has refused to exit the train after the single allotted stop.

The train is carrying all of these passengers to a meeting with the White Death (Michael Shannon), a Russian expat who has conquered the Japanese underworld. Lemon and Tangerine are escorting the White Death’s rescued son and a briefcase (yes, the one Ladybug is after) filled with ten million dollars.

These characters are sketched out in ways that make them feel real, or at least real-ish, each of them having personalities that transcend their quirks. Lemon, for instance, relates to the world through Thomas the Tank Engine, assigning those he meets a personality type: Are you a Diesel or a Percy, a Thomas or a James? This carries through Lemon’s character in ways meaningful (he has a better read on most everyone on the train than most everyone on the train) and minor (in a flashback we see him holding a wooden train while watching a soccer match). The character work here throughout is relatively efficient and well done.

Similarly well done are the action sequences. Leitch co-directed John Wick with Chad Stahelski, and their production team 87Eleven was the squad that brought that film’s iteration of gun-fu to life. That company became 87North, and 87North, alongside Columbia Pictures and Fuqua Films, produced Bullet Train. One imagines that Leitch and the team at 87North came up with scenarios they wanted to see and then built fights around them: “What would it look like if Brad Pitt brought a briefcase to a knife fight?” “How do you solve a Mexican standoff with deadly venom in lieu of handguns?”

It’s always fun watching big personalities play big roles; Pitt does put-upon nicely, and Michael Shannon as a wide-eyed maniac is always worth your time. But Henry and Taylor-Johnson steal the movie as the twins; in a way, it really does feel like their film more than Pitt’s. 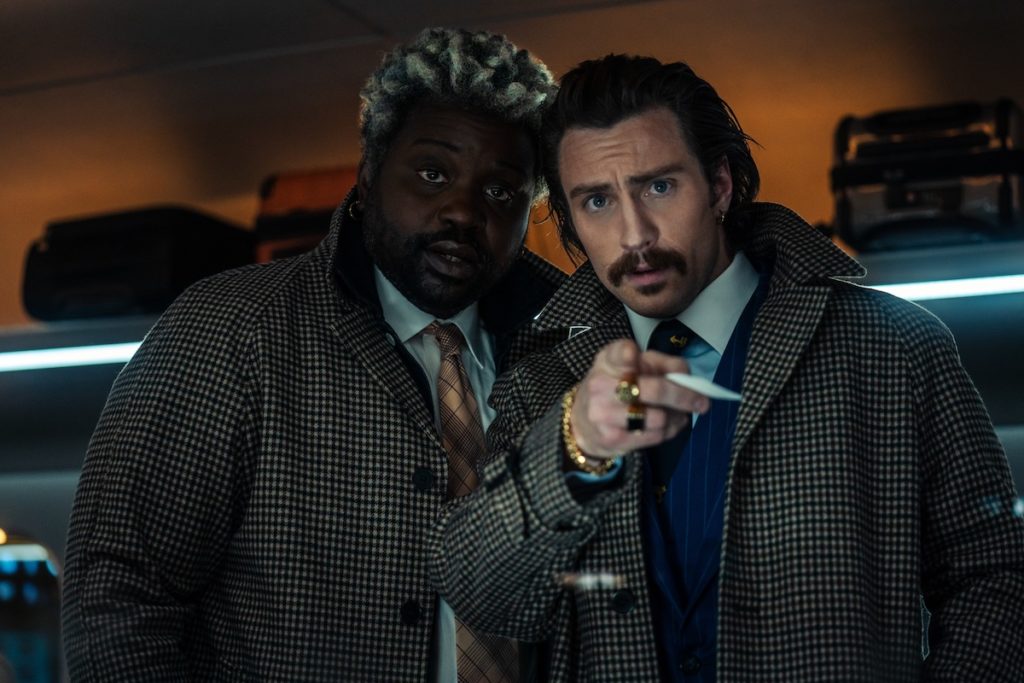 Again, I love every component part of this film. But I can’t shake the memory that, while watching it, I sometimes found myself . . . tapping my foot in anticipation. Like so many Milhouses before me, I kept wondering when this train was going to pull in to the fireworks factory.

Part of the problem is the flashback-heavy structure of the picture. Even when this constant time-hopping pays off—as it does when we see why Bad Bunny’s Mexican assassin, the Wolf, wants Ladybug dead—the way the sequences are paced and placed brings the forward momentum of the movie to a screeching halt. I couldn’t help but think back to Snatch and the way that similar flashbacks—such as our introduction to how Bullet Tooth Tony (Vinnie Jones) got his name—are handled both briskly and with humor. Imagine being on a train that drops from 200 mph to 50 mph in reverse every 25 minutes or so and you get the idea.

It is similarly instructive to recall how John Wick is structured: After 30 minutes or so of setup and anticipation, a gang of hitmen break into John Wick’s house and pay the price. And the movie doesn’t let up for the hour that follows; it just moves from set piece to set piece with the absolute minimum exposition required. Bullet Train frequently lets up, convinced that the convoluted internal logic of the plot is more important to us than seeing cool fights in a weird, enclosed space.

This is one of those films I wanted to like more than I did, indeed, that I can almost talk myself into remembering I liked more than I did. Perhaps Bullet Train will grow on me in the coming years. All I know is that at this moment, after one viewing, for some reason the whole thing just doesn’t quite work. It’s 80 percent of a good movie, but that missing fifth is crucial.