Since all he has is a hammer, everything looks like a culture-war nail.
by Cathy Young
KABUL, AFGHANISTAN -- APRIL 28, 2021: A Mi-17 helicopter from the 777 Special Mission Wing takes off after delivering Chief of General Staff of the Armed Forces Gen. Mohammad Yasin Zia, safely back to the Ministry of Defense, in Kabul, Afghanistan, Wednesday, April 28, 2021. (MARCUS YAM / LOS ANGELES TIMES)
Share on Facebook Share on Twitter Share via email Print

There has been no shortage of bad takes on the crisis in Afghanistan, from both sides of the political aisle. But one that stood out last Thursday, even as reports came in of a deadly attack in Kabul on U.S. troops and Afghan civilians, was this contribution from Manhattan Institute fellow and anti-wokeness crusader Christopher Rufo blaming the collapse of the American mission on too much woke ideology: 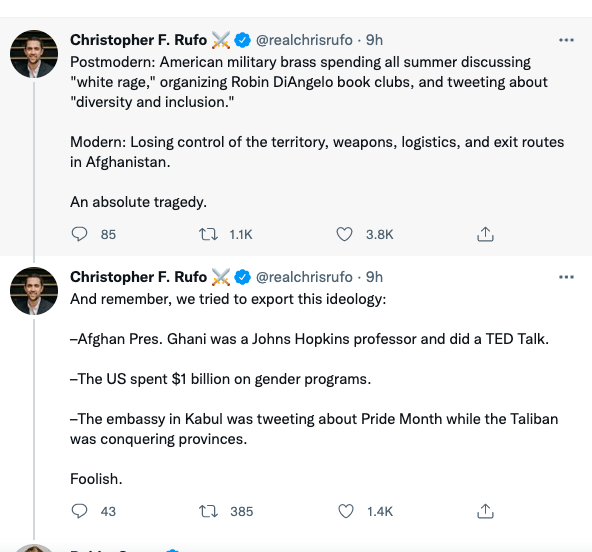 One needn’t be a fan of Robin DiAngelo, the diversity guru and White Fragility author whom even progressives mock these days, or of other “woke” efforts to be skeptical of Rufo’s glib explanation. For one thing, while the Biden administration certainly bears major responsibility for the Afghanistan debacle, it was the unwoke Trump administration that set the withdrawal of American troops in motion and entered peace talks with the Taliban. (Of course, one could always argue that the withdrawal would have been handled much better if Donald Trump were still President—a “perfect” and “beautiful” exit, no doubt.) For another, there is absolutely no evidence that “wokeness” in the military had anything to do with the American failure in Afghanistan. And, finally, the “gender programs” on which the United States spent close to $800 million between 2002 and 2019 had very little to do with “woke” feminism or gender studies.

But Rufo’s entry in the Worst Tweets on Afghanistan sweepstakes was par for the course for the documentary filmmaker-turned-activist, who gave a candid explanation of his strategy against the woke left a few months ago: 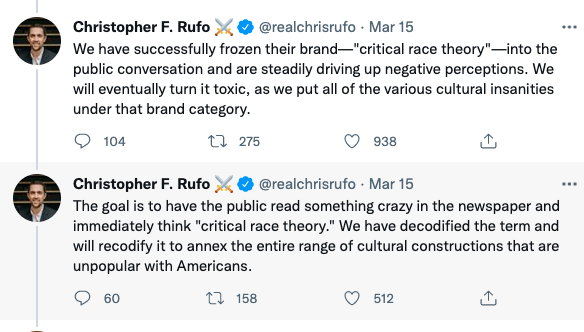 To Rufo’s detractors, this is a self-incriminating admission of dishonesty and bad faith—the Twitter equivalent of the movie scene in which the villain explains his dastardly plan. Rufo himself has defended these comments to the Washington Post as a description of normal political tactics. Either way, the comments provide useful context for the tweets about our “woke” defeat in Afghanistan: This is Rufo trying to “annex” an Afghanistan exit widely seen as a fiasco into the general category of “postmodern” progressive racial and gender politics.

Unlike many critics, I think Rufo makes some perfectly valid points about “wokeness” and even “critical race theory.” (He vastly overuses “CRT” as a catch-all term for various progressive ideas—apparently as a deliberate “branding” tactic—but critical race theory and its offshoots actually do have more linkage to these ideas than many of Rufo’s detractors admit.) He first caught my attention last year with genuinely alarming and fairly well-documented reports about the excesses of “anti-racism” training in schools and workplaces, including organizations funded with taxpayer money. One such find was a Seattle city government program where white staffers were herded into race-segregated struggle sessions requiring them not only to examine how they and their families benefit from “the system of white supremacy” but to recall and reflect on a recent incident in which they may have “caused harm to a person/people of color at work.” Another was a school exercise in San Cupertino, California in which third graders had to “map” their identities and state which aspects were “privileged” and which oppressed. (The program was tried in the classroom only once and was suspended due to parental outcry.)

Unfortunately for those of us who believe these “cultural insanities” do need to be exposed, Rufo is an extremely flawed messenger. He has done impressive work getting internal documents from whistleblowers, but his reporting is often compromised by exaggeration and cherry-picking. Thus, he has claimed that white male employees in a 2019 seminar at Sandia Labs (a government-funded nuclear-technology research center in New Mexico) had to write “letters of apology to women and people of color.” Yet of the ten worksheets photographed by Rufo’s source and posted on his site, only one had an explicit “I’m sorry,” while a couple of others had vaguely apologetic statements about “white privilege.” (Other messages included “We should have mutual agreement that it is OK if we disagree with each other.”) More recently, Rufo announced in a Twitter “scoop” that one author of California’s proposed “ethnic studies” curriculum had called for a “‘countergenocide’ against white Christians” in a book the curriculum repeatedly cites. Yet a look at the sources, including Rufo’s own City Journal article on the story, makes it obvious that the book used “countergenocide” to mean resistance to the “genocide” of native populations by white Christians, not genocide in response to genocide. There are plenty of good reasons to criticize the curriculum, but Rufo turns valid complaints into breathless hyperbole and “white genocide” innuendo.

There is also the fact that in the fall of 2020, when he first gained visibility, Rufo overtly and aggressively hitched his activist wagon to Donald Trump. After Rufo appeared on Tucker Carlson’s Fox News show in September 2020 to discuss “critical race theory” in government-funded diversity training and urged Trump to ban the practice, Trump promptly issued an executive order doing just that. “He delivered,” Rufo exulted on Twitter, praising Trump’s order as “the first successful counterattack against critical race theory in American history.” Rufo also brushed aside critics who were sympathetic to the goal but skeptical of the strategy (such as myself) as snobs who would rather “write another thinkpiece explaining why wokism is bad” than “wield actual power.” After Trump’s defeat, Rufo channeled his quest for “power” into advocacy of “anti-CRT” state laws. Yet a number of strong critics of “woke” ideology—including the Foundation for Individual Rights in Education, a leader in the fight against “progressive” censorship in academia—have decried these laws as likely to infringe on free expression and the exchange of ideas.

If Rufo’s crusading against wokeism and critical race theory at least has valid concerns behind the hyperbole, his typically grandiose Critical Afghanistan Theory tweets don’t even have that distinction. Yes, the chairman of the Joint Chiefs of Staff, Gen. Mark Milley, angered conservative activists in June by defending anti-racist teaching in the U.S. military, including a seminar on “white rage” (with voluntary attendance) at West Point—and particularly by linking “white rage” to Trump supporters’ attack on Congress on January 6. This hardly means that U.S. military brass focused on “white rage” and wokeness while ignoring the looming crisis of Afghanistan. In March, Milley was somehow able to take time out of his busy schedule of Robin DiAngelo book clubs to make an impassioned plea for keeping U.S. troops in Afghanistan at a National Security Council meeting.

Even more absurd is Rufo’s claim—also made by others on the right, including Carlson—that the United States tried to “export” woke postmodernism to Afghanistan. For instance, the idea that now-former Afghanistan president Ashraf Ghani is “woke” because he taught at Johns Hopkins University thirty years ago and “did a TED talk” (actually two TED talks: “How to Rebuild a Broken State” in 2005 and “A Vision for the Future of Afghanistan” in 2020) is simply bizarre.

But Rufo’s identification of U.S.-sponsored “gender programs” in Afghanistan with extreme and nonsensical “woke” ideology is especially insidious—as well as factually wrong. It is worth noting that the bulk of the money the United States spent on gender-focused projects in Afghanistan—$627 million, out of a total $787.4 million—was spent on programs addressing the needs of women and girls in 2003-2010, that is, mostly under the notoriously radical feminist Bush administration. Many of these programs had to do with such issues as maternal mortality, health care, and access to education for girls and young women. They certain didn’t, as Carlson suggested in his segment, traffic in such flights of gender theory as “the idea that men can become pregnant” (that is, that biologically female transgender persons who identify as male should be regarded as pregnant men). While there were some educational programs intended to change attitudes toward male and female roles, such projects hardly amount to inane wokeism in a society where wife-beating and child marriage have been traditionally viewed as normal. Carlson has sneeringly (and approvingly) remarked that the people of Afghanistan don’t think of masculinity as “toxic,” but it’s hard to think of a more toxic version of “masculinity” than the Taliban.

One can discuss whether American “gender programs” in Afghanistan alienated parts of the population by trying to do too much, too soon. (The Special Inspector General for Afghanistan Reconstruction suggested in a report that these programs could have been more attuned to the Afghan cultural context, but it does not mention any significant popular backlash.) But the notion that they had something to do with “woke” feminism or postmodernism is laughable. For what it’s worth, the Women, Peace, and Security Act codifying American gender-related programs in Afghanistan was passed by a Republican-controlled Congress and signed by President Trump in 2017.

It wasn’t long ago that right-wing outlets such as Breitbart decried left-wing failure to condemn radical Islamist misogyny as a stark example of political correctness gone mad. Now, we have right-wing culture warriors like Carlson and Rufo scoring political points by suggesting that basic human rights for women in Afghanistan are a pernicious attempt to export woke postmodernist ideology.

The other day, after seeing a couple of Rufo exposés on what sounds like genuinely awful (even discounting for the usual hyperbole) social justice training at Verizon and Bank of America, I wondered if I was being too uncharitable to the guy. Then, he posted those ghoulish Afghanistan tweets exploiting a tragedy and attacking women’s rights to promote his crusade. The question answered itself.