[This article is adapted from the new book American Kleptocracy: How the U.S. Created the World’s Greatest Money Laundering Scheme in History.]

In 1983, a doughy, muttonchopped 32-year-old named Jean-Claude Duvalier had a problem. A dozen years earlier, Duvalier—known as “Baby Doc” to cronies and detractors alike—had ascended to the presidency of Haiti, following the death of his autocratic father, “Papa Doc.” Almost immediately, Baby Doc smothered any talk of reform. Haitians watched as opposition activists went missing and independent media went silent. Any hopes that the country’s democratic revolution of nearly two centuries prior would finally come to fruition vanished.

But Baby Doc wasn’t a staid, stale dictator in his father’s mold. He had a kind of malign joie de vivre, an almost sociopathic need to make the most of his time crushing the Haitian populace. His multimillion-dollar 1980 wedding, perhaps the most lavish ever in the Caribbean, featured a 101-cannon salute, $100,000 worth of fireworks, and, as the Washington Post reported, a setting that “hid [Haiti’s] poverty behind a façade of papier-mâché roses.” Duvalier dabbled in crimes against humanity—including housing political prisoners in jails dubbed the “triangle of death,” many of the prisoners suffering in unspeakable pain before succumbing—while regime supporters made sure any critical journalists were tortured or exiled for their reporting.

Looting state coffers, pillaging local populations, pocketing as much national wealth as he could stomach, Duvalier built a personal nest egg worth upward of $800 million—enough to place him alongside genocidaires like Slobodan Milosevic (looted wealth: $1 billion) and crooks like Peru’s Alberto Fujimori (looted wealth: $600 million) among the great kleptocrats of the twentieth century. “If this money had been invested in clean water projects, we would have saved so many thousands of lives,” an investigator who tried to track Baby Doc’s assets later related to me. “That, to me, is the legacy when I think of Duvalier.”

With the help of a few friends, Baby Doc opened an American bank account, and immediately began plowing his dirty millions through the till. The Americans he encountered in those days—before banks had to think twice about servicing dictators, no matter the blood dripping from their regimes—readily opened their doors to Baby Doc. Like another great kleptocratic American client of the era, the Philippines’ Ferdinand Marcos (looted wealth: $5-10 billion), those in late-Cold-War Washington happily embraced Duvalier in his nominal stand against communism.

Still, Baby Doc didn’t want to make his American investments too obvious. He signed up an American lawyer, Kevin MacCarthy, who helped direct a shell company Baby Doc could use to obscure his finances. His American bank account kept growing, with millions in Haitians’ missing money piling up and gathering interest for Baby Doc’s use. Baby Doc scouted South Florida for a yacht, splurging over $6 million in today’s money on a schooner he liked. And like so many others, he eyed a place in New York. 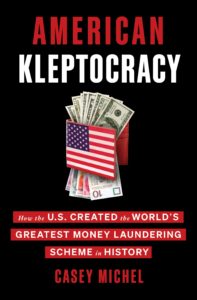 Smack in the middle of Manhattan, a new building offered a potential home for Baby Doc’s dirty millions. Rising nearly sixty stories, the new tower, like a shard of obsidian thrust in brick-and-brass Midtown, wanted new tenants. One unit caught Baby Doc’s eye: Located on the 54th floor, with stunning views of New York City, the pad cost approximately $6 million in today’s dollars. This, the dictator decided, was the one he wanted. Baby Doc’s lawyer went forward with the purchase, and on April 22, 1983, he inked the deed.

There on the contract was the description of the unit, the signature of the notary present, and the details of the purchase itself. All formal, rote stuff. But on the second page of the contract—hovering just above the names of Baby Doc’s lawyer and shell company—was a scrawl Americans would become familiar with in the years to come. It belonged to a man who would come to dominate America’s luxury property market, America’s reality-TV programming, and, in time, America’s politics.

It was the signature of Donald Trump, the man who decided to sell this unit in Trump Tower to one of the most heinous despots the Western Hemisphere had ever seen.

On that day in 1983, decades before Trump entered the White House and upended the entire trajectory of American democracy and American kleptocracy alike, Trump landed his first kleptocrat.

It wouldn’t be his last.

While it will take years, and potentially decades, to get a full picture of Trump’s financial history, it’s clear that Trump’s properties in the United States alone may have laundered billions of dollars even before he ascended to the White House. According to the most comprehensive analysis available, Trump’s American properties sold over 1,300 units—over one-fifth of Trump’s total available condos—to buyers matching money-laundering profiles: anonymously, to shell companies and cash buyers, often purchased in bulk and without ever revealing the identities of the ultimate beneficiaries. (Even today, thanks to the secrecy regime still in place in the United States, only a small fraction of the ultimate owners of these Trump units have ever been disclosed.) The final bill of these suspect purchases ran to a dumbfounding $1.5 billion—and that’s even before adjusting for inflation.

It seems like every single one of Trump’s American properties happily feasted on the dirty money flowing into the United States over the past few decades. Take Trump Tower in New York, for instance. Baby Doc was hardly the only one who eyed the building as a potential personal laundromat. Nearly a quarter of the building’s total unit sales went to buyers who, like Baby Doc, fit the money-laundering profile. Total value of such sales: $30 million. Or pop over to the west side of Manhattan, where Trump erected the Trump International Hotel and Tower in 1996, one of his keystone properties, dominating Columbus Circle and Central Park’s southwest corner. Nearly 30 percent of that building’s unit sales went to buyers who fit money-laundering profiles. Total value of such sales: $135 million.

Or what about Trump World Tower? Hugging Manhattan’s eastern border, overlooking the East River, the building opened in 2001. Trump made sure to market it to the kinds of buyers who had long treated him and his buildings so well. Some 10 percent of the building’s unit sales went to the same kind of anonymous buyers, the ones eager to take advantage of the kleptocratic tools the United States provides in spades. Total value of such sales: $110 million. Or look at any of the other Trump buildings dotting Manhattan like structural smallpox. Trump Park Avenue took in $80 million from these suspect buyers. Trump Palace Condominiums took in another $43 million. Trump Parc netted another $51 million. The building that was known until 2017 as Trump SoHo—a building that Trump did not own, but that his company partnered in building and managing, and that was featured on The Apprentice—appears as if it was built solely to service these anonymous clients. After opening in 2010, a staggering 77 percent of unit sales went to buyers who fit money-laundering profiles, raking in $110 million. Trump SoHo was, as one lawsuit said about the building, “a monument to spectacularly corrupt money-laundering and tax evasion.”

But it’s not as if these sales were limited to Trump-owned and -branded properties in New York alone. In a nod to the fact that transnational money laundering is a truly American phenomenon, the suspect purchases tied to Trump properties took place across the country. Trump Hollywood, tucked along Florida’s Atlantic shoreline, opened in 2009, flinging nearly half of its units to anonymous buyers for $136 million. A bit further south, Trump Grande 1, which opened in 2008, let one-third of its unit sales go to these suspicious buyers for some $105 million. That same year, a trio of other Florida properties—known a bit blandly as Trump Towers 1, 2, and 3—netted $291 million from buyers that fit traditional money-laundering models.

Not that Trump was himself any stranger to Delaware’s services. Trump turned to the state time and again for his corporate needs, registering some 378 companies in the state for all sorts of corporate and “tax minimization” schemes. (“It’s a lot,” Trump would later admit, though how many other anonymous Delaware shell companies Trump himself personally oversaw is anyone’s guess.) And of course, Trump has been connected time and again to a range of other Delaware shells, even the ones he doesn’t nominally oversee. When it emerged in 2018 that Trump had helped steer $130,000 in hush money to former porn actress Stormy Daniels, his since-jailed lawyer, Michael Cohen, knew just where to turn for the anonymity they desired: Delaware.

All of this was American kleptocracy in miniature—American kleptocracy in a single person, who eventually used the proceeds of these suspect sales to help build a war chest that would launch him to the presidency. And even if we still only know a handful of the details of all the kleptocrats—from places like Indonesia, Congo, Kazakhstan, Azerbaijan, and elsewhere—who connected with Trump properties, all of the details point to one, inescapable conclusion: Few Americans have profited as much from American kleptocracy, and from the dirty money linked directly to corrupt oligarchs and officials and mafiosi abroad, as the Trump family.

In many ways, kleptocracy built Trump’s empire. And by the mid-2010s, Trump wanted it to help build something else: a political empire, one that could cement America’s kleptocratic transformation—and continue it for generations to come.

Casey Michel, a journalist who covers transnational corruption, is the author of American Kleptocracy: How the U.S. Created the World’s Greatest Money Laundering Scheme in History, forthcoming next week from St. Martin’s Press. Twitter: @cjcmichel. 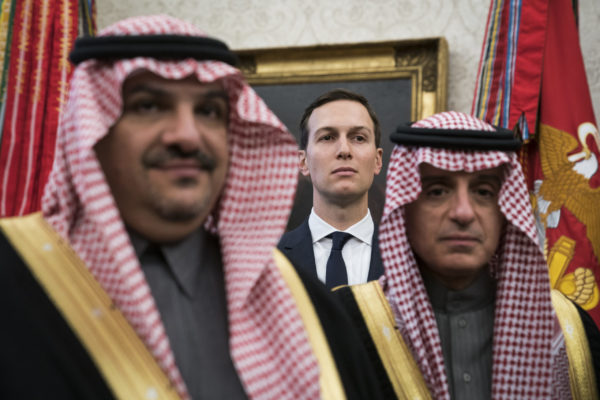