Explaining the administration’s recent rhetorical shift on fiscal matters.
by James C. Capretta
WASHINGTON, D.C., May 4, 2022: President Joe Biden delivers remarks on economic growth, jobs, and deficit reduction in the Roosevelt Room on Wednesday May 4, 2022. Director of the Office of Management and Budget Shalanda Young, Assistant to the President and chair of the Council of Economic Advisers Cecilia Rouse, and Assistant to the President and Director of the National Economic Council Brian Deese were in attendance. (Photo by Demetrius Freeman / Washington Post / Getty)
Share on Facebook Share on Twitter Share via email Print

As part of a messaging makeover, President Biden now regularly touts his administration’s fiscal record. In particular, he notes that the federal budget deficit is expected to fall dramatically in 2022 compared to 2021—$1.5 trillion, according to administration estimates. His 2023 budget plan also highlights the deficit cutting effects of his policies over the next decade.

This new rhetorical emphasis of fiscal restraint, instead of expansion, raises two questions. First, are the president’s claims true? Second, if they are, what, if anything, does that signify?

Before attempting some answers, it is useful to review the political context for the reworked talking points.

An important target of the revamped communication plan is of course Joe Manchin, the Democratic senator from West Virginia who remains the primary obstacle to passing the administration’s Build Back Better agenda. In late 2021 and then also several times this year, he has made it clear he will only support a major domestic spending bill if the net effect is a reduction in budget deficits over the coming decade of several hundred billion dollars (he also has several other policy-focused demands that will make passing the bill challenging). Administration officials are trying to convince him that they share his concerns about escalating government debt.

The other audience is the broader public. The number-one issue for Americans right now is inflation, which emerged rather suddenly as major problem just as the president’s new economic policies were being implemented. The suspicion is that the timing is not a coincidence. Absent some sudden change in conditions, House and Senate Democrats are likely to get punished by voters at the polls in November. The administration’s new focus on deficit-cutting is intended to convince the electorate it has a plan to slow the pace of price increases.

As to the status of the deficit in 2022, the administration is correct that it is set to fall by a large amount, but the reason is not particularly flattering for the president.

According to the latest budget data from the Treasury Department, at the halfway point of fiscal year 2022 (which occurred at the end of March), the deficit stood at $668 billion, which is $1.038 trillion below what it was at the same point in 2021. The administration’s budget projects that, over all of fiscal year 2022, the deficit will be $1.415 trillion, or $1.360 trillion below the full year deficit in 2021. The president’s recent reference to a $1.5 trillion improvement seems to be based on stronger than expected revenue growth pushing the deficit down more than was forecast in the budget plan. Through March, revenue in 2022 is up 24 percent compared to 2021.

The primary reason the deficit is falling so quickly is because Congress approved large COVID response bills in 2020 and 2021—led by the $1.7 trillion CARES Act of March 2020 and President Biden’s $1.8 trillion measure in March 2021. Together, these bills lowered federal tax receipts and expanded federal spending in ways that were quite dramatic. The resulting deficit in 2020 was $3.132 trillion, or 14.9 percent of GDP. In 2021, it was $2.775 trillion, or 12.4 percent of GDP. As the relief provisions now expire, the budget deficit has begun to return to the pre-2020 norm.

It helps that the economy also is very strong, with many people returning to work. That also helps explain the jump in revenue.

But the primary story is one of fading stimulus, not newly imposed restraint.

Looking past 2022, it is hard to be particularly optimistic. The administration’s budget projects the government will run a cumulative deficit of $14.4 trillion over the period 2023 to 2032. At the end of this period, federal debt will reach 107 percent of GDP, up from 102 percent today.

And this forecast assumes a benign economic environment that seem rather unlikely. Among other things, the projection places consumer inflation at just 4.7 percent in 2022, and at 2.3 percent in 2023 and thereafter, even as economic growth remains robust. It will be very difficult for the Federal Reserve to engineer such a dramatic fall in inflation (from over 8 percent currently) without also inducing much slower economic growth, and perhaps a recession.

Further, as the Fed pushes up interest rates, the cost of servicing the federal debt will rise above the budget’s forecast. The administration assumes an interest rate of 2.1 percent in 2022 for 10-year Treasury notes, and 2.5 percent in 2023. The market has already pushed the rates for these debt instruments above 3.0 percent, and the Fed is far from finished in pulling back on its accommodative measures. Put another way, the administration’s projection of the government’s net interest payments could be well off the mark. A Congressional Budget Office (CBO) tool helps quantify the risk: Adding just 1.0 percentage point to the 10-year interest rate increases the federal deficit by over $1.0 trillion over a decade.

On one level, President Biden’s rhetorical shift toward Manchin on fiscal matters is a welcome development. With taming inflation now a matter of some urgency, the administration has a strong incentive to show it is serious about restraining federal deficits.

Still, this seems mostly about the politics, not substance. The president has not abandoned his plan to relieve many students of their higher education loans, which would be inflationary and hard to justify on policy grounds. And his request for appropriations for 2023 is anything but modest: he wants an increase of 11 percent, or $78 billion, for nondefense accounts and veterans programs. Responding to the crisis in Ukraine is sure to add tens of billions of dollars more to federal spending in both 2022 and 2023.

Nonetheless, even if the motivation is strictly political and situational, one can still be pleased that fiscal restraint is making a (somewhat unsteady) comeback. The alternatives would be worse. 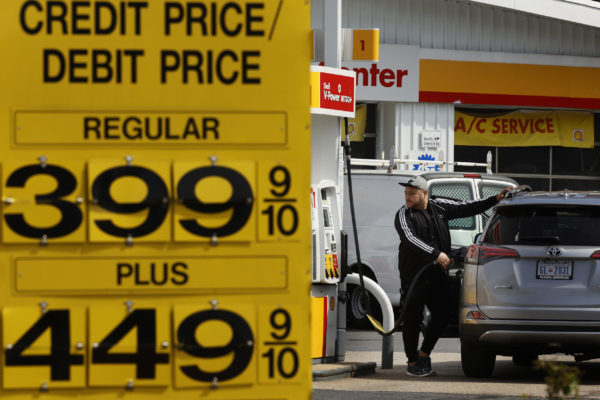