Jay Cronley was a writer. The bulk of his career was given over to sports commentary and writing about horse racing. His work appeared in, among other venues, ESPN, the New York Times, and Tulsa World. Born in Nebraska, he made Oklahoma his home, and eventually was honored as a member of the Oklahoma Writers Hall of Fame in 2002.

Outside of the sports world, and outside Oklahoma, Cronley became known as a comic novelist. At the time of his death, he’d written eight novels. His last, Shoot!, came out in 1997; he passed away in 2017. Whether this long unproductive period, at least as far as his fiction is concerned, was due to his having run out of steam, or his brand of humor falling out of fashion (it was in some ways very much of its time), is difficult to say.

A sportswriter taking up a side job writing fast-paced comic novels is practically a cliché (one Cronley seemed aware of), but the novels themselves—at least, the three I’ve read—are, in their way, quite unusual, so it’s not hard to see why the strange thing that happened in the late ’80s happened. The strange thing in question being that once a year, for three years straight, one of Cronley’s novels were made into films. Each film starred either a major comedy star or an Oscar-winning actor, and in one case the movie was shepherded into existence by the major star at its center. All three movies are, in my opinion, quite good—two are personal favorites—and all three were flops. There’s no logical explanation for this latter fact, other than, perhaps, the public is a bunch of numbskulls. 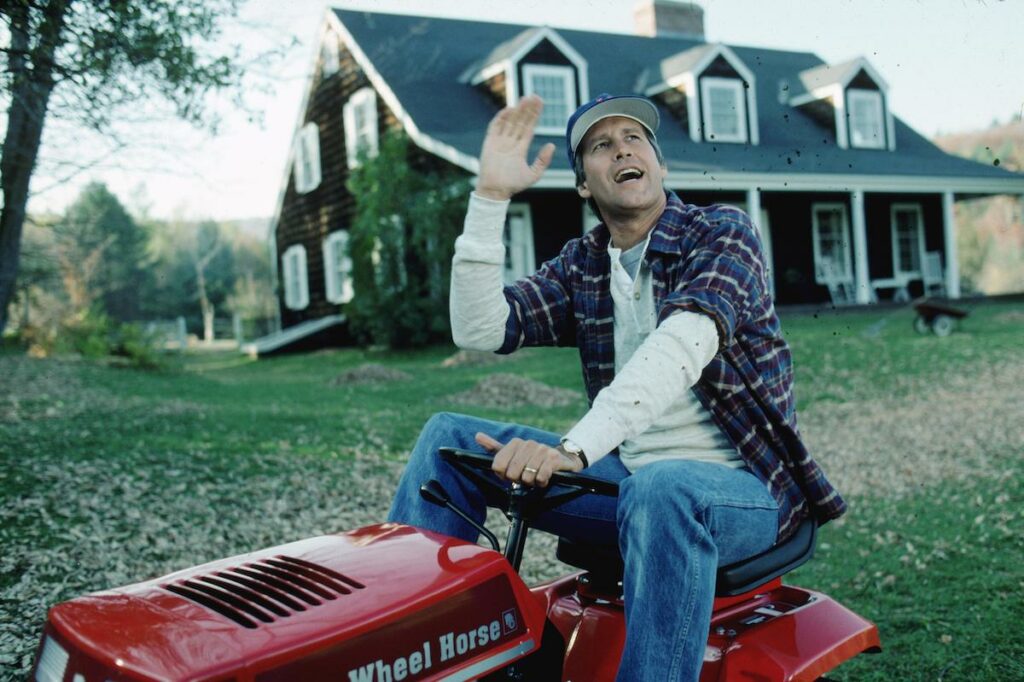 I’ll begin with one of his later novels, and the first by Cronley I read. Funny Farm chronicles the misadventures of Andy and Elizabeth Farmer (Cronley seems to have favored naming his lead characters in a way that mirrored what they would become, or what they’d like to become) as they move from New York City into the country. Andy, a former sportswriter, wants to become a novelist, and his big idea is a comic novel about a group of friends planning a heist. (As I’ve said, Cronley possessed a certain self-awareness.)

On the surface, Funny Farm sounds like a potentially fitfully amusing trifle, a book you might recommend to a friend, but then again you might not. What the cutesy title and goofy cover hide, however, is something close to misanthropy – certainly anarchy. Some people might describe the pacing of this book as “just one damn thing after another.” Others would say it’s relentless. I myself would call it “ruthless,” with Cronley dumping one heartbreak, financial and otherwise, on poor Andy’s head. Or maybe not “poor Andy,” since the worse things get for him, the worse he behaves. When Elizabeth tells him frankly that she doesn’t like the first few chapters of his book, he becomes enraged, clinching his fist and taking a step towards her. He never strikes his wife, but he could have. He eventually becomes a miserable drunk (Elizabeth goes so far as to try and find the nearest AA meeting, which turns out to be 55 miles away), and he shows up to a meeting of their divorce attorneys visibly depleted, his belt pulled as tight as he can get it. This is ultimately what saves their marriage: how pathetic he’s become.

What tips Funny Farm’s tone into one of misanthropy is that all of its darker material—the subtle hints of potential violence, Andy’s drunken mania, etc.—is pitched to the reader at the exact same level of comedic deadpan glibness as the more traditional silly bits: Andy unknowingly scarfing down fried lamb testicles, buying a dog that immediately runs away, and so forth. It’s all of a piece.

The movie, which came out in 1988, never goes quite as far. The last film made by George Roy Hill (Butch Cassidy & the Sundance Kid, The Sting, Slaughterhouse-Five) and starring Chevy Chase, a concerted effort is made to keep Andy just this side of likable. He drinks too much, but not that much, and he immediately apologizes to Elizabeth for flying off the handle due to her critique of his book. So the movie is more shy about its underlying darkness, although the funniest joke about Andy’s struggles with writing was created for the movie, and is nowhere to be found in the novel. 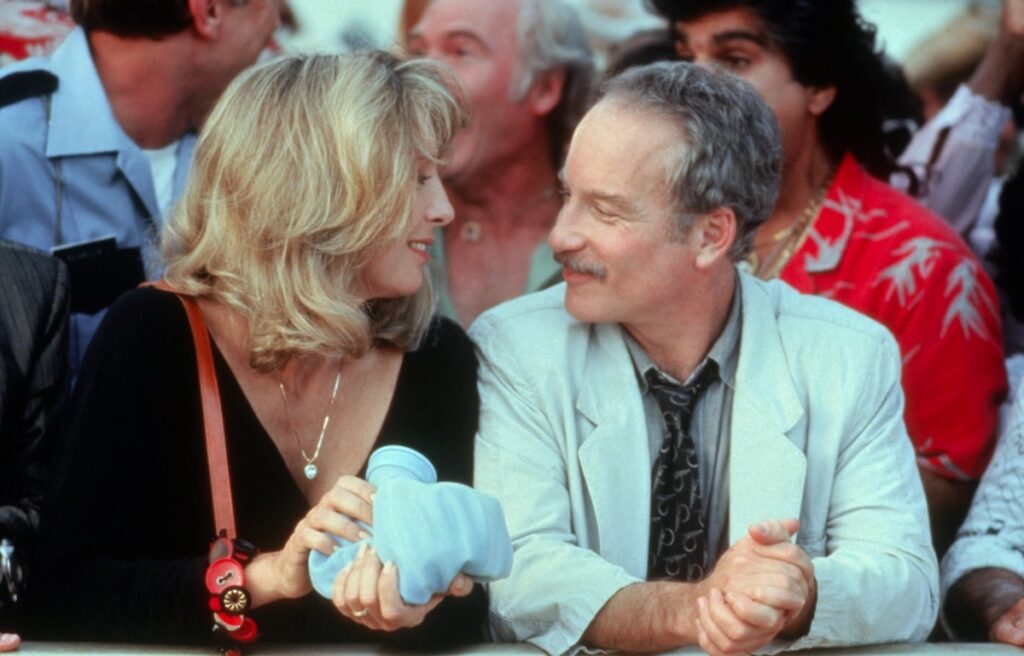 In 1989, Cronley’s second novel, Good Vibes, was adapted as a film called Let it Ride. Both follow a day in the life of an inveterate gambler named Trotter (because he mostly bets on horse races), and more or less follows the pacing and rambunctious structure of Funny Farm, though to different ends. In Good Vibes, the reader isn’t following a man who can’t win, but rather a man who can’t lose. Playing a tip his friend and fellow cabbie Looney surreptitiously picked up from a fare one night, Trotter spends his day at the track on a winning streak like no professional gambler has ever experienced. Of the three Cronley novels I’ve read, Good Vibes is my favorite, in part because he really indulges in his penchant for long, funny digressions about past events and characters, which can only partly be justified by plot mechanics, but which are otherwise justified because they’re simply funny and entertaining. The best example of this is Cronley’s explanation for why the glass shield separating the cabbie from the backseat passenger has a sign that says it’s bulletproof, but actually isn’t.

And Let it Ride, the film version, is wonderful, too. Anchored by a top-notch manic/subtle performance by Richard Dreyfuss as Trotter, Let it Ride is the closest to Cronley’s style and sense of things out of all three movies (it’s also a very unlikely picture, in that it was very ably directed by Joe Pytka; Pytka’s only other feature credit is Space Jam). The cast is filled out with David Johansen, Jennifer Tilly, Allen Garfield, and Teri Garr, and the whole thing is just a damn delight. 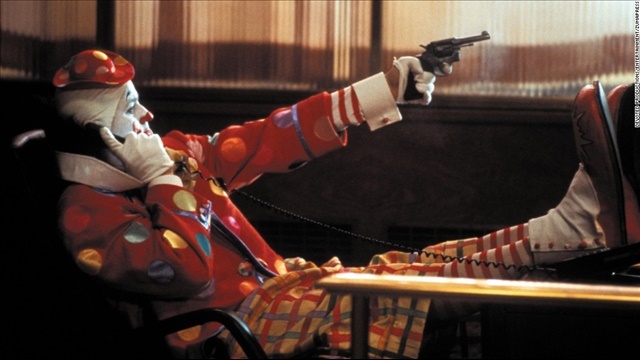 The most perplexing of the three film adaptations under discussion here is probably Quick Change (1990). Based on Cronley’s 1981 novel of the same name (and previously adapted as a French Canadian production starring Jean-Paul Belmondo in 1985, as Hold-Up) the film was written by Howard Franklin, and co-directed by Franklin and star Bill Murray. I remember seeing Murray promoting the film on Letterman, where he talked up Cronley as a good and funny writer, and how he took the role of co-director to help get the movie off the ground. But reading the novel and watching the film in close proximity to each other, what struck me was how the jokes in the movie were almost completely different from those in the book. The premise, briefly, is that three New Yorkers—Grimm (Murray), Phyllis (Geena Davis), and Loomis (Randy Quaid; his name is Lackey in the book, and the only reason I can see for the change is that Randy Quaid looks like a Loomis)—rob a bank, and escape by disguising themselves as hostages. They then spend the rest of a torturous day trying to get out of the country. Quick Change is similar to Funny Farm in that a lot of the entertainment value comes from watching everything fall apart for these three people (among the notable differences between novel and film is the respective endings).

But back to the jokes. In fairness, a lot of the jokes specific to the film seem more like movie jokes, which, had Cronley thought of them, would have probably lay flat on the page. For example, there’s a scene where Murray, in hostage disguise, tells the cops outside the bank how psychotic the lead bank robber (which, of course, is also him) is, and quotes some of the horrible abuses he was willing to inflict on Phyllis. It’s all so ridiculous, and the humor so performance-based, that I don’t know how prose could achieve the same effect. Similarly, in the book the police chief Rotzinger (Jason Robards in the film; this thing really has a hell of a cast) follows up dozens of leads, including a motel clerk who talks his ear off about the epic novel he’s trying to write, would Rotzinger read it and give him notes, etc. This character appears late in the novel, we get his full backstory, he appears again and again, and has no bearing on the plot whatsoever. This would never fly in a movie, but it’s part of Cronley’s signature style, and I’m glad it’s in the book.

The upshot, though, is that I find the film Quick Change to be much funnier than the novel. Oh well, these things happen sometimes. Cronley was a gifted and unusual comic novelist, which perhaps explain why in the late 1980s there was a brief surge of major film productions based on his work, and also why nobody went to see them. Gifted is one thing, unusual is something else again entirely. And now it can be very difficult to find his books at anything close to an affordable price—I’ve seen them go for $100. Currently the situation isn’t that dire, and you might luck out and find a cheap one. (Hurry on over to AbeBooks before this sure-to-be-viral essay drives the price up again.) If you ever do, I urge you to take advantage. I get the sense that there’s a group of die-hard Cronley fans out there, who do what all such fans do when they get hold of a good thing: they hoard it.