It feels slightly weird just to type this, but: Is Paul Thomas Anderson the modern master of the romantic comedy?

When we think “romcom” we think ditzy dames chasing guys who barely notice them, or maybe business-minded women realizing that there’s more to life than the 9 to 5, or possibly competition between the two for a guy somewhere in the spectrum between Dermot Mulroney and Dylan McDermott.

The romcom is a defunct form in theaters, having migrated to Hallmark (where ladies learn the errors of their ways, usually during Christmas in a hometown far from the hustle and bustle of the cities) and Netflix (where the same sort of thing happens, but the cast is usually a little younger and more diverse and the movie or TV show is 20 to 40 percent too long). It’s just less embarrassing to watch this sort of thing on your couch curled up in a slanket with a bottle of chard nearby while live-texting the proceedings with your friends.

Meanwhile, Paul Thomas Anderson’s two most recent films are, well, romantic comedies. No, Phantom Thread and Licorice Pizza are not structured in your typical romcom fashion. That said, they are about people finding each other and finding more in themselves than they do separately. They are quite funny. And they are continuations, in a way, of the work he started in Punch-Drunk Love. 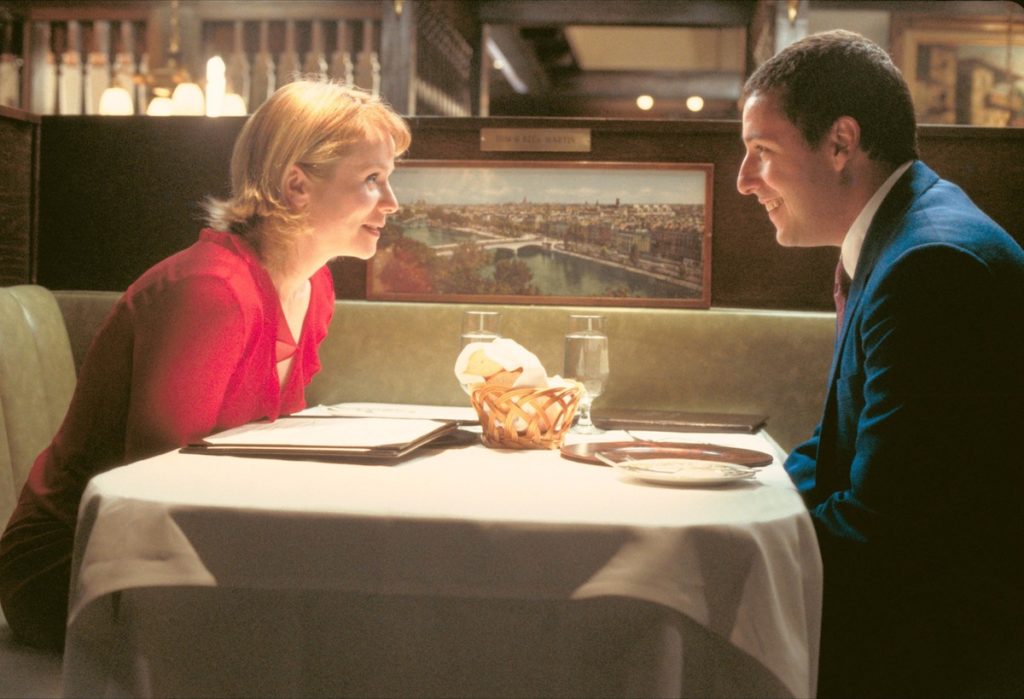 Watching Punch-Drunk Love on its surface level is, undoubtedly, a frustrating experience for some. What are we to make of Adam Sandler’s apparently autistic Barry Egan, the harmoniums that randomly appear on street corners, the weird scams involving Healthy Choice pudding and airline miles, and the weirder scams involving phone sex and mattress salesmen?

But looking at it from a slightly different perspective, you realize it’s a pretty clear deconstruction of the romcom genre and the fact that living in a world where, say, someone who was in the habit of making bizarre plans and prone to random fits of violence when he was unable to control his emotions wouldn’t be funny or cute but terrifying. Still, it is at heart a movie about the heart and trying to find someone with whom to share it.

Phantom Thread is, similarly, about a difficult person trying to find someone with whom to settle down. I’ve written about this before, but the whole thing didn’t click for me until I realized it was, yes, a romantic comedy. A blackly comic romantic comedy, one with a few languid stretches and a handful of poisonings. But it is a film about relationships, about finding the people who complete you, about ignoring the fact that their teeth scrape on their forks while they’re eating.

Which brings me to Licorice Pizza, out in theaters everywhere. As the film opens, 15-year-old Gary (Cooper Hoffman) is awkwardly but confidently hitting on Alana (Alana Haim), the 25-year-old assistant aiding in the taking of yearbook photos at his school. When he gets home from school that day, he confidently tells his brother that he met the girl he’s going to marry someday. The two meet for dinner and commence hurting each other just enough and just frequently enough to realize how much they care for each other.

Describing the plot of Licorice Pizza beyond that is not of much use; it’s a hangout movie, a slice of life, a chronicle of how time is spent and who it’s spent with and how much that specific stretch might mean to you and those around you. Gary is a serial entrepreneur, always looking to make a buck. Whether it’s as a child actor or running a publicity firm with his mom or opening a waterbed store or popping up a pinball parlor, he’s always hustling, always on the prowl. Alana, meanwhile, gets caught in his wake, coming along for a series of his schemes and trying to figure out if it’s weird she’s hanging out with Gary and his 15-year-old friends.

It is a little weird, frankly, and there has been some discussion about the age-appropriateness of this pairing. Understandable, to an extent, but their relationship is practically chaste and “younger guy falls for older gal” isn’t exactly an uncommon phenomenon among kids getting their drivers licenses for the first time. The push and pull between Alana and Gary gives the film its momentum: her initial rejection of him; the hurt she feels when he finds a more age-appropriate romantic interest; the hurt she returns when flirting with actor Jack Holden (Sean Penn) in front of Gary at the site of their first “date.”

In his book-length essay An Experiment in Criticism, C.S. Lewis saves some scorn for the unliterary reader focused on plot at the expense of all else. “He reads only narrative because only there will he find an Event,” Lewis writes. “As the unmusical listener wants only the Tune, so the unliterary reader wants only the Event.” Licorice Pizza, much like Phantom Thread and even Punch-Drunk Love, is not a movie overly concerned with the Event; it is a film in which the camera helps us fall in love with actors who are not, shall we say, traditionally beautiful. It’s a movie about the look of Encino, California, about the feel of the 1970s, about oil embargoes and Shabbat dinners and finding your place in the world.

And finding who you want to live with it once you find it, of course.