Martin Scorsese’s Movies Are Funnier Than Most Modern Comedies

The other day, I caused a mild ruckus on Twitter when I posted the following:

I didn’t expect anything to come of this, but it got a reaction. Some of the people who replied agreed with me, while others—they often turned out to be people who worked in comedy—most vehemently did not. And, mea culpa, I do regret the use of the word “genuine,” as it made the rest of the tweet come off more snobbish than I’d intended. Naturally there are any number of film directors who are, or were, either comedians or comedy writers, and whose movies are excellent, as comedies and as movies. All the Monty Python films are rather beautifully made, for example, though by and large comedies, even the great ones, don’t employ that kind of flash, likely because that sort of thing could get in the way of the jokes. And I don’t want to be misunderstood: comedies don’t need to be “deep,” whatever that means. The only thing I ask of them is that they be funny. There’s no emotion behind the jokes in Monty Python and the Holy Grail, and I bow to no one in my love of that film—it’s just a wonderfully funny and ridiculous movie. It is also extremely well-made. And of course sublime craft in comedy films has always existed: in the silent and studio eras, you also had directors like Ernst Lubitsch and Billy Wilder and Buster Keaton whose artistry behind the camera can stand alongside anyone’s.

Albert Brooks is a modern filmmaker whose craft is as good as his comedy. Consider how Brooks uses the cameras that are inherent to the plot and style of his first movie, Real Life. In the absence of a better term, Real Life is a “mockumentary,” but it’s more thoughtful in terms of the justification for what the audience sees than pretty much any other film of its sort, and certainly more than any found-footage movie I can think of. 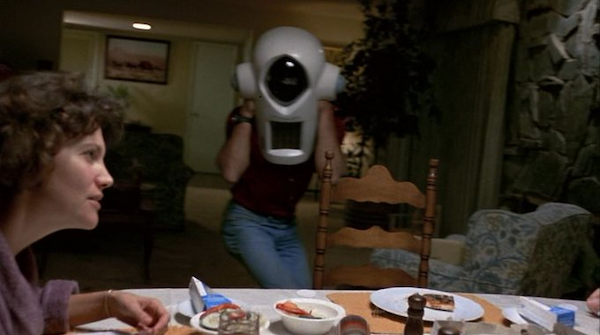 First, there’s the Japanese-made wall-mounted heat-sensitive cameras, “but to catch what those can’t,” you have the Ettenauer 226-XL, an unwieldy, absurd-looking contraption that fits entirely over the head of the camera operator. These both justify a myriad of shots that a real documentary probably couldn’t get, and also, in the case of the Ettenauer, add jokes. That cameraman sweeping by the dinner table, for one, but better yet is the shot of the cameraman slipping past Francis Lee McCain and out the front door, which is both a funny image and also justifies the shots in the front yard we see after that. It’s worth noting that both of these scenes involve domestic tension between McCain and her husband (Charles Grodin), sparked by Brooks’s character and his documentary crew, which these shots both somehow heighten and defuse.

Nothing like that kind of ingenuity can be found in the new films by two of the most successful comedy directors working today. I’ve already touched on my feelings about Adam McKay’s Don’t Look Up in my piece on the Best Picture nominees but shortly after my tweet the new Judd Apatow movie, The Bubble, about a group of Hollywood actors and filmmakers stuck in a fancy hotel while trying to make their latest in a series of action blockbusters as their nerves fray due to their isolation, dropped on Netflix. The comedic aesthetic behind the picture seems to be to cut every fifteen minutes or so to a montage of all the characters dancing. At some point in Hollywood’s comedy evolution, “people dancing energetically” apparently started counting as a joke. In addition to this, the film’s overall structure and satiric purpose, out of touch and toothless as it is, feels lifted wholesale from Ben Stiller’s Tropic Thunder. That movie also relies on “people dancing energetically” for a laugh, but far less often, and anyway is generally much better. But that movie came out 14 years ago. Things have changed.

Yet the main purpose of my tweet was not to bury, but to praise. (And for the record, both McKay and Apatow have made movies I enjoyed.) The point I was really trying to make was that there are certain filmmakers who are not generally considered comedy directors, like Martin Scorsese, whose work has made me laugh much more, and more consistently, than just about any traditional comedy in at least the last twenty-odd years.

Other directors fit this description—Quentin Tarantino’s last film, Once Upon a Time … In Hollywood, is essentially a comedy straight through, and I mentioned Paul Thomas Anderson in my tweet—but regarding the issue at hand, I believe that Martin Scorsese is particularly illuminating. Scorsese’s movies have always been funny (interestingly, Albert Brooks plays the comic relief character in Taxi Driver, though even there he’s not the only funny part of that, well, blood-soaked nightmare of a film); off the top of my head, I can’t even think of an exception. Maybe Kundun. But pretty much all of them have a laugh or two. Not so unusual, perhaps, because most films have a joke here and there, or try to, but Scorsese is interesting in the way he goes about it. He’s rarely pushing for the laugh; in his funniest pictures, he lets the natural behavior of his often unlikable, often stupid—or, if not actually stupid, at least utterly lacking in self-awareness—characters draw the laughter naturally from his audience. A favorite scene of mine is this one from Casino (1995), in which Vinny Vella plays a low-level mobster complaining like a fool about all the mob stuff he has to do, not realizing the FBI has put a wiretap in his store. His mom (played with effortless charm and humor by the director’s own mother, Catherine Scorsese) occasionally interjects with her own complaints, not about his criminal activity, but his swearing: “I didn’t curse, I said ‘freakin head.’” “That’s enough!” In addition to everything else going on in this scene—which is actually quite important to the plot, even if the characters barely appear over the course of the movie’s three-hour run-time—the audience is watching this mother/son dynamic at its most absurd. In a McKay movie, you could imagine one of the characters turning to the camera and explaining, in detail, which laws they were breaking to really hammer home just how funny this moment is. Here, however, it’s simply observed behavior with a light voiceover, but it’s one of the funniest scenes in Scorsese’s entire filmography.

Of course, Scorsese has made at least one straight comedy, of an appropriately black sort, and a very funny one at that—After Hours from 1985—and more recently he directed The Wolf of Wall Street (2013), a film that earned some chuckles simply for being nominated in the category of Best Picture Musical/Comedy at the Golden Globes. But what is The Wolf of Wall Street if not a comedy? For all its blood-curdling cynicism—despite what some particularly silly people in the world of film criticism seem to believe, Wolf practically defines the phrase “depiction does not equal endorsement”—seeing that film in the theater (on Christmas day!) is one of the most uproarious audience experiences I’ve ever had. Take, for instance, the scene in which Jordan Belfort (Leonardo DiCaprio) tries to make his way down some steps, to his car, while completely zonked on Quaaludes. He’s so debilitated that he can’t even walk, and as a result the process is drawn out for several excruciatingly funny minutes. The patience necessary from everyone involved to get this on film, and the faith that the audience wouldn’t simply get up and leave, is not to be found in today’s more traditional comedies (and incidentally, in the theater, no one, including my wife and myself, could stop laughing—tears, headaches, the whole bit—but the scene takes on an almost eerie, if no less funny, quality when watched at home, alone, on Blu-ray). By casting him in Don’t Look Up, Adam McKay apparently understood that DiCaprio has become one of Hollywood’s most gifted, if unlikely, comic actors, but betrayed his own lack of imagination by not asking the actor to actually use those gifts. 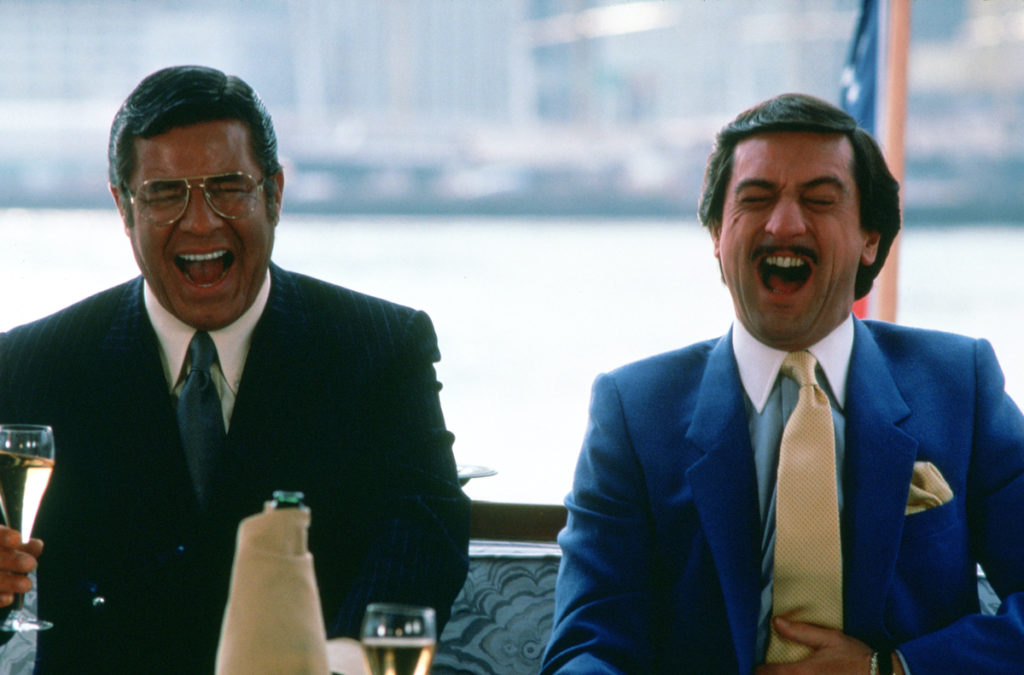 Eagle-eyed viewers, and those who object to what I’m getting at here, may wish to point out that The Wolf of Wall Street does include its own “people dancing energetically” scene that is played for laughs. I have no choice but to admit that this is true, but I’d argue in the case of the Scorsese film there is at least an extra layer to it, which is that by that point in the story the audience is aware that all of these guys are basically complete dorks, and for all their financial success, their confidence is unearned. Such is not the case when The Bubble starts piling on these scenes, or even Tropic Thunder, though the latter film comes closer to being on the right side of history. In other words, there’s a lack of specificity to the characters in most modern comedies. The reason Scorsese’s The King of Comedy (1982) is funny isn’t because Rupert Pupkin’s jokes are any good (well, “Hit me, hit me. What’s the matter with you? Don’t you want to graduate?” isn’t bad) but because the audience comes to know him. His “Pride & Joy” bit sucks, but the comic timing created by Scorsese, Robert De Niro, and Catherine Scorsese when Pupkin is trying to record an introduction to his talk show that doesn’t exist, only to be constantly interrupted by his mother, is so exquisite that it’s very difficult to believe that a career in comedy isn’t what all of these people have been working toward their whole lives. But crucially, that moment is also pitiful. Pupkin is pathetic. The laughter is impossible to hold back, but we’re not laughing with the character. Pupkin will eventually do some things the audience can’t, or anyway shouldn’t, get behind, but in a sense our laughter, what he would consider “bad laughs,” pushed him there.

I still laugh every time.