Alex Garland’s Men isn’t a subtle film, which isn’t the same as saying its point is obvious or easily scrutable. Part folk horror, part body horror, part psychological thriller, it’s a mishmash of wayposts and portents that very clearly wants us to know that Something Is Wrong With Men. What, exactly, that Something is? Well . . . there are lots of options. Have you been on Twitter recently?

Geoffrey is the first of several archetypes Harper will discover in this village, all of them played by Kinnear. A strange nude man following her out of the woods; a cop who doesn’t believe her when she says she was threatened by said naked wanderer; a snotty kid who calls her a bitch when she won’t play hide-and-go-seek with him; some toughs in the local pub; and a vicar who suggests, rather directly, that she’s to blame for her husband’s suicide. Can she forgive herself from driving him to it?

“Do you prefer things to be comfortable or true?” the vicar asks when she is offended by the suggestion she’s to blame. Needless to say, the film is filled with this sort of designed-to-provoke lines, the little things men say to women to manipulate them, to get their way. I might have snorted when the snotty little kid said “You’re so mean” to Harper, in part because it’s accompanied by a semi-horrifying visual from the final 30 minutes after things go truly bonkers. 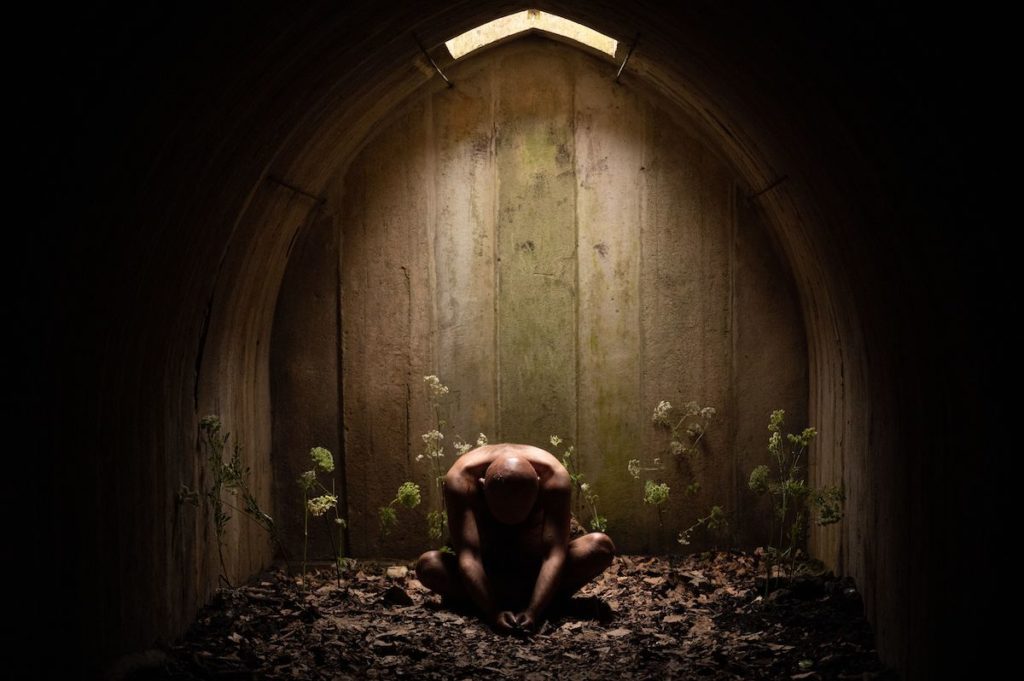 I suppose the key figure is Naked Rory Kinnear, an incarnation of the Green Man from European myth. As the film progresses, Naked Rory Kinnear sprouts leaves, branches and twigs jutting out from his face. Traditionally a symbol of renewal and rebirth, this masculine form of pagan energy is, quite literally, a form of renewal and rebirth in Men. A self-propagating, almost recursive, explosion and expulsion of male weakness and frailty and vanity and cruelty, this delivery isn’t cleansing or hopeful, as the new leaves each spring are. It is, instead, just kind of . . . pathetic.

Buckley is fine as the suffering Harper, but this is a movie about men and, as the man playing the men, Kinnear—probably best known to American audiences as the blackmailed prime minister in the porcine pilot of Black Mirror—really steals the show. He cycles flawlessly through an entire troupe of British types, from the stuffy land-owner to the brusque cop to the publican pulling pints at the local green man. They all bring their own varieties of menace to the proceedings, each a bit different from the one before.

Men is, all told, a fairly odd movie, as you might expect given the fact that one actor is playing multiple facets of what can only be described as The Case Against Men. The shift to full-on horror in the final 30 minutes is fairly jarring and not without merit; it is cringe-inducing without being cringey, if that makes sense. Still, I can’t help but wonder if the final act doesn’t spiral completely out of tonal control and into the territory of camp. I ask, because that last section is awkwardly funny, and I can’t quite tell if it’s intentionally funny—as Garland’s films often are; Ex Machina is both a serious examination of man’s creative and destructive impulses as well as being an occasionally gutbusting hang-out comedy—or unintentionally funny.

Apologies if I’m being a little . . . roundabout in my descriptions. I don’t want to give it all away before you have a chance to see it. After all, spoilers remain the one sin for which no man can be forgiven.