And which issues matter most to voters watching the Senate and gubernatorial campaigns.
by Brent Orrell
Democratic candidate for U.S. Senate Lt. Gov. John Fetterman, D-Pa., speaks during a rally at the UFCW Local 1776 KS headquarters in Plymouth Meeting, Pa., on Saturday, April 16, 2022. (Tom Williams/CQ-Roll Call, Inc via Getty Images)
Share on Facebook Share on Twitter Share via email Print

Pennsylvania’s statewide campaigns have begun to swim into focus now that the Republican primary for the U.S. Senate seat being vacated by retiring Sen. Pat Toomey is (finally) resolved following a recount. The results of a USA Today/Suffolk University poll conducted June 10-13 show that the news for Democrats is a lot better than they have any right to expect—and strange in ways requiring some explanation and speculation to interpret.

First the topline. Democrat John Fetterman is comfortably ahead of TV personality Dr. Mehmet Oz, leading in the race by 9 points, 46 percent to 37 percent. Considerably less comfortable is Pennsylvania Attorney General Josh Shapiro, the Democratic candidate for governor, who is ahead 44-40 over GOP State Representative/QAnon-adjacent/January 6th protester Doug Mastriano, a gap within the poll’s margin of error.

This is something of a conundrum. Why is either Democrat leading in the midst of $5-a-gallon gasoline, a looming recession, and international crisis and possible war? And why would a polished political figure like Shapiro running against a conspiracy-monger like Mastriano be having a harder time building a lead than the burly, medically challenged, and plainspoken Fetterman against an experienced and well-financed physician and professional communicator like Dr. Oz?

Let’s unpack it, shall we?

First the Senate contest. Oz has near-universal name recognition (better than Fetterman’s) but it isn’t helping him. Whether it’s his history as a sketchy TV doctor or a hangover from the primary, people don’t seem to like him much. His net favorability in the new poll is negative 22 points while Fetterman’s is plus 18. Oz’s sagging appeal really shows up “the red T” that occupies the geographical center of the state:

Fetterman isn’t winning “the T” but he isn’t losing by that much either. At the same time, Oz is a lot less popular in there than Doug Mastriano, whose net favorability is negative 2 points. Fetterman’s strong leads in Philadelphia (53-27) and Pittsburgh (50-28) mean Oz can’t underperform in “the T” this way and win. Oz is also faced with a no-win dilemma: Keep doing what he’s doing or hug Mastriano (which may hurt him with Philly and Pittsburgh suburbanites who dislike Mastriano even more than Oz) and hope for an aggressive Trump intervention to try to push up turnout among rural voters. This strategy failed for Trump in 2020, so the likelihood it will work for Oz this year is low. 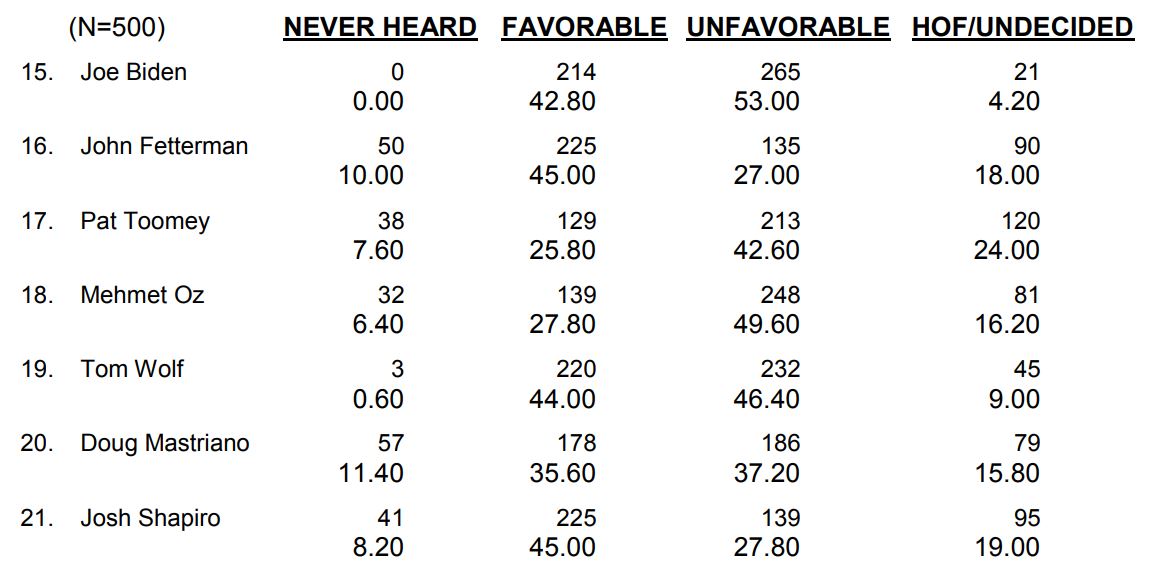 The Senate race holds up a mirror to the governor’s contest. Shapiro is way ahead in his native Philadelphia area, leading Mastriano almost 3 to 1. He is well ahead in Pittsburgh, too, where he leads 50-29. In “the T,” however, Shapiro is  several points behind Fetterman. It looks like the follically challenged Fetterman and Mastriano, are outrunning the blow-dry guys in rural areas where voters prefer candidates who look like they’d be comfortable eating red meat before attending a guns-and-ammo show. Shapiro is following the traditional urban Democrat race: hoping big margins in Philadelphia and Pittsburgh will be enough to offset huge Republican tallies in the rural and semi-rural counties.

The dynamics of the Shapiro-Mastriano race reflect the “normal” dynamics of races that Democrats often lose in Pennsylvania, especially in years, like this one, where Democratic turnout is down and energy in “the T” is high. That Shapiro is in the lead under these conditions is something of an anomaly. This year’s gubernatorial race is reminiscent of the 1994 Senate race in the state, when Rick Santorum knocked off incumbent Senator Harris Wofford. The race was shaped early by  the politically disastrous first two years of Bill Clinton’s presidency, which brought rural voters to polls in droves. Meanwhile, Senator Arlen Specter helped broker Santorum among suburbanites put off by the latter’s more rough-and-tumble conservative populism. (Santorum returned the favor in 2004, boosting Specter among rural pro-life voters and thus helping him secure his fourth term. By 2010, Santorum was gone and Specter switched parties in a failed attempt for his fifth re-election to the Senate.)

This year, Shapiro faces the Wofford dynamic: He’s weighed down by an unpopular incumbent president, a somewhat discouraged Democratic party (68 percent of Democrats are extremely/very interested in the race compared to 73 percent of Republicans), and a rural Republican base ferociously energized by Donald Trump’s election fabrications.

Fortunately for Shapiro, Mastriano’s conspiracism doesn’t seem to have much purchase outside “the T,” as demonstrated by responses to two polling questions included in the USA Today/Suffolk survey. First, respondents were asked whether they favored or opposed the repeal of Act 77, which allows for no-excuse mail-in voting. (Act 77 has been challenged in court and remains in effect while the state supreme court rules on the case.) Statewide, 43 percent of voters said they favored the repeal while 47 said they were against, but that figure breaks down somewhat differently by region, with Philadelphia voters much more strongly opposed to repeal than voters in any other region. A second survey question dealt with confidence about election security. Statewide, 59 percent of respondents said they were very or somewhat confident in election security. Even in “the T,” confidence is relatively high at 53 percent. In Philadelphia, 78 percent said they believed elections were secure while 62 percent said so in Pittsburgh. It seems that in Pennsylvania, election fraud is something of a “rump” position that may end up being aggravated by congressional investigations into the Jan. 6th sacking of the Capitol and growing public concerns about Trump’s role in perpetrating the rigged election hoax.

That brings us to the issues driving the campaign. Of the options given to respondents in the new poll, the economy is the top concern (22 percent say it is the most important issue). The next two biggest issues are guns (cited by 17 percent of voters) and abortion (14 percent). Again, a normie Republican or even a populist Republican with a normie at his side would probably be able to translate economic worries into a win, especially with Biden weighing down the ticket. However, the latter two issues, guns and abortion, are interacting with a pronounced gender gap in ways that seem to be muting the salience of the economy. Here’s how.

Shapiro leads among women 50 percent to 34 percent and has a net favorability among women of 9 percent compared to Mastriano’s 3 percent. Among women, the abortion issue is more important than the economy (23 vs. 16 percent) while gun issues are of equal concern to women relative to the economy (both issues score 16 percent as the most important issue). Philadelphia voters are especially concerned about guns (23 percent) and abortion (22 percent). This one-two social-issue punch may be washing out or at least counterbalancing worries about the economy.

Of course, Shapiro is completely at the mercy of economic developments; a sudden spike in unemployment might change the electoral calculus. It is also true, however, that Mastriano has zero ability to maneuver on issues like abortion and guns that are nonnegotiable with his rural base and probably matters of conviction for him. Meanwhile, the recent spate of high-profile mass shootings and the pending Supreme Court decision anticipated to overturn Roe v. Wade are keeping guns and abortion front of mind among moderate suburban voters. When the governor’s office may be the last thing standing between Pennsylvania women and a partial (or even complete) ban on abortion or the enactment of “constitutional carry” gun laws, these women voters are almost as constrained in their decisions as the candidates.

As I wrote last month regarding the California GOP, the price of the Republican party’s enthrallment to Trumpism is nominees who will have trouble closing the deal with suburban voters, especially in swing states. In Pennsylvania, this dynamic is proving particularly troublesome for Republicans who have nominated Trumpish eccentrics, albeit very different ones, for both statewide races. Even with the wind at their backs, there’s good (Mastriano) and very good (Oz) chances that these Republican candidates may get caught in traps of their own making in what would otherwise be a banner year.