The appearance of a conflict of interest on the part of a prosecutorial team would normally prompt outrage. Not so in Trump’s Justice Department.
by Kimberly Wehle
(Digital collage by Hannah Yoest / photos: GettyImages)
Share on Facebook Share on Twitter Share via email Print

Senate Republicans got what they bargained for in acquitting Donald Trump of obstruction of Congress and abuse of power. And they got it fast. Trump is now totally unleashed.

One week ago—last Wednesday afternoon—the Senate voted on the articles of impeachment.

Within 48 hours, Trump had fired a career public servant, Lt. Colonel Alex Vindman, from his White House job for telling the truth under oath to Congress. He had fired Vindman’s twin brother, Lt. Col. Yevgeny Vindman, from his own White House job despite his having no role in the impeachment. And he had fired Gordon Sondland, the ambassador to the European Union, who testified during the House impeachment proceedings. In a nod to Watergate, the firings were popularly dubbed the “Friday Night Massacre.” Trump has since suggested he would like to see Alex Vindman punished by the military for testifying before Congress.

Then, yesterday, the top brass at the Department of Justice apparently acted on what Trump called his “absolute right” to direct DOJ’s decisions and overrode a sentencing recommendation for his buddy Roger Stone. Stone, whose prosecution was one of several to arise from the Mueller investigation, was convicted in a federal court last November on five counts of lying to Congress, one count of witness tampering, and one count of obstruction of a proceeding. The prosecutors working on the case recommended on Monday that Stone be sentenced to seven to nine years behind bars.

And lo, by Tuesday morning the DOJ had announced it would be overriding its own prosecutors and recommending a shorter sentence for Stone.

The move prompted the stunning filings in federal court of four distinguished federal prosecutors seeking to withdraw their representation of the American public in that important criminal matter. They include Aaron Zelinsky, a top prosecutor in special counsel Robert Mueller’s probe of Russia’s interference in the 2016 election and Trump’s attempts to obstruct that investigation; and assistant U.S. attorneys Jonathan Kravis, Adam Jed, and Michael Marando. Kravis not only withdrew from the Stone case, he resigned from the DOJ as well.

This is a very big deal, to be sure. But it should surprise no one. When Senator Kamala Harris asked Attorney General William Barr if Trump had ever “suggested” that he open a criminal investigation into anyone, Barr—testifying under oath—stuttered, feigned to grapple with the meaning of the word “suggest,” and then blithely claimed that he didn’t know the answer to her very clear question. Now that a Senate majority has knowingly relinquished Congress’s constitutional obligation to keep the executive branch in check, it’s obvious why Barr didn’t answer Harris’s question. The truth might have gotten his boss in political—or even legal—trouble. But now, Trump is free to smash the longstanding norm of DOJ independence out in the open.

Of course, this president’s abuse of the massive powers of his office will continue because he knows that there is no one within the federal government who is able or willing to stop him. The implications of this new normal were made very clear to every sitting member of the U.S. Senate. In the trembling words of Rep. Adam Schiff, “a president free of accountability is a danger to the beating heart of our democracy.”

DOJ’s switcheroo regarding the Stone sentencing recommendation is extraordinary for a simple but frightening reason: Favoritism or retaliation in criminal investigations and prosecutions on the basis of political affiliations is the essence of tyranny. DOJ’s internal prosecutors’ manual states that the “attorney for the government should make sentencing recommendations based on an individualized assessment of the facts and circumstances of each case . . . without improper consideration of the defendant’s . . . political association, activities, or beliefs,” and instead in promotion of “respect for the law.”

Though Trump claimed on Tuesday that he didn’t speak with DOJ about Stone, even his devout supporters admit that he lies. In signature Trumpian style, his abject self-interest is once again unveiled and accomplished with impunity—this time through the federal agency charged with enforcing the nation’s criminal laws.

The withdrawal of these prosecutors from the Stone case is deeply disturbing. Like Alex Vindman, Marie Yovanovich, and Gordon Sondland, the three of these prosecutors who, for now, plan to remain with the government can expect to be sidelined or pushed out for standing up to this president. In all likelihood, the people who fill their shoes will—like Bill Barr—be chosen for their willingness to answer to Trump-the-man first and the American people a distant second.

To those who continue obdurately to insist that Trump is no danger to the American system of government, let’s not forget the now-infamous argument of his impeachment counsel Alan Dershowitz: “If a president does something which he believes will help him get elected in the public interest, that cannot be the kind of quid pro quo that results in impeachment.” In Donald Trump’s eyes, he is the law in America now. 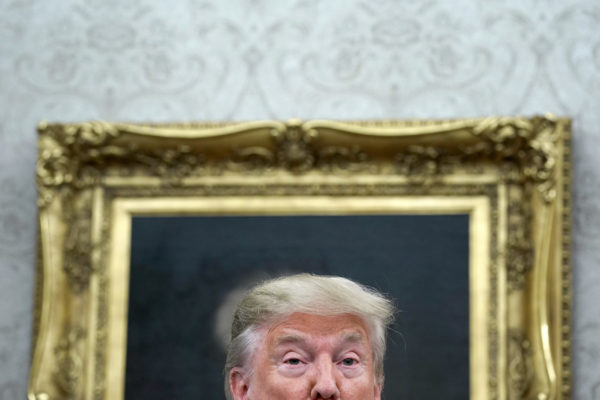