On Wednesday, 15 Republican senators held a press conference to criticize President Biden for insufficient boldness in Ukraine. John Kennedy likened the president to “Bambi’s baby brother.” Ben Sasse accused the administration of treating the war like a “nerd-lawyer” dispute, not “a moral battle.” John Cornyn sternly declared, “The Biden administration’s timidity in the face of this evil needs to end.”

From Richard Nixon in 1968 to Mitt Romney in 2012, this is how Republican politicians talked about foreign policy: They were the party of strength, and Democrats were the party of weakness. But that formulation is no longer true. The GOP, as measured by the expressed beliefs of its voters, has become the more dovish party.

For more than a century, Republicans have had an isolationist wing. The power of that faction has waxed and waned. But in the Trump era, for the first time since before World War II, it has taken over the party.

In an Echelon Insights poll taken from February 19 to 23, as Russian troops surrounded and prepared to invade Ukraine, most Democratic voters affirmed that “It’s best for the future of our country to be active in world affairs.” Republicans, by a ratio of 2 to 1, chose the alternative answer: “We should pay less attention to problems overseas and concentrate on problems here at home.” In the same poll, 47 percent of Democrats said human rights should be a top priority in foreign policy. Only 27 percent of Republicans agreed. 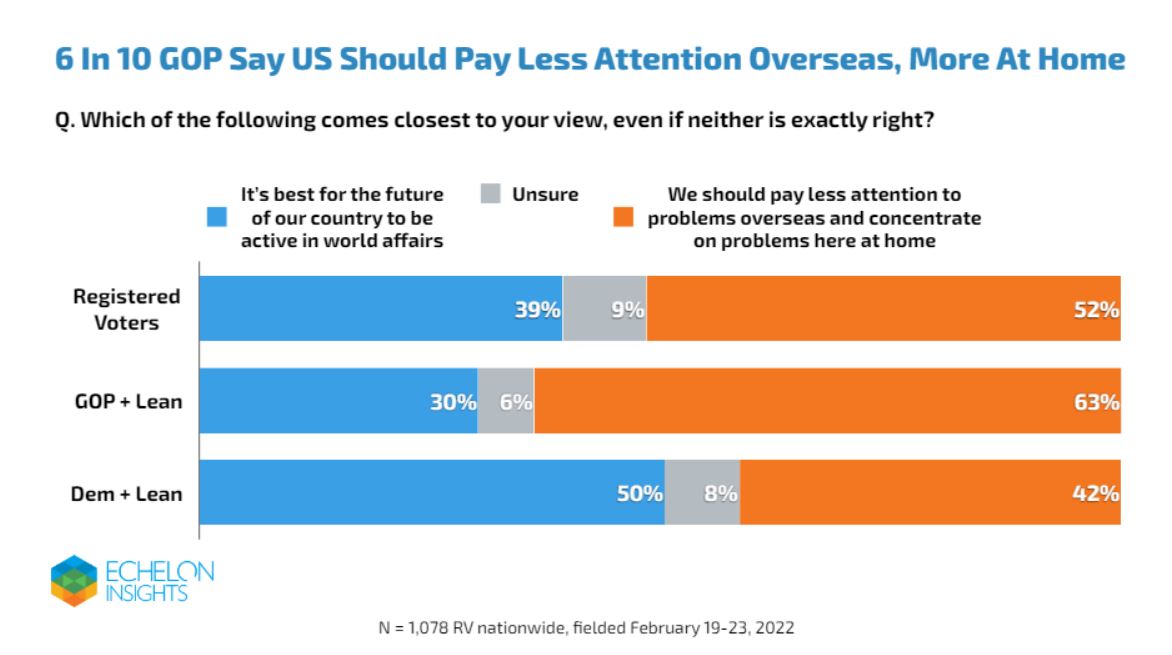 Republicans aren’t just less interested than Democrats in fighting for universal values, such as democracy. They’re also less likely to support allies. In the Echelon Insights poll, Republicans were less willing than Democrats to “provide military support to defend allies’ security” or to “participate in and provide resources to international military alliances like NATO.”

This rising isolationism on the right has converged with Trumpist sympathy for Russia and hostility to Ukraine. When former Vice President Mike Pence said there was “no room in this party for apologists for Putin,” he was talking—whether he knew it or not—about a faction that does, in fact, take up significant space in the GOP. Even during the invasion, Putin’s favorable rating among Republicans has reached 14 percent, 15 percent, and 18 percent in some surveys—more than twice as high as his favorable rating among Democrats. Republicans are more likely than Democrats to affirm that Putin is a “genius,” that his conduct of the war is justified, and that the best outcome would be a Russian victory.

On average, only about 10 percent of Republicans openly express such pro-invasion views. But they’re joined by a much larger group of Republicans who are hostile to or wary of Ukraine. This is the result, in large part, of Trumpist propaganda that for years has accused Ukraine of pervasive corruption and electoral sabotage against the GOP.

In February, these sentiments—isolationist, pro-Putin, anti-Ukraine—combined to divide the GOP over whether it was more important to “take a strong stand so that Russia does not take over Ukraine by force” or, alternatively, to “maintain good relations with Russia.”

Today, Republican politicians say Biden should have sanctioned Russia and sent more weapons to Ukraine before the invasion. But that wasn’t what Republican voters thought. In the Yahoo News poll, only 40 percent of Republicans supported sanctions against Russia, even after they were told that “more than 100,000 Russian troops are massing on the border of Ukraine, threatening an invasion.” In weekly Economist/YouGov surveys, Democrats clearly favored weapons shipments to Ukraine, but Republicans were evenly divided. A Washington Post/ABC News poll found that if sanctions on Russia entailed higher energy prices in the United States, 62 percent of Democrats would still support them, but only 44 percent of Republicans would go along.

Many Republicans preferred appeasement. In early February, when an Economist/YouGov survey asked about Sen. Josh Hawley’s proposal “to stop supporting Ukraine’s prospective membership in NATO,” more Republicans supported that idea than opposed it. Most Democrats, however, said the United States should continue to support NATO membership for Ukraine.

As Biden moved to fortify Europe against the Russian threat, Republicans opposed him. In mid-February, a Quinnipiac survey informed respondents that Biden had “approved the deployment of thousands of troops to Eastern Europe to support U.S. allies in NATO, such as Poland and Romania.” Seventy percent of Democrats endorsed the deployment. But a plurality of Republicans, 47 percent to 43 percent, rejected it.

The Republican resistance wasn’t just about Biden. A Suffolk poll, also taken in mid-February, found that Republicans were significantly less likely than Democrats to support every kind of intervention: sanctions, military aid, troops to the region, and troops to Ukraine. Twenty-two percent of Republicans, compared to 9 percent of Democrats, said the U.S. should do nothing.

Echelon Insights found a stark partisan divide when it asked voters to choose between interventionist and isolationist statements. Most Democrats, 56 percent to 31 percent, chose this statement: “The United States has a moral responsibility to protect Ukraine and other democratic allies from aggression and invasion, even if it means sending military aid or deploying troops.”

But most Republicans, 51 percent to 39 percent, chose the alternative statement: “The United States has more important issues to focus on at home than sending military aid or deploying troops to deter a potential Russian invasion.”

Today, weeks into the war, the partisan gap persists. In nearly every survey, Republicans are less willing than Democrats to sanction Russia, sanction Putin, ban the importation of Russian oil and gas, “send weapons and supplies to Ukraine,” help Ukraine “obtain more fighter jets,” send troops to Ukraine (even in non-combat roles), “shoot down Russian military planes flying over Ukraine,” or conduct “air strikes on Russia.” They’re less willing to support or participate in boycotts of Russian products, and they’re more willing to “promis[e] Russia that Ukraine will never join NATO.” 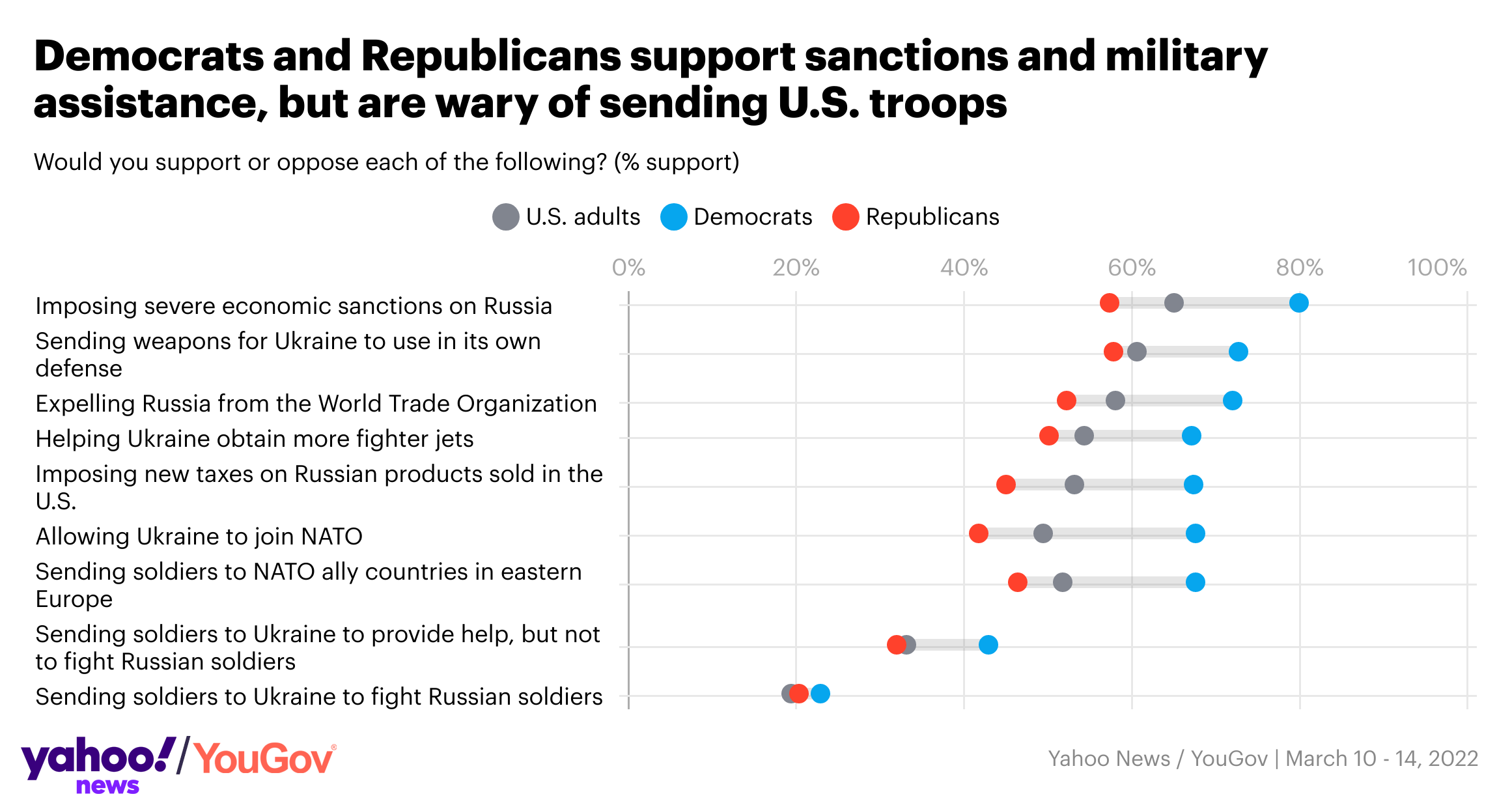 Nor does the partisan divide stop at Ukraine’s borders. In polls taken since the invasion, Republicans are less willing than Democrats to “maintain [our] commitment to defend NATO allies when they are attacked,” “send U.S. troops to protect NATO allies near Ukraine,” or keep “U.S. military forces in NATO countries near Ukraine.” Even when they’re told that “The U.S. and its European allies are obligated to defend countries that belong to [NATO] if they are invaded by a foreign power,” Republicans are less willing than Democrats to say we should respond with force “if Russia were to invade a NATO member state.”

Together, these numbers drive home an uncomfortable truth: As war returns to Europe, America’s soft underbelly isn’t in the Biden administration. It’s in the GOP.

The problem isn’t just that rank-and-file Republicans are relatively reluctant to stand up to Putin. It’s that they don’t recognize their own passivity. They still think they represent a muscular foreign policy. In every survey, they complain that Biden has been “too weak,” and they insist—more than Democrats do—that the United States must get “tougher.” But then, when they’re asked about measures that would actually get tougher, they flinch.

If Republican senators want America to stand strong against Putin, they should be talking to their own voters. That would be leadership. And it would be helpful, because no foreign intervention is sustainable without public support at home.

Instead, they’re cracking soundbites about Bambi and taking cheap shots at Biden. They’re talking tough instead of being tough. Just like their voters.