The aftermath of a horrific mass shooting is not the time one would usually turn to a humor site, and yet, the Onion had an insightful take on Uvalde. The headline: “‘No Way to Prevent This’ Says Only Nation Where This Regularly Occurs.” The piece quotes a fictitious citizen: “‘This was a terrible tragedy, but sometimes these things just happen and there’s nothing anyone can do to stop them,’ said Idaho resident Kathy Miller.”

And here’s the kicker—the Onion has run pieces with that same headline for years.

As I write, there are reports of yet another attack in Tulsa. Our mass shooting problem—there have been an average of two per month for the past 13 years —arises from a familiar stew of history, culture, law, and commerce. And certain facts loom large. Yes, we are among the most violent countries in the advanced industrial world, and have long been. Yes, guns have always been plentiful whereas mass shootings are a relatively new disease. Yes, mass shootings represent a small fraction of gun deaths in America. And yes, the Second Amendment makes limiting guns more difficult here than in Canada, Australia, or other places. Those are big, hulking obstacles to solving our problem. But there are other assumptions that are trotted out regularly in our hoary gun discussions that are less daunting than they appear.

Consider the matter of guns in circulation. We are often told that there are about 393 million guns in private hands in the United States—more than one per person. How then, some demand, can we expect to make a dent in the problem by instituting controls that affect only new gun sales? All that would do, they insist, is make it more difficult for law-abiding people to obtain guns, while criminals would always have easy access.

The sheer number of guns in private hands needn’t intimidate us into inaction. We have 289 million cars in America and manage to regulate, license, and control them in various ways. The number is not the point. It’s the laws that matter.

Like the Onion, the New York Times wearily highlighted the pattern in its coverage: 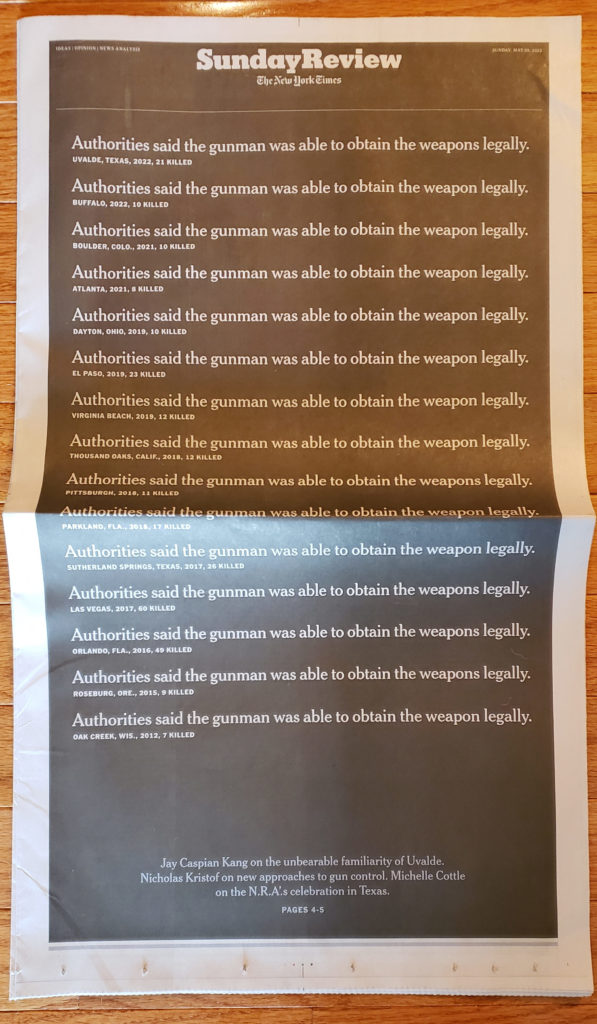 Of those 22 cases, there were just three that did not involve a legal sale to the killer: The Midland, Texas shooter purchased his rifle through a private sale before killing 7 strangers; the Santa Fe shooter, who killed 10 at his high school, used guns legally owned by his father; and the shooter who killed 26 people at Sandy Hook Elementary School in Newtown, Connecticut used guns bought by his mother.

Perhaps all of these killers would have been able to lay hands on guns already owned by individuals. Maybe. But it would have been much harder than walking into a gun store. In most cases, these killers are mentally unstable, impulsive, and socially maladroit. Purchasing a weapon via private sale would be more challenging.

So making it more difficult to purchase guns—say, by adding more complete background checks, increasing the minimum age to 21, requiring waiting periods, or adopting “red flag laws” that make it possible for family members or police to ask courts to have a person’s guns temporarily removed—would have inhibited the vast majority of the killers listed above.

Here’s another cliché that needs burial—the hunting culture. The misperception here tends to be among pro-gun control Democrats who don’t actually know any hunters and don’t have many in their urban districts but assume that “out there” scores of millions of Americans are shooting deer and pheasants every weekend. This leads some Democrats to mock those who buy AR-15s, as when President Joe Biden asked whether they think the “deer are wearing Kevlar vests.” In fact, hunting is in steep decline in the United States. Less than 4 percent of the population hunts, leading to worries about wildlife conservation. More Americans bicycle than go hunting. Four times as many sing in choirs. And vastly more—65 percent—play video games.

For good or ill, the rugged American guy out in a duck blind wearing camouflage is becoming, if not quite as endangered as the red wolf, nearly so. Hunting today is less an honored tradition than a boutique hobby.

Hunting is not the reason millions of Americans cherish their guns. Their reasons range from benign, like concerns about their safety, to insane, like stockpiling weapons for the coming apocalyptic battle between QAnon and the forces of darkness. But Democrats stumble when they play into GOP talking points about gun-grabbers. Beto O’Rourke’s pronouncements—“Hell yes, we’re going to take your AR-15s”—does more damage to the goal of reasonable gun control than the NRA can do in a year.

One more old saw that needs retirement: the mental health focus. I have written for years about the legal obstacles we’ve adopted that make it far too difficult to stop an unstable or dangerous person from obtaining or keeping a firearm. But the GOP is now hiding behind the “mental health” mantra to evade responsibility. It does no good to talk of improving mental health if 1) you have no intention of increasing funding, and 2) you refuse to adopt measures (like red flag laws) that would impinge upon the Second Amendment rights of even a small number of individuals.

A bipartisan group of senators is currently huddling in hopes of devising some kind of gun control compromise that can pass both houses. Godspeed to them. But I fear their efforts will fail in our ultrapolarized climate.

If we hope to unstick our politics and permit compromise and common-sense reforms for heart-wrenching problems, we’re going to have to reform the way we choose our leaders. GOP politicians don’t dance to the NRA’s tune for the money. They do it because that’s what Republican primary voters demand. And Democrats who grandstand about gun confiscation are appealing to their left flank—the voters who show up for primaries. In the matter of guns, as with other pressing national concerns, the solutions cannot be unlocked until the incentives facing politicians change—and that requires nonpartisan primaries.