There has long been a debate over whether or not “Never Trump” Republicans are a meaningful cohort. Election results keep suggesting that, at the electoral level, they are. Never Trumpers propelled the Democratic House victory in 2018 and Joe Biden’s victory in 2020, and they were also behind some of the Democrats who overperformed last week.

Let’s start with the House. In Colorado’s 3rd District, Don Coram, a Republican state senator, forced Lauren Boebert to go through a primary challenge. Coram garnered 36 percent of the vote in that primary, then flipped to endorse independent-turned-Democrat Adam Frisch in the general election. The district—which Nate Silver rated as having a 3 percent chance to flip—is still too close to call, with Frisch at 49.8 percent. Because of Never Trump Republican voters.

Then there were the ticket-splitters. A merry band of Mike DeWine voters also pulled the lever for Tim Ryan while some former Republican officials crisscrossed Ohio explaining why J.D. Vance wasn’t fit for office. While this group wasn’t enough to push Ryan over the top, a slate of state legislative candidates rowing in that Republican-recruiting direction helped Democrats win both close House seats (Nate Silver forecast: 16 percent in OH-1, and 19 percent in OH-13).

The odd truth about these midterms is that there actually was a red wave, both in who showed up (there were more Republican voters than Democrats) and in how people voted overall (Republicans will probably win the House popular vote by about 4 points).

But not all waves break the same. There’s a type of wave called—seriously—a dumper. You get dumpers when waves go from deep to shallow water, and so curl and crash down without running up on shore. The 2022 red wave was bigger than expected—but it took a big dump when it hit moderate Democrats focused on persuasion who were backed up by credible Republican Never Trump messengers.

Here’s a visual from Echelon Insights that shows most red districts performing above the line, before taking a dump when water got shallow in CO-03, ME-02 (Jared Golden), MI-07 (Liz Cheney–endorsed Elissa Slotkin), and other districts where courageous Republicans reached across the aisle to help overcome the Democratic party brand: 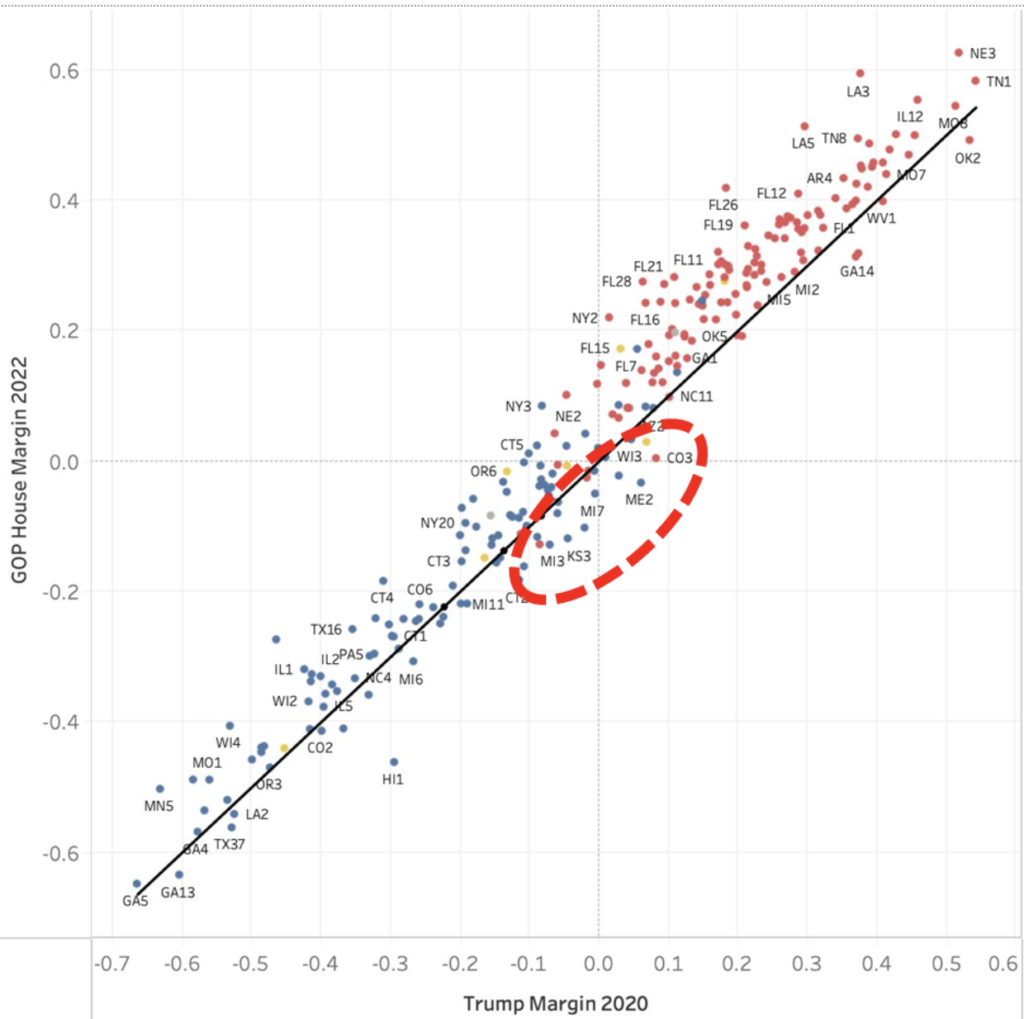 Last year I argued that “Constitution-minded Republicans swapping parties . . . may sound like a small, politically awkward, and far-fetched path to saving our democracy.” Unlike some third-party fairytales and other unicorns,

The viable path to saving our democracy is more like a platypus: An animal which sounds ridiculous when you describe it—a tiny seal with a duck beak, webbed feet, and a bushy tail?—but is, in fact, quite real.

Turns out, Never Trump Republicans going out to stump for Democrats didn’t even look that funny. Former GOP Chair Chris Gibbs looked damn good describing why Tim Ryan convinced him to join the Democratic party; Chad Mayes sounded great vouching for Will Rollins’ bipartisan credentials; Don Coram was a natural running against Boebert through the general; and the Liz Cheney show was glorious.

The big question for the GOP is whether or not the party can course correct before some percentage of these Never Trump Republican voters become plain old, moderate Democrats.

Liam Kerr is a co-founder of The Welcome Party, which engages independent voters and advocates for a big-tent Democratic party and later this year will be launching @TheWelcomePAC to support principled leaders in swing districts. Follow him @LiamKerr.