Two years after his odious views cost him his seat in Congress, he wants to justify, blame, and excuse.
by Jim Swift
BOONE, IA - AUGUST 13: U.S. Rep. Steve King (R-IA) speaks during a town hall meeting at the Ericson Public Library on August 13, 2019 in Boone, Iowa. Steve King, who was stripped of House committee assignments earlier this year after making racist comments spoke about immigration and the U.S. and Mexico border. (Photo by Joshua Lott/Getty Images)
Share on Facebook Share on Twitter Share via email Print

Walking Through Fire
My Fight for the Heart and Soul of America
by Steve King
Fidelis, 304 pp., $28

Steve King wants to settle some scores. The former GOP congressman, who was defeated in 2020 after his public remarks about white supremacy cost him his committee assignments and his fundraising, has been bitterly watching from Iowa as Kevin McCarthy, the House GOP leader, jumps through hoops like an inept gymnast to defend Republican representatives who are at least as rhetorically provocative as King was.

Between Lauren Boebert, Madison Cawthorn, and Marjorie Taylor Greene, among others, McCarthy has gotten quite a workout. If King were still in Congress, it is safe to say that McCarthy would be defending him, too.

In Walking Through Fire—a quasi-memoir released last month by Oliver North’s Fidelis Publishing—King sets out to demonstrate that he is not a racist. He also wants to write his political epitaph, which he rightly is worried the media will do for him.

Along the way, King airs grievances against those who he thinks secretly worked against him. The book is deeply conspiratorial, with an average of two highly implausible conspiracy theories spelled out in each of the 28 chapters. 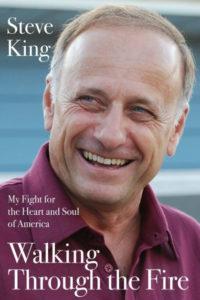 A major focus of the book is Trip Gabriel, who reported on King for the New York Times. Gabriel’s name and that of his publication appear in about every sixth paragraph. Nearly every chapter is in some way about Gabriel and the timeline he assembled in 2019 of King’s troubling remarks. King believes that Gabriel “sabotaged his career in one sentence” in an interview that resulted in an explosive January 2019 article. King feels it’s important to explain why he was unable to record his conversation with Gabriel—which would, he suggests, vindicate his version of the conversation. King says he had been taking a shower and so had not read texts from staffers who told him not to do the interview.

King at first thought that his 56-minute interview went well, but the published article included this incendiary line:

“White nationalist, white supremacist, Western civilization—how did that language become offensive?” Mr. King said. “Why did I sit in classes teaching me about the merits of our history and our civilization?”

King claims that Gabriel “heard what I said and knew what I meant” and that the article distorted King’s meaning and missed important context.

I’ve followed Steve King for years—first as a congressional staffer, then, as an editor and writer at The Weekly Standard. My friend and Standard colleague Adam Rubenstein reported on King’s troubling comments and associations, including remarks comparing immigrants to dirt, only for King to deny it, to call Rubenstein a “junk yard dog,” and to challenge us to release the audio. Which we did. (The Standard’s parent company deleted the video, but it has a permanent home here.) Presumably because we had the tape and released it, King leaves Rubenstein and this episode out of his new book.

King’s telling of his life story is interesting, if not inspiring. He was born in Storm Lake, Iowa in 1949, but moved around a bit. His dad was for a time the mayor of Goodell, Iowa, population 231—and then, not wanting “the city” to make his kids soft, he took a job managing the state police dispatch station and moved to a 26-acre parcel in a place called “Coon Grove.” King’s father didn’t graduate from college, and it doesn’t sound like his mother did either, but he regards them as great teachers and would put his dinner-table education up against anyone, he says.

King talks about hunting with his dad and eating his kills, as a good hunter should. (He also admits, for no reason in particular, that he killed two squirrels with a pocketknife, but does not reveal whether he ate them.)

When King was college-aged, he longed to be a park ranger, and later a smokejumper in Montana. But that wasn’t to be, as a letter back from the forestry service allegedly told him that not being from Montana and not having a degree from a local institution would likely sink his chances. Instead, he settled on studying biology at Northwest Missouri State.

For a summer job one year, King was working construction; the company’s owner sent him to Alaska to help build a 600-mile road adjacent to the Trans-Alaska Pipeline. King needed the money, and the job paid well—he made the equivalent of $65 an hour in today’s money. King never returned to college.

With a hold-up on the pipeline in the early 1970s, King returned home and married his high-school sweetheart, Marilyn. Wanting to help pay for her to finish college, he took a job as a superintendent for a construction company. He was yearning to head north again—to heed the call of the Alaskan wild, not to mention the call of the pipeline project and its cash—but his wife suggested that doing so would probably result in the end of their marriage, so King stayed in Iowa.

Educating himself by reading a variety of books at night, King was determined to chart the course of his own destiny by starting his own business. With nothing to his name, he bought a dinged-up Caterpillar bulldozer and started a business. He decided to announce it to his wife at 1:30 a.m. on a hot summer night—and she hit him with an announcement of her own: they were starting a family.

It’s not unusual in a memoir for the author to express regret or admit being wrong about something. But since the mission of King’s book is to prove that he was right about politics and his adversaries were wrong, he doesn’t offer any such candid admissions. The closest King comes to conceding he was wrong about something is in recounting an argument he lost to his father when he was young. He went to the high school library to prove his dad wrong about converting watts to horsepower. “That’s not what I’m talking about,” his dad replied. “A watt is a measure of electrical power. Horsepower is a measurement of mechanical power. You’ll look foolish if you equate the two!”

He does not concede any major mistakes on his part while recounting at length the legislative victories he never achieved, instead pivoting to attack those he believes sought to stop him. His targets are almost all Republicans. In case attributing his failures to his former congressional GOP colleagues doesn’t work, King reminds his readers that liberals play by different rules. Remember Robert Byrd, the late West Virginia senator who had a role in the KKK? Look over there!

King’s refusal to accept blame for either his meager legislative record or his racism is so steadfast that it takes on a tragic dimension. It is as though he knows he cannot be redeemed, but still wants to tell his side to whoever will listen. This poorly edited, chaotically organized book is basically a 304-page version of the bizarre statement he posted on Twitter after his political career came to an end on the orders of McCarthy, whom King lamely calls a “real modern-day McCarthyite.”

Weak punches like this don’t really land, especially considering the many ways McCarthy has beclowned himself since King lost his election. But they do occasionally combine two qualities of King’s—willful offensiveness and willful obtuseness—to achieve perfect toxicity. For instance, he asks if McCarthy might be “Rain Man” (read: autistic) because he told King he remembered everything he had said in interviews during the previous six months.

Other offenses are even more telling. King criticizes liberals for antisemitism but knocks Jewish Republican super-donors like Paul Singer for their efforts to defeat him. King goes so far as to single out the Republican Jewish Coalition, odiously suggesting that their “hidden agenda” was served by his eventual defeat.

There is a section on birtherism. King doesn’t openly claim that former president Barack Obama was a Manchurian candidate by way of Kenya, but he has some questions. He thinks the left subsidizes David Duke, and claims to have never heard of the “Great Replacement” theory even though he spends a large part of a chapter defending it.

In fact, King says that in the “literally thousands of Republican and conservative” gatherings he’s attended, he is not sure if he’s “ever met a white nationalist, let alone a white supremacist.” He is also unclear on the question of whether Peter Brimelow, publisher of VDARE, is a white supremacist. Why rely on others to poison the well of your credibility when you’re so eager to do it yourself?

Having been accused of racism (rightly) so many times himself, King can be quick to defend his Republican colleagues against the same accusation. This doesn’t stop him from condemning them on other grounds. He slams the press for deeming Mitt Romney’s 2012 campaign racist, but also excoriates Romney for suggesting King should resign from Congress. He defends Liz Cheney against an allegation of racism in the Daily Kos, but because she wouldn’t come to his aid when he needed it, he ultimately discards her. Even Steve Scalise receives a needling because he turned on King, too.

You get the sense that King is actually sad about losing these friends. But what’s sadder is that most of the folks he thought were his friends were very clearly not. A common expression in King’s book is “being fragged,” which is what happens when troops purposefully kill their own inept leader with friendly fire.

Fragged and alone, King is left to fixate on how he was quoted in Trip Gabriel’s item in the New York Times (where, King writes, “slander is the name of the game”), even pathetically questioning the placement of punctuation. He blames House stenographers for making the same punctuation “mistake” in the Congressional Record, too.

King’s political isolation would become total by the time of his non-censure rebuke in the House. The bill got one dissenter because it wasn’t harsh enough. (Those were the days!) King asks readers if they would have approved of his words if he had used “black” in place of “white.” If so, what he said and did was fine! Don’t just trust King: Mark Steyn agrees! Mark Steyn? Oops.

While it’s a long way from Mark Steyn to Booker T. Washington, King closes with a quotation from the latter:

Washington is right, of course, but it’s worth remembering that lies, wrongs, and evil aren’t transformed into truth by being accepted by a minority, either. Even an aggrieved minority of one.