Daniel Day-Lewis, arguably the greatest actor of our time, announced that he was retiring from acting in 2017 following the release of Phantom Thread, the excellent Paul Thomas Anderson film in which he starred. This is of course our loss, but perhaps fitting since five years previously Day-Lewis had already played the role of a lifetime, the kind of part that most actors would be well-advised to avoid entirely: that of Abraham Lincoln in Steven Spielberg’s 2012 masterpiece Lincoln.

The film had long been a passion project for the director. He’d obtained the film rights to Doris Kearns Goodwin’s Team of Rivals: The Political Genius of Abraham Lincoln, a portion of which is the basis for the movie, three years before the book was even published. At one time, Liam Neeson, the star of Spielberg’s Schindler’s List (1993), was set to play the 16th president of the United States, but that iteration of the project fell apart due to the director’s dissatisfaction with the script. Years later, however, Spielberg developed a working relationship with Tony Kushner, the Pulitzer Prize-winning playwright of Angels in America, among other acclaimed works; the two have worked together four times since 2005’s Munich. In Kushner, Spielberg seems to have found his ideal writing collaborator, in that Kushner is able to cut through what I’m sure Spielberg would admit are his natural sentimental instincts. So it was Kushner who he finally tapped to write his long-gestating, and often in doubt, Lincoln film.

Lincoln is not really a biopic, in that it’s not a cradle-to-grave account of the man’s life. Rather, it focuses on a very specific time in Lincoln’s presidency: the period near the end of the Civil War when Lincoln, alongside certain sympathetic members of his cabinet and Members of the House, worked to pass the 13th Amendment, which abolished slavery. The amendment was legally complex, and what Lincoln wanted, of course, was to not only pass it, but also bring the war to a close as quickly as possible. Doing both was no easy task, given that, however badly the South was losing by that point, negotiating peace with the Confederacy would be extremely difficult if they decided that Lincoln was offering them nothing in return.

Lincoln’s closest ally in the film is William Seward (David Straithairn), the Secretary of State, but one of the chief pleasures of Lincoln is watching how even those who share the president’s political and moral goals can grow frustrated with the man, either because his means can seem to them catastrophically short-sighted, or, in making his case for one thing or another, Lincoln’s way of speaking can seem needlessly oblique. At one point, Lincoln says to Seward (who in this scene has already thrown up his hands in hopelessness) “Time is a great thickener of things,” to which Seward replies “I suppose it is. Actually, I have no idea what you mean by that.” (Later, a long story Lincoln tells about Ethan Allen drives Edwin Stanton (Bruce McGill) from the room.) His cabinet indulges him when he tells his stories, or ramblingly builds on a point, until they don’t. And for his part, Lincoln quietly allows them their frustrations, and the times when they loudly disagree with him—perhaps because he knew the decision was ultimately his anyway—until he decides to stop being nice. One of Day-Lewis’s many show-stopping scenes comes in the last third or so of the film. For the umpteenth time, his allies are whining about the difficulty in procuring the necessary Democratic votes to pass the amendment, and Lincoln’s typical calmness splinters like a lightning-struck tree:

I can’t listen to this anymore. I can’t accomplish a goddamn thing of any worth until we cure ourselves of slavery and end this pestilential war! I wonder if any of you or anyone else knows it. I know! I need this! This amendment is that cure! We’ve stepped out upon the world stage now. Now! With the fate of human dignity in our hands. Blood’s been spilled to afford us this moment now! Now! Now! And you grouse so and heckle and dodge about like pettifogging Tammany Hall hucksters!

Needless to say, one of the reasons Spielberg hasn’t let Tony Kushner get away from him is because he can write like that. And what makes Lincoln such a rarity in this day and age is that it’s a Hollywood studio picture, on a massive scale, and there’s so much beauty in the writing, so much poetry in the prose. It’s almost unheard of now.

Lincoln alternates these scenes of political strategy and gamesmanship with the president’s domestic life, which is every bit as turbulent. Mary Todd Lincoln’s (Sally Field) mental health is in a tenuous state (or anyway it was deemed to be by those around her; Field, to her credit, does not lean on crazy tics or other easy ways to signal to the audience) following the death of their son Willie three years earlier, after losing another son, Edward, in 1860. As a result, she is even more adamant that her husband do whatever it takes to end the war as quickly as possible, thereby keeping her son Robert (Joseph Gordon-Levitt) from enlisting. This leads to some tension between husband and wife, and Lincoln explodes at her, the weight of an entire country already weighing down on him. He mocks his wife’s “inexhaustible grief,” and accuses her of acting as though he wasn’t suffering just as much alongside her. But there’s tenderness, too, as when Lincoln finds his other son Tad (Gulliver McGrath) asleep on the floor, with camera plates of slave photographs nearby, or, late in the film, a bittersweet buggy ride, during which Lincoln says to Mary, “We must try to be happier.”

These moments are quite moving, as is much of the rest of the film (that is when Lincoln isn’t being terrifically entertaining), but they have a punch to them that Spielberg skeptics don’t believe he’s ever been capable of delivering. He always has been, in fact, but having Kushner by your side doesn’t hurt. Anyway, on top of this is the fact that the film shows that Lincoln really is willing to do just about anything to get this amendment passed, and to end the war as soon as possible. Nothing less is acceptable to him, or to those closest to the issues who have any power to bring about such results. In justifying certain of his actions in his life, both as an attorney but especially as president, Lincoln says to Secretary of the Interior John Usher (Dakin Matthews), “I decided that the Constitution gives me war powers, but no one knows just exactly what those powers are. Some say they don’t exist. I don’t know. I decided I needed them to exist to uphold my oath to protect the Constitution.” That’s a hell of a thing to say out loud, but, given what was at stake, who would wish that he thought otherwise?

Later, Rep. Thaddeus Stevens (Tommy Lee Jones)—whose relationship with Lincoln is prickly, and his relationship with Mary is pricklier—says during debate on the House floor that he believes that all men are legally equal, thereby justifying the amendment, but they are not all actually equal, which would prove to those members of the House who were on the fence that, don’t worry fellas, we’re not going too far with this thing. That’s not what Stevens believed: he believed in actual equality. But to say so at this time would jeopardize everything. So he lies. Lincoln is, in part, about the nobility of compromise and the necessity of the occasional small lie in service of a greater truth.

The film does show the cost of some of these decisions. At one point, for instance, a wagon pulls up next to a ditch, and a large sack is unloaded from it. The workers dump out the contents, and we see it was filled with the severed legs of soldiers. And the whole thing opens with a battle scene. There are no scenes of the atrocities of slavery, but this battle is between a Confederate army of white men, and one of the Union’s black regiments. This might strike the viewer as somewhat lacking in subtlety, but within the parameters of Lincoln’s PG-13 rating, the scene is quite brutal (Spielberg’s instincts for depicting realistic, horrible violence are virtually unparalleled), so any thought along the lines of “Yeah, yeah, we get it” should be silenced when we see the two armies battling at close quarters, in the rain, in a swampy field of mud, and one man is killed by three others ramming bayonets into his stomach, and another is drowned by two other men, one shoving the drowning man’s head underwater with his boot. But the decisions Lincoln made led to the 13th Amendment being passed, and to the war ending as soon as was then possible.

And of course it’s all been smooth sailing since then. 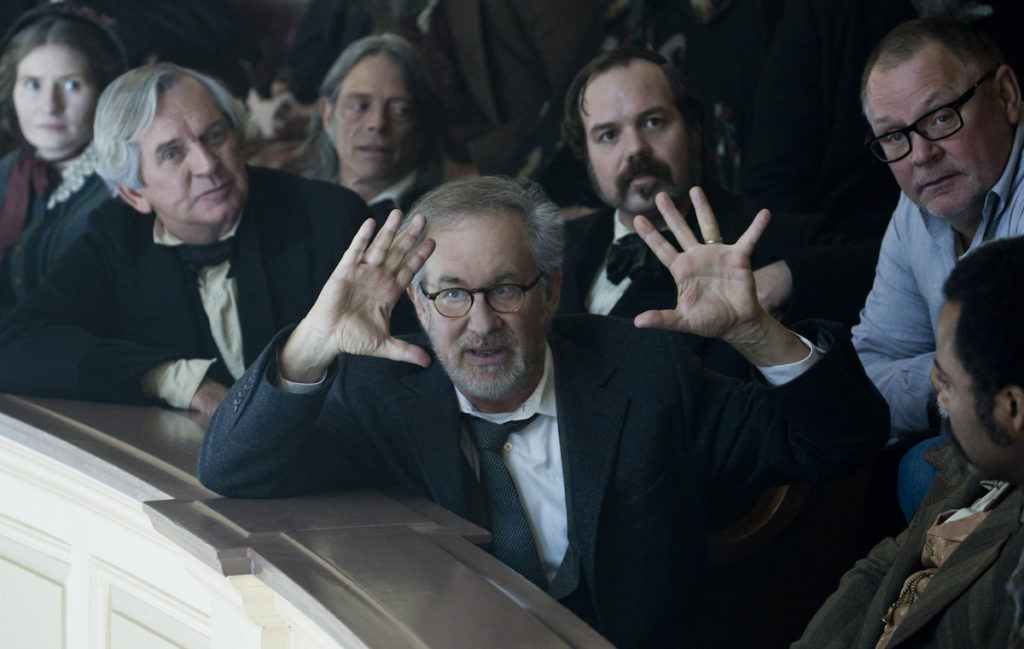 As sentimental as Spielberg often unquestionably is, neither he nor Kushner are naïve. In the film, Ulysses S. Grant (Jared Harris) says to Lincoln that he led the country through the war, “now you’ll have to lead us out of it.” This is a line with bite to it, because of course he was unable to do that. The very fact of Lincoln’s assassination after the war was over, and after the 13th Amendment was passed, proves that any kind of “Well there’s that problem taken care of, once and for all!” attitude is foolish. That’s at the heart of “now you’ll have to lead us out of it.” How much more good could Lincoln have done had he lived? How much better would the country be now? It’s pointless to ask, because he didn’t.

At one point in the film, Lincoln is getting ready to send a telegraph to Grant with instructions that strongly imply Lincoln is ready to negotiate peace with the Confederacy without passing the amendment. By the end of the scene, he has changed his mind, but along the way he asks the telegraph operator (Adam Driver; everybody is in this movie) “Are we fitted to the times were are born into?” And the telegraph operator replies “Well, I don’t know about myself. But you maybe. Sir. Fitted.” Throughout the history of this country, we’ve had decent and indecent men serve as president, but there have only been maybe a half dozen who were truly fitted to their times, and none more so than him. Lincoln is a fine testament to that fact. 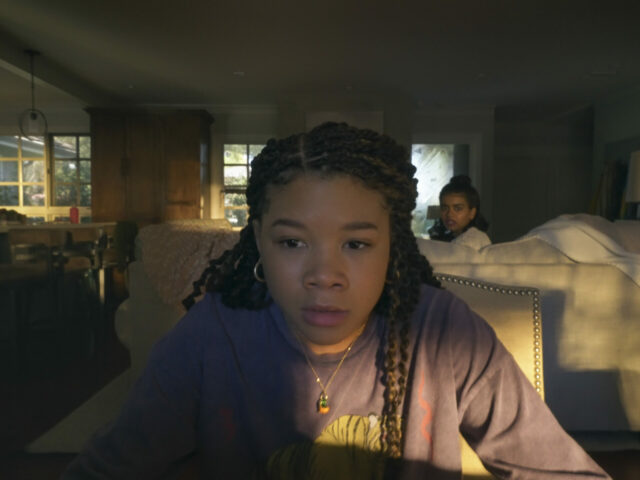