The pictures are striking: This past Saturday, on the second day of Turning Point USA’s pep rally in Tampa for right-wing college kids from across the country, neo-Nazis gathered outside the convention center in support of the organization, in support of Florida Governor Ron DeSantis, and, most importantly, to spread hate. Some images show members of NatSoc Florida—as in “national socialism,” Nazism—posing on the convention center steps, their faces obscured by dark sunglasses and white neck gaiters. Their gaiters and red shirts say “NSF,” with the “S” written as Nazi SS lightning bolts, and they carry a Nazi swastika flag and a Black Sun flag. There are reportedly signs that say “Free the J6 Political Prisoners.”

Other images show a cluster of members of the “Goyim Defense League,” an antisemitic group, wearing black neck gaiters with skulls on them as they carry antisemitic posters—some showing the antisemitic “Happy Merchant” cartoon. Someone spewed slurs into a bullhorn that has “Infowars” stickers on it. This group carries Nazi flags, including the SS Bolts flag—as well as a flag that reads “DeSantis Country.”

Turning Point USA criticized the Nazis outside their convention. Andrew Kolvet, a spokesman for the group, said TPUSA “100% condemns” neo-Nazi ideology “in the strongest of terms.” When the hosts of The View wrongly suggested that TPUSA was affiliated with the neo-Nazis (“you let them in and you knew what they were, so you are complicit,” said Whoopi Goldberg), the show was forced to apologize.

So before going further, let’s stipulate that TPUSA has no affiliation with the neo-Nazis who were outside their convention. It is safe to assume that most of the reported 5,000 students who attended the TPUSA convention find Nazi symbols and rhetoric abhorrent. (Indeed, some TPUSA participants apparently argued with the neo-Nazis.) Let’s further stipulate that to assume that any organization shares the views of whatever protesters parasitically glom on to its events is to engage in a lazy smear.

And yet, inside the convention hall, TPUSA hosted plenty of speakers whose far-right views and disdain for the American political mainstream troublingly overlap with the odious views of the swastika-wavers outside the hall.

There was Eduardo Bolsonaro. His father, Jair Bolsonaro, is the far-right president of Brazil, overseeing what increasingly looks like a fascist regime. A politician in his own right, the younger Bolsonaro has threatened to crack down on his political opponents in the way Brazil’s former military dictatorship did. Bolsonaro fils is also reportedly the South American liaison for Steve Bannon’s far-right “The Movement” organization.

There was Rep. Matt Gaetz, who remains under investigation for child sex trafficking. He took to the TPUSA stage to spout an anti-George Soros conspiracy theory—a common trope of antisemitic and white-supremacist rhetoric. Gaetz also used the occasion to pour vitriol on Black Lives Matter and to make the disgustingly sexist remarks that have been widely criticized over the last few days (“Why is it that the women with the least likelihood of getting pregnant are the ones most worried about having abortions?”).

There was Rep. Lauren Boebert, who has repeatedly called for collapsing the separation of church and state and has prayed for the death of President Joe Biden. On the TPUSA stage, she got hilariously tongue-tied when attempting to criticize Democrats on gender issues and made some creepy remarks about Ted Cruz. But then, after a rambling political rant, she told the assembled college students that “there is an identity crisis” in America today, that “the only place you’re going to find that identity is in Christ,” and that “we are in a fight for the battle [sic] of our nation.”

There was Rep. Marjorie Taylor Greene, who, in addition to ranting about vaccines and Anthony Fauci and why she thinks the United States should not oppose Russia and why Nancy Pelosi and not Donald Trump is responsible for the January 6th siege of the Capitol, said “I also call myself a Christian nationalist, and that’s not a bad word.”

And there was former President Donald Trump himself, who of course launched multiple lawsuits to overturn our election, whose counselors organized militia groups to attempt to overthrow the government, and who incited an armed mob to assault the Capitol. His speech on the TPUSA stage was typical for him: long and scattered, with lots of insults and a rehearsal of his claims that the 2020 election “was rigged and stolen.”

A bullhorn on the sidewalk. A dog whistle on the stage.

Turning Point USA cultivates a specific image. Its founder, Charlie Kirk, often wears a suit and carefully chooses his words while playing devil’s advocate—asking questions, not making statements. The group’s chapters proclaim themselves as a “student movement for free markets and limited government,” or as the “most organized, active, and powerful conservatives grassroots network on high school and college campuses across the country.”

But the group’s activities and some of the people associated with the group undermine that polished image. TPUSA runs a “Professor Watchlist” and a “School Board Watchlist” to target and harass academics and school board members. TPUSA rallies give a platform to figures who flirt with, or overtly scream, far-right conspiracies—like many of the speakers in Tampa. Some TPUSA members overlap with alt-right groups or actively promote them. Several TPUSA members and affiliates have engaged in overtly racist or white-supremacist activity, much like the TPUSA Facebook page. And while TPUSA has cut ties with a number of these figures, the Florida event was filled with members associated with the “groyper” movement of Nick Fuentes and Christian nationalist groups like American Virtue—Carson Wolf, Brandt Wiggins, Reggie Amerson, Tyler Russell, AJ Willms. And for the last decade, the movement has become progressively more Christian nationalist.

Is it any surprise that a group blowing such dog whistles attracts disturbing and disturbed people, such as the audience member at a Charlie Kirk speech last year who asked Kirk, “When do we get to use the guns? . . . How many elections are they going to steal before we kill these people?” Kirk had just finished saying “I refuse to believe, at my core, that this bumbling fool”—Joe Biden—“got 82 million votes.” And while Kirk perfunctorily said he “denounce[d]” the man’s suggestion of violence against Democrats, Kirk made clear that he believes “we are living under fascism; we are living under this tyranny.”

Charlie Kirk didn’t have a bullhorn on that stage last year. And he explicitly said he “denounce[d]” the suggestion of violence. But the dog whistle is easy to hear: fascism; tyranny; a stolen election. It is an implicit invitation to extremism. It is superficially a rejection of violence while coyly describing a justification for violence.

We have seen this sort of thing before, in the Long Southern Strategy. Richard Nixon, Barry Goldwater and others appealed to Southern racists with coded phrases like “law and order,” something updated by Donald Trump.

We can debate starting points and phrases, but the dog-whistling is key—something clearly understood by the alt-right and by neo-Nazis. And we forget this sometimes, that this is a well-known part of American history. We remember the Second Klan, with burning crosses stolen from movies and pointed hoods and their attacks. We need to remember the photos taken by local newspapers of groups of well dressed, unmasked, white townsfolk posing with the lynched bodies of their victims—not just the men in masks doing it.

Few people want to stand beside the Nazis, swastikas waving in the air; but call it “great replacement” and the belief isn’t fringe. Say the 2020 election was stolen and it’s a majority view in the GOP. Ask American voters if they should take up arms against the government and one poll says a fourth of them are open to it.

Put down the bullhorn, say the quiet part quietly, and all of a sudden fascism becomes mainstreamed. 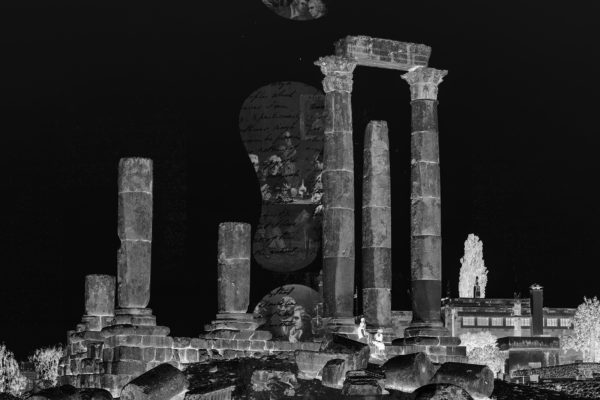