The GOP Is Playing Itself

When you’re a Senate staffer, you get used to long nights with silly amendments being added to bills under consideration, often sponsored by senators making posturing speeches. During budget season, we call this the “vote-a-rama”—late-night boxing matches of “gotcha” amendments designed to dare the other side to cast a politically unpopular vote. One side lands a blow, then the other does. A lot of these amendments exist only to become the basis of campaign ads—Senator So-and-So fought for your right to X, or The Such-and-Such party opposed sensible reform measures, that sort of thing. The policy in question usually remains unchanged, but there’s a record ready for a 30-second commercial for the following election. It’s a waste of everyone’s time, but that’s the tradition and the Senate is, heaven help us, all about tradition. You just have to put up with it.

Republicans in Congress—both because they are in the minority and because the party cares more about culture war these days than about policy—have been less focused on legislating and more focused on turning any hearing or debate into a circus. That showed on Tuesday night, as Democrats pushed through both an infrastructure bill and a budget resolution, and Republicans attempted stunt after stunt.

Sen. Tom Cotton, with Sen. Joe Manchin’s support, got a meaningless amendment passed that established a “​​a deficit-neutral reserve fund relating to prohibiting the teaching of critical race theory in prekindergarten programs and elementary and secondary schools.”

What, you ask, are deficit-neutral reserve funds, or DRNFs? They are

completely inconsequential amendments offered as a way to discuss budget-irrelevant topics without violating budget reconciliation rules around what you can and can’t include in a budget resolution.

If you’d like to get nerdier, I’ve got you covered.

Remember, most of these amendments are about messaging. Did Tom Cotton stop critical race theory from ever being taught? No. But when he runs for re-election, he will probably suggest in an ad that he did. Most voters don’t know that DRNFs are meaningless bullshit.

Still, meaningless though it was, that was probably the GOP’s lone messaging win of the night.

Without going too far down the budget-wonk rabbit hole, a budget is an authorization framework for eventual appropriations bills. Budget amendments do not bind Congress to anything. Nor are they law.

Sen. Tommy Tuberville proposed a DNRF “relating to decreasing Federal funding for local jurisdictions that defund the police.” Thinking that Democrats would oppose the amendment, Tuberville instead saw it pass 99-0—as Democrats were eager to go on the record opposing the left-wing slogan. Even Bernie Sanders voted for the amendment. New Jersey Sen. Cory Booker, ebullient, thanked Tuberville for throwing the Democrats a pick six:

"This is a gift," Cory Booker says in an animated speech praising Tommy Tuberville's non-binding amendment to punish localities that defund the police.

"I am sure I will see no political ads attacking anybody here over defund the police."

It passed 99-0, all Dems voted for it. pic.twitter.com/GUqAfcSlxH

Another GOP failure came from Missouri’s Josh Hawley, who proposed a DNRF “relating to hiring 100,000 new police officers nationwide to combat the crime wave in the United States.” Where did Hawley mess up? The Community Oriented Policing Services or COPS program was started by . . . wait for it . . . Joe Biden.

Hawley:Let’s put 100k new cops on the streets
Durbin:This has been an historic day in the Senate. We started by passing a bipartisan infrastructure bill and now the Senator from Missouri is finally coming around to supporting the COPS program that was created by Senator Joe Biden pic.twitter.com/qtoGdsMEuA

the Put Families’ Safety Ahead of Politicians’ Private Security amendment Tuesday. Ernst’s amendment would prevent politicians from using taxpayer dollars for private security until D.C. recognizes concealed carry permits in all 50 states. The amendment comes after recent revelations that progressive lawmakers who support defunding the police, including Squad Rep. Cori Bush, D-Mo., use taxpayer dollars to fund their own private security details.

In this case, Ernst tried using the GOP’s gun fetish at the cost of putting fellow lawmakers at risk unless they require the nation’s capital to accept concealed-gun permits from states that don’t even require training to carry a concealed handgun. Great going.

The GOP is locked in for 2022. They’re not trying to appeal to the voters they lost in 2020 (like me). The party is now entirely a service-the-base operation. Whether it will work for them is anyone’s guess, but many Republican officeholders prefer owning the libs to actually governing. Too bad for them that they’re not even very good at owning the libs. 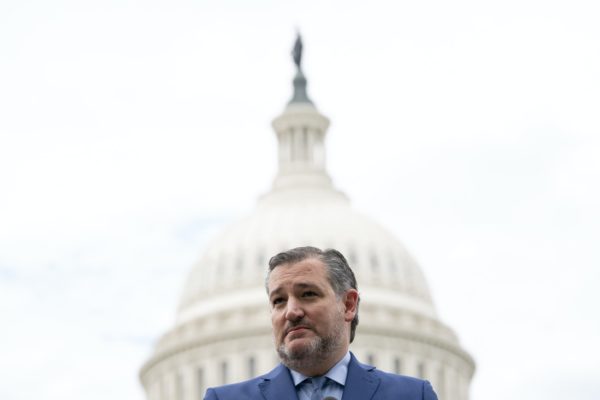