‘The Harder They Fall’ Review

The opening 15 minutes or so of The Harder They Fall are among the best 15 minutes of any movie I’ve seen this year, alternatingly taut and frenetic, as stylish and stylized an introduction I can remember seeing on screens large or small. The rest of Jeymes Samuel’s feature can’t quite match that bravura quarter-hour, but it is a beautifully shot, amusingly acted, and fairly exciting piece of entertainment throughout.

Samuel moves us through three completely different modes in that opening quarter hour. The first is one of nearly existential dread, a nihilistic turning of the screw during which a young man watches a gunslinger whose face we never see enter his family’s home, calmly sit his mother and father at the dinner table, and gun his folks down in front of him before carving a cross into his forehead.

This boy grows to be Nat Love (Jonathan Majors), and in the second segment of this opening stretch Samuel goes Full Peckinpah as Nat guns down one of the faceless gunslinger’s accomplices in a blood-spattered frenzy. Nat whips out his six-shooter and blasts the tattooed man dead, his body lifted off the floor as each bullet leads to a freeze frame with a word from the title splashed on the screen: BANG (The), BANG (Harder), BANG (They), BANG (Fall), leading to a title sequence-cum-music video in which we are introduced to the players, the Nat Love Gang and the Rufus Buck Gang.

At which point Samuel slides into a more traditional western mode. Jim Beckworth (RJ Cyler) and Bill Pickett (Edi Gathegi) of the Nat Love Gang—notorious for robbing robbers, the philosophical forefathers of Omar little—pin down the Crimson Hood Gang, which has just lifted $25,000 from a bank, in a canyon. The shootout is fine, but it’s the patter and the patois that shines here, dialogue that isn’t exactly fancy but is funny and well done, culminating in a villain saying, “You know what? I’d rather be dead than hear this motherfucker keep talking.” Needless to say, he is obliged. 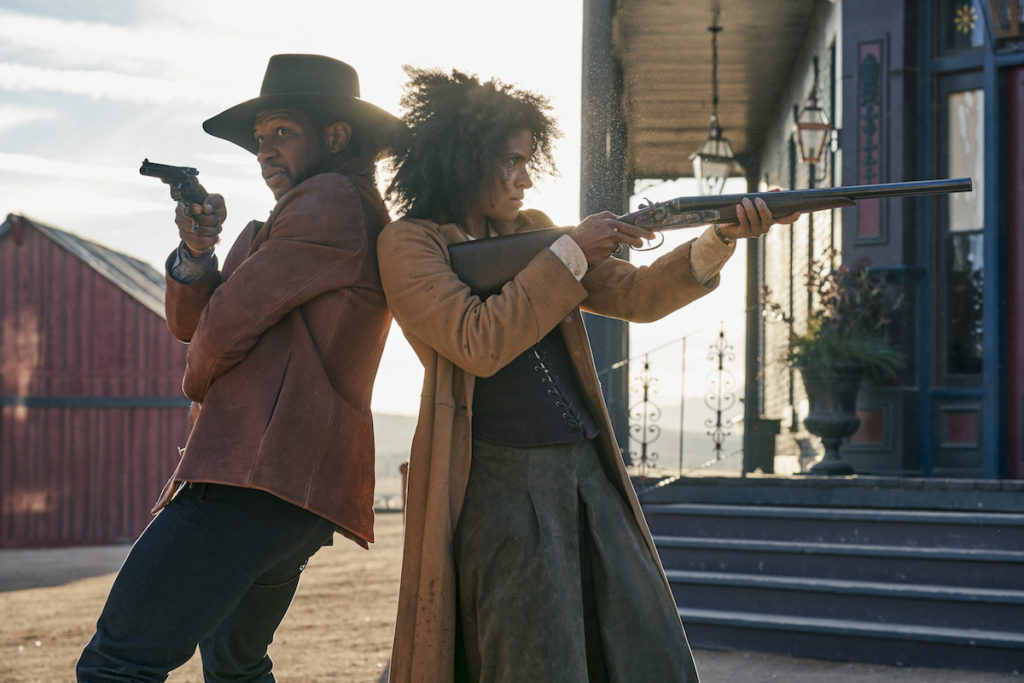 Again, this is all wonderful. But then we get bogged down in plot. Bear with me:

Jim and Bill head back to Douglastown with a prisoner and $25,000 of Rufus Buck’s (Idris Elba) cash. Buck himself is in prison, his gang being run in the meantime by Trudy Smith (Regina King) and Cherokee Bill (LaKeith Stanfield), but they break him out in short time and head to their home base of Redwood, to which Nat Love, his gang, his erstwhile girlfriend Mary Fields (Zazie Beetz), and U.S. Deputy Marshal Bass Reeves (Delroy Lindo) are headed to take down Buck. (You may recognize some of the names here: The characters are based on real people, though this is a fictionalized story.) Redwood isn’t just the base of operations for a bunch of gangsters: It’s supposed to be a free town for black citizens, a post-Civil War dream that might come crashing down because the corrupt mayor/sheriff left in charge by Buck has promised it to the highest bidders when the territory is opened for settlement.

There’s a lot going on here—Nat wants revenge against Buck for killing his folks and scarring his forehead; Mary wants to keep Nat safe and will risk her life to do it; Reeves wants to take Buck down because Reeves is a cop and Buck’s a robber—but the most interesting idea in the film is merely gestured at.

“How we supposed to build Mecca without any bricks?” Cherokee Bill asks while the Buck Gang is discussing the Nat Love Gang’s robbery of their robbery. And this is the unexamined heart of the movie. “You think I made Redwood for myself?” Buck asks a man who declares he isn’t paying the “tax” that Buck and his gang are levying to protect Redwood from ravaging at the hands of rapacious whites headed to take what they built. “To what end? Redwood ain’t a hiding place, ’cause I don’t hide. It ain’t a dream—I don’t dream. You know what it is? It’s an example. It’s an example for others to follow. And you … you are an enemy of progress.”

And we all know what happens to enemies of progress, particularly when those initiating progress are holding the guns.

Again: interesting idea here! Nat Love’s desire for revenge and his effort to rescue the captured Mary is a fine hook on which to hang his motivation, but what Buck is building is far more intriguing, far more nuanced. An examination of the tension between the townsfolk of Redwood and the gangsters trying to build a free land for an oppressed people would’ve added an incredible layer of depth to The Harder They Fall … but after this scene the townsfolk more or less disappear. We are left to imagine how they feel about Nat Love showing up and shooting the town to hell. There’s a climax and a gunfight and the parties go on their way. But the twin fates of the town and its residents are never brought up again.

Combined with a third act revelation, we’re given a tantalizing glimpse into a deep reservoir of idealism—real “brotherhood of men” sort of stuff—underneath Nat’s calculating cruelty and commitment to violence. But that’s all it is, a glimpse. As credits rolled, I was left wanting more about that and less about most everything else. Were they cowards like the townspeople in High Noon? Did they pool their resources to find champions, like the common folk of The Quick and the Dead? Did they band together to ward off villains, as in Open Range? I guess we’ll never know.

Still, this is a relatively minor gripe about a decidedly entertaining flick. Samuel and head of casting Victoria Thomas have assembled a truly magnificent multigenerational collection of black actors for this revisionist western. Director of photography Mihai Mălaimare Jr. deserves a great deal of credit for the look and the feel of this film; you can practically see the textures of the fabrics, of the buildings, of the sand and stone on the screen. And the set designs are something else; the city of Redwood feels like a Technicolor nightmare, all bright reds and blues, a gleaming white chapel at the end of Main Street serving as a reminder of the indecency of all that unfolds before it.