‘The Ice Harvest’ Is a Christmas Movie

Harold Ramis—actor, legendary comedy writer, one of SCTV’s original cast members, and film director, among other things—is likely best remembered by the general public for his portrayal of Egon Spengler in Ghostbusters, and by those who care to know which directors made which films, for directing such classic comedies as Caddyshack, National Lampoon’s Vacation, and Groundhog Day. Directing became his chief occupation post-Ghostbusters—he rarely acted after that, and when he did his roles were usually constrained to a scene or two—yet his last picture, the poorly received Year One (2009), was only his eleventh. When remembering Ramis, there is a tendency to celebrate only much-loved classics like Groundhog Day.  But Ramis’s penultimate movie, The Ice Harvest (2005) is, for my money, one of his best, not only a terrific crime thriller, a very funny black comedy, and a marvelous vehicle for its star John Cusack, but also, finally, an offbeat Christmas classic, one that finds a way to be both jaundiced about the holiday, and sincere about its power.

Based on a novel by Scott Phillips, with a screenplay by Pulitzer Prize-winning novelist Richard Russo and Oscar-winning director and screenwriter Robert Benton, The Ice Harvest takes place over the course of one Christmas Eve night in Wichita, Kan., as various illegal schemes set up by or involving lawyer Charlie Arglist (Cusack) come slowly to a head, all while a debilitating ice storm looms. One of those schemes, stealing nearly $2 million from his mob boss client Bill Guerrard (Randy Quaid), involves a rather vile and hateful partner named Vic Cavanaugh (Billy Bob Thornton). Charlie’s other scheme pairs him up with a stripper, Renata Crest (Connie Nielsen), who wants Charlie to retrieve a photo of herself having sex with a local, and hypocritical, politician (David Pasquesi) for blackmail purposes. Complications arise: Vic is untrustworthy; Charlie is in love with Renata; and one of Guerrard’s enforcers, Roy Gelles (Mike Starr), seems to be following Charlie around town.

If this sounds like a considerable amount of plot to fit into a movie that lasts just 89 minutes, with credits, one of the most impressive things about The Ice Harvest is how casually it unfolds, making plenty of room for comedic and dramatic character moments that are completely removed from genre trappings. A long section in the middle of the film features Charlie meeting up with his old friend Pete (Oliver Platt) in a bar. By this point in the evening, Pete is very drunk (and Charlie, despite the danger he’s in and all the balls he has to juggle, is working in the same direction), and Platt, it must be said, goes for broke. The tone of The Ice Harvest is fairly delicate: though effectively a comedy, it’s also an occasionally rather violent thriller that additionally hits points of serious, affecting emotion throughout; Platt’s performance could have pushed the whole thing horribly off-balance. Yet it doesn’t. Instead, it provides the core of the film’s emotion and its reservoir of Christmas spirit (and I do not use that phrase ironically). And while certain plot points are touched on just to keep things rolling, this section of the movie is largely just a melancholy hang-out between two friends, one of whom probably won’t remember much of what is said the next day.

During this sequence, Charlie and Pete will at various points end up in situations where one or the other of them will be revealed as less sympathetic than perhaps the audience would like them to be. After their initial meeting, Charlie and Pete go to Pete’s house, where his wife, step-children, and in-laws are trying to enjoy Christmas Eve dinner. This is fraught for a variety of reasons, including Pete’s intense drunkenness, but mainly because Pete’s wife is Charlie’s ex-wife. Charlie doesn’t care about this, but he does care about his children. When the two men blunder into the dining room, Charlie’s daughter is delighted to see her father, but his older son is disgusted. What the film denies us in backstory is made clear through the contrast between the coldness of the ex-wife and son and the warmth of the young girl; Charlie is neither blameless nor some kind of devil. Similarly, Pete behaves abhorrently—the father-in-law says to Charlie and Pete “You make me ashamed to be a man” and it’s not hard to see where he’s coming from—but on the other hand, it’s clear that this extended family is so fucked up that none of the adults are going to get out of this unscathed. Later, sitting at a red light, Charlie and Pete talk about regret. Pete’s flamboyance, which is a put-on anyway, fades: “Guys our age, what else is there?” Charlie argues that regret is useless, citing the similar fates suffered by his father and uncle despite their opposing approaches to life. This absence of regret won’t last. 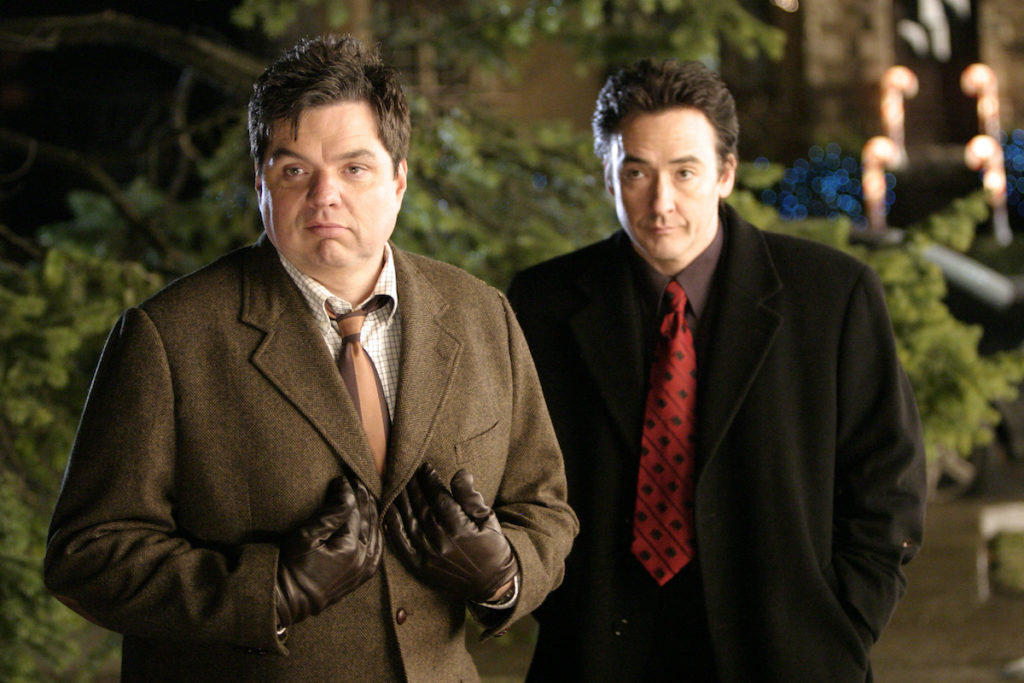 Pete is blitzed throughout the film, which subtly obscures how much Charlie drinks. Whenever he can drink, he does drink. It’s one thing when he’s at a bar or strip club (both of which he visits multiple times during the night, which, again, is Christmas Eve); it’s another thing to slip into your ex-wife’s house after everyone’s asleep and, while there, help yourself to whatever’s on the sideboard. Or, in perhaps my favorite scene in the film, when he goes to a convenience store to buy cheap toys for his children at the last minute, because he’d forgotten to get them anything before (or perhaps it never occurred to him to do so, or perhaps it had and he dismissed the idea until his daughter hugged him—we’re not told). He takes a beer from the refrigerator case, opens it, and starts drinking. The cashier doesn’t take issue with that, but he does snipe “Big spender” when he sees the toys. Charlie replies “You got kids?” and when the cashier says he doesn’t, shuts the conversation down: “Then shut the fuck up. Bag it.”

Cusack really is tremendous here. As the night goes on, the actor transforms Charlie’s initial good-humored, though somewhat-panicked, optimism that his plans are going to work out fine and he’ll be able to flee Wichita once and for all, into a kind of moral exhaustion. He’s drinking to cover the regret that’s blossoming in his soul, despite claiming earlier that regret is a useless emotion. He regrets how he’s lived his life (he is a mob lawyer, after all), how he’s treated his family (perhaps his daughter still loves him only because she’s still too young to know better), and the violence that has swept through the lives of the people involved in his different illegal plans. In a sense, the violence he witnesses strengthens Charlie’s morality—watch his reaction when Vic fires a bullet into a trunk in which Guerrard’s enforcer Roy has been trapped—but, as with the encounter with his two children, this is because it reminds him that he never had a moral sense in the first place. And the beauty of it all is that the film never tells us that any of this is going through Charlie’s head. The audience knows it because of what Cusack, and Ramis, show us. His face slowly becomes a mask, he speaks more slowly, and less often, as the film progresses, and as Charlie becomes engulfed by a kind of existential sadness.

If the phrase “existential sadness” calls to mind another Harold Ramis film it’s Groundhog Day. It and The Ice Harvest have quite a bit in common, in fact, not least the surface plot device of two deeply flawed protagonists unable to escape an unhappy situation due at least in part to inclement weather. More importantly, Bill Murray’s Phil Connors in Groundhog Day and Charlie Arglist follow similar psychological paths: as their situations grow, seemingly, ever more hopeless, each man goes through stages of emotional reaction, ranging from optimism (Charlie starts off that way, Phil eventually gets there) to fear to acceptance. Acceptance, that is, not just of their situations and fates, but of who they are as people in the world, and the wrong they’ve done, and how to move past that. (I would like to reiterate here that both films are extremely funny.) 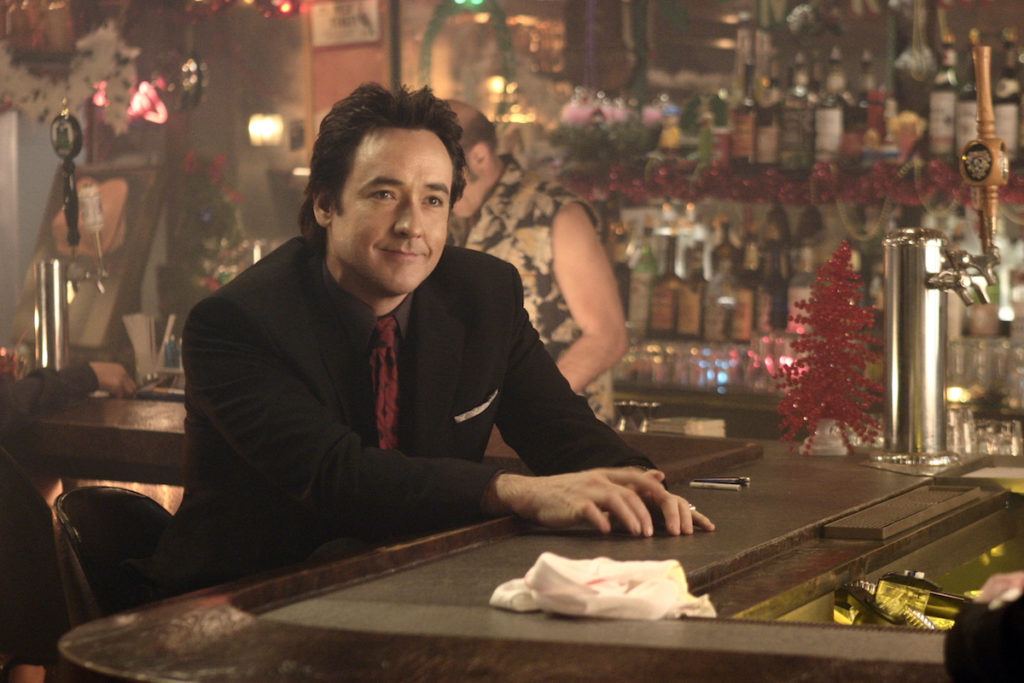 Which brings me back to Christmas. Typically, this is not a holiday that is meant to make those who celebrate it feel an overwhelming sense of remorse and sorrow, or to dwell endlessly on one’s own mortality. But let’s be honest, it can sure have that effect on a person anyway, which is at least part of the reason Christmas means so much to so many people—it contains multitudes—and why The Ice Harvest succeeds at being a genuine and unironic Christmas movie. Like A Christmas Carol, The Ice Harvest is about a bad man who by the end of the story becomes better. Charlie’s betterment is not so flamboyant, and not nearly as unambiguous, as that experienced by Scrooge, but it’s there, and it’s real. Charlie does leave Wichita behind, which means he leaves his children, but Cusack’s face tells us that given who he is, perhaps that really is the right thing to do.

There are a couple of alternate endings including with the DVD of the film, both of which feature Charlie dying at the end in an intentionally ridiculous freak accident. While I’m not against the kind of nihilism at the core of these endings—there’s a place for everything—I believe the decision to change it was the right one. I like that The Ice Harvest for all its violence, betrayal, amorality, even sociopathy, ends up being something less cynical than that. Things may be fucked up, Charlie Arglist’s growth may be minimal, even microscopic—regardless of the fact that his moral compass seems to be coming back in line by the end of the film, he does very few things that are actively positive—and it’s probably on some level too late for him. But maybe not for you.